Is there objective proof that recent bills (1st half of 2021) that restrict voting are targeting Democratic voters specifically?

In 2016, Georgia and Arizona had 2 Republican senators. This year, in 2021, they both have 2 Democratic senators each. There are rumors that the GOP is trying to stop groups of people who are more supportive of Democratic candidates from voting as easily in strategic locations (ie swing states). Additionally, they also seem to want to curtail mail-in voting as it favored the Democrats recently.

Those states were the targets of what were presumably failed attempts to stop Democrats from voting. Map of proposed legislation: 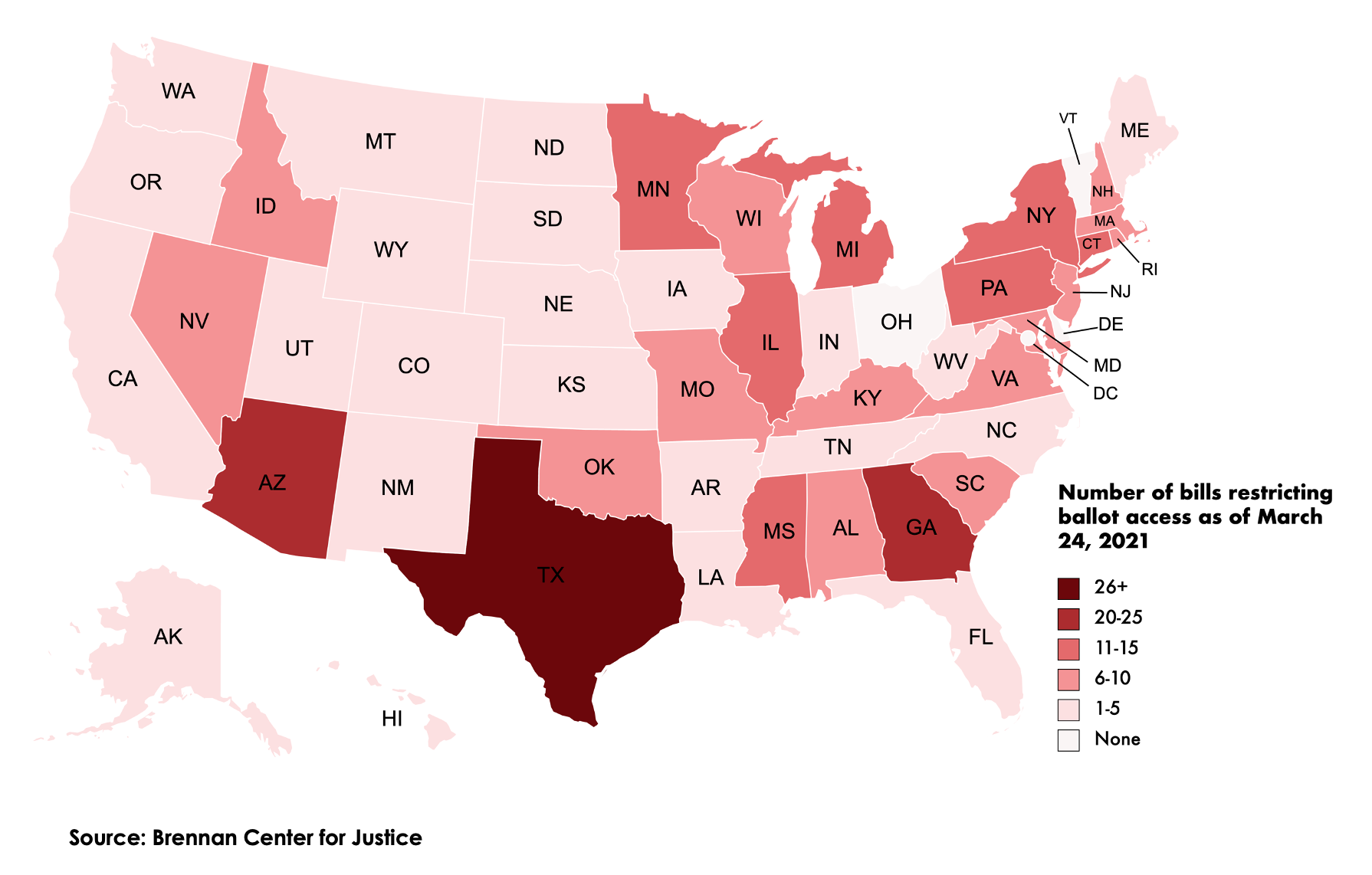 I want to focus on Texas, Arizona, and Georgia. In Arizona, there was an audit that some view as fake. Texas has the most shown on this map by far, and Arizona and Georgia are not far behind. It is important to note such bills that are in blue states with Democratic legislatures like New York, Illinois, and Massachusetts that receive these are basically dead on arrival.

Those are 3 states that Democrats have been fighting for since 2016, when they narrowed up significantly at the presidential level while the rest of the country shifted towards the GOP. Relative to the nation, these states have shifted 10, 8, and 7 points respectively towards Democrats from 2012 president to the 2020 presidential election.

Is there objective proof that this wave of restrictions is being pushed to hurt the Democratic party, particularly in presidential and Senate elections?

Note: the first part (did they want to do so for this reason) is proving intent, and the second is statistical evidence. And Chamber of Commerce v New York says that this type of voter targeting is not legally permitted.

The whole foundation of the strategy that gives rise to these voter suppression laws is to avoid exactly that direct, causal link. The recent Supreme Court case Chamber of Commerce v. New York reaffirmed that it's not legitimate to simply target voters that don't agree with you. So you're essentially asking to be shown the ways in which people executing this strategy have failed to maintain the necessary cover.

This requires that we acknowledge that such a standard runs counter to the legal standard which includes, from that same case:

For the purposes of the law, it is enough that we take their word for their own motives, most damningly from the former RNC Redistricting Chair, Thomas Hofeller - essentially one of their top strategists regarding structuring voting rules:

This was also the justification for the "citizenship" question on the 2020 Census, and Hofeller's own admission in those files was key evidence for the North Carolina redistricting plan to be thrown out by courts.

The studies that inform these strategies are not published widely, and so for them to be available to you first requires a breach of GOP security (in this case, Hofeller's daughter came into possession of the data after Hofeller's death, where a more secure system would have been to destroy the data or not have it held by a human person).

Other Republican Lawmakers have slipped up, being caught complaining about how certain demographics vote, such as NH House Speaker William O'Brien, bemoaning that college students using same-day registration were:

...kids voting liberal, voting their feelings, with no life experience.

Which, when combined with surges in college student voting, cast Republican efforts to eliminate the ability for college students to register to vote at the campus where they live in a particular light.

Links like this are entirely circumstantial, however, as is most evidence of motive absent explicit admissions such as the Hofeller files.

Everything else that remains is merely empirical data that the fruit of these laws does directly, and disproportionately impact Democrat voters - because it directly, and disproportionately impacts non-white, hispanic, and low SES voters. Making voting require special documents means requiring that voters have the time and resources to obtain those documents. Closing polling locations in minority neighborhoods raises the average amount of time that the act of voting takes - raising the opportunity cost of voting: the wages one might have earned at work instead. The list goes on.

So to review: No, it is highly unlikely you will find data directly linking voter suppression strategies to their impacts. But there is ample data that voter ID laws, the closure of polling places, and other efforts do have these impacts, are championed chiefly by Republicans, opposed chiefly by Democrats, and that Republican strategists do this research for the purposes of informing similar efforts.

That is enough for a reasonable person to conclude that the likelihood of there being a premediated motive in play is sufficiently high.

It is difficult (or impossible) to give objective proof of motivations, which are inherently subjective. It's additionally difficult to give proof of the motivations of entire political parties, which in a two-party system are inevitably odd coalitions of people with disparate goals. I would suggest that the most diplomatic response could be the following.

Avoidance of fraud, and securing voting rights, are both valid political goals for a democracy.

Therefore it makes perfect sense that each party would emphasize the valid political goal which also happens to give it an electoral advantage. Perhaps in an ideal world both parties would pursue both goals with equal vigor, but.... this is politics.

And again, in the spirit of diplomacy, I'll point out that in order to explain the facts, it's not necessary to claim that Republicans want to disenfranchise people, or that Democrats are indifferent to voting fraud, or that either party prioritizes its electoral success over the integrity of elections.

54
Is there evidence that the Republican Party leadership wants fewer people to vote?

19
What has divided US politics so severely since Bill Clinton's election?
16
In 2016, why did the GOP win the House popular vote while Clinton won the popular vote?
6
Was the Democratic vote less efficient in 2018 than in 2016?
6
Are Democratic voters more firm in their voting preferences?
7
Why are Colorado and New Mexico "bluer" than surrounding states?
0
Why haven't Arizona, North Carolina and Georgia been called a week after the election?
11
Did Biden win every state (that he won) by more votes than Clinton?
0
Does this image represent interstate migration?
5
Why is the western portion of the USA moving towards the Democratic Party while the Midwest is moving towards the GOP?