Is there a new divide between college & noncollege with *non* white voters in the US?

College graduated voters have been said to be trending towards the Democrats and the opposite with non college individuals. But that discussion seems to be isolated to white voters.

I have seen reporting that Biden did better with college graduated voters who aren't white versus non-white non-college-graduates. This appears to be a new development, as it said that the opposite was true before 2020.

Is there a new divide between college & noncollege with non white voters in the US?

There Currently Isn't A Significant Education Gap For Non-White Voters

In 2020 there was not a statistically significant difference between the voting preferences of non-white voters with and without college degrees.

The CNN exit polls from 2020 did not show a big education divide among non-white voters. The data isn't very fine grained, but there doesn't appear to be the huge disparity seen among white voters.

Associated Press exit polling from 2020 also shows that there isn't much an education disparity among non-white voters after controlling for gender. 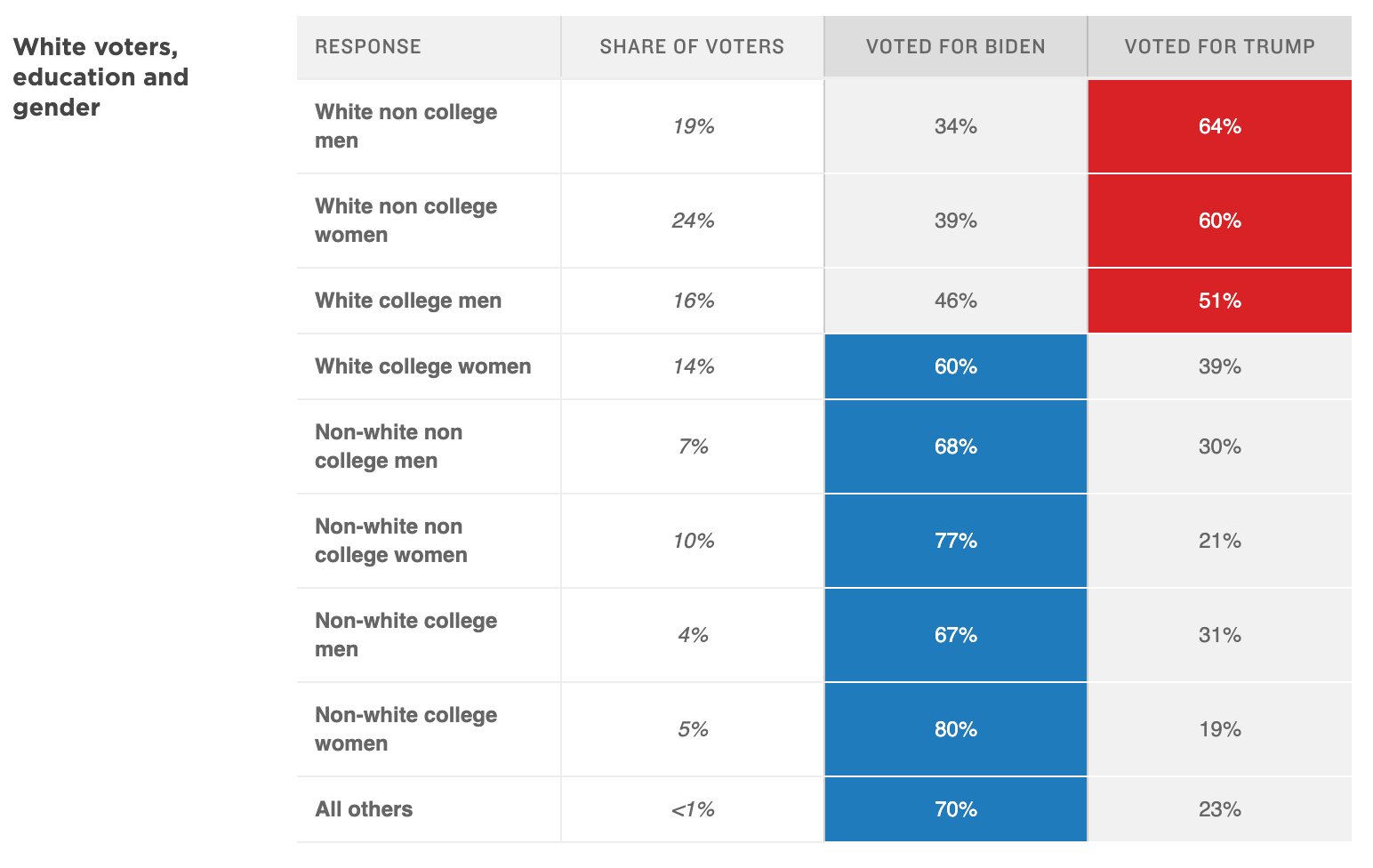 There were some subtle shifts between 2016 and 2020, but these weren't all that significant nationally. Most of the shift that was observed involved rural Hispanic voters with support shifting in the direction of their white neighbors in some areas like Southern Texas and the San Fernando Valley of California.

I haven't seen a longer run trend mentioned in the press in recent decades. This is because there really isn't one.

It is difficult to locate direct statistics on college educated v. non-college educated non-white voters, but a chart from the Pew Center does make it possible to infer this because it shows both totals and a break out chart for white voters only, knowing that roughly 75% of voters are white. 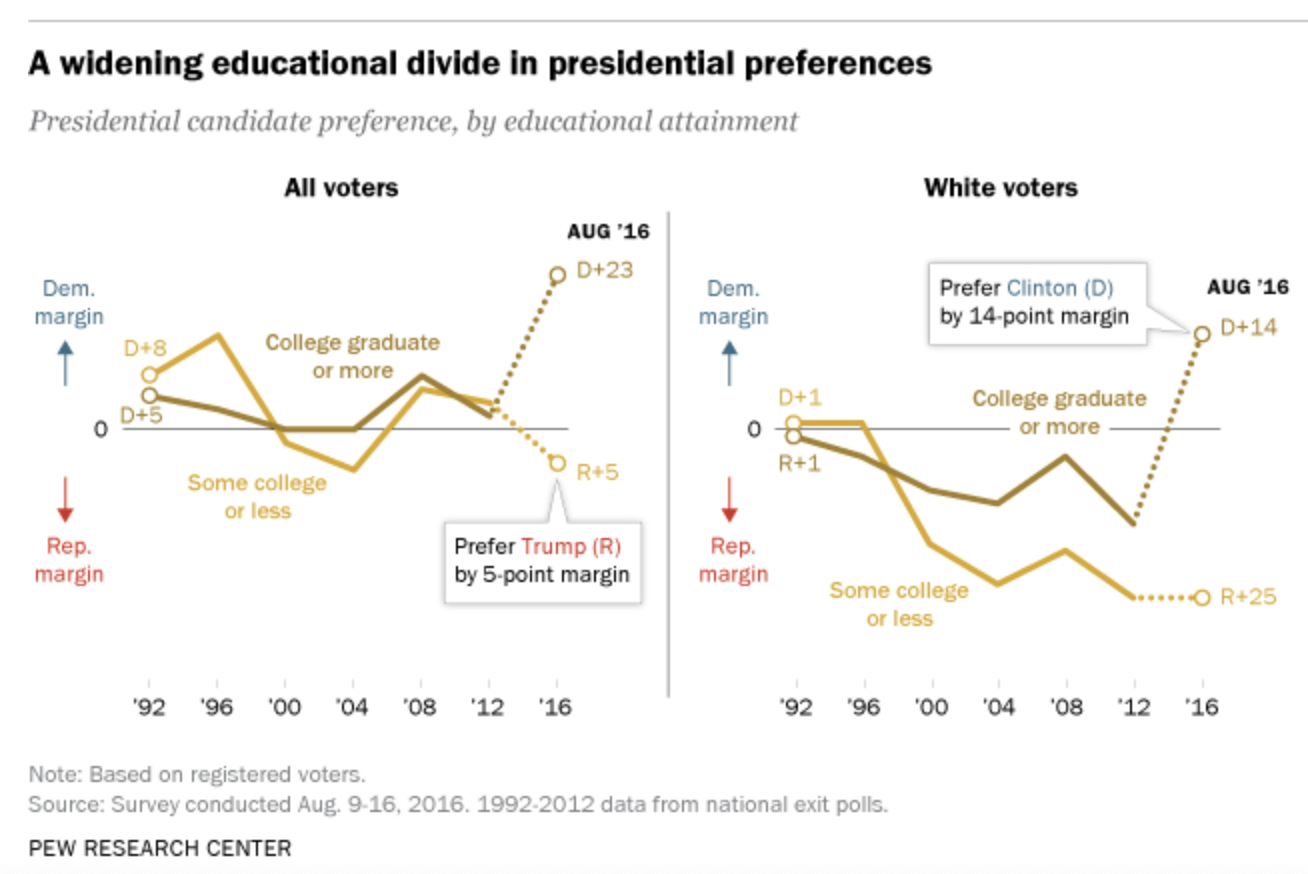 Basically, as recently as 1992, there was not a significant partisan education discrepancy in voting behavior for either white or non-white voters. The left leaning trend for college educated voters first emerges in the Bush v. Gore election in the year 2000.

Since then, the lion's share of the discrepancy overall has been driven by an emerging divide among white voters that has not been shared significantly by non-white voters.

Most of the divide is even more recent. The education divide in 2016 and 2020, even among white voters, is specific to the Trump era and was not nearly so pronounced before that point.

Footnote On Native American and Asian Voters (The Data Is Bad)

The data regarding Native American, Alaska Native, Asian, and Pacific Islander voters was very inconsistent between CNN and AP exit polling. This is likely due to insufficient survey sizes for these populations, so it isn't really possible to draw reliable conclusions from that data.

Also, the U.S. population counted as Native American, Alaska Native, Asian, and Pacific Islander is not at all homogeneous on socio-economic variables, and a breakdown by education within this group (with even smaller subsamples) is likely to be capturing ethnic subgroup differences as much as they are capturing intra-group differences driven by education, as suggested by the following chart: 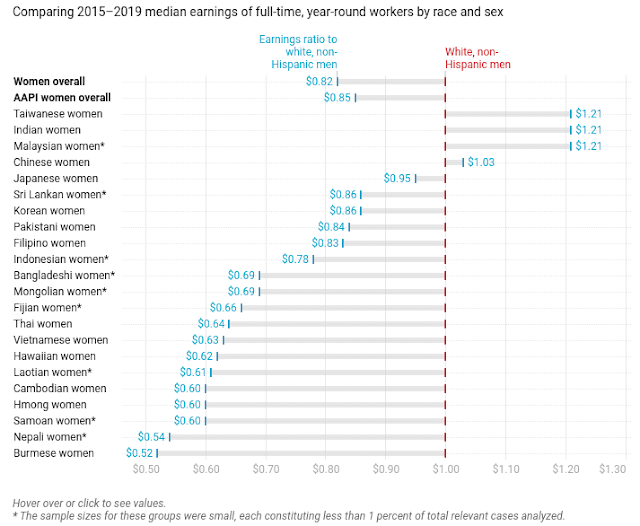 (Source) (the specifics are less important in this case than the general trend that there is a great deal of variation between subgroups of this census categorization.)

For example, according to the CNN exit polls for the 2020 election linked above, Hispanic support for Biden was highest among Catholics 71%, then those with no religious affiliation 55%, and then Protestants 51%.

48
Why does having a college degree make a difference to how white Americans vote?

6
What is the difference between different non-vote strategies in Italy?
13
Are there countries with upper age limits for voters or candidates?
1
What is the difference between Electoral College and Electoral District?
31
Is there a *political* schism between former Soviet Jews and other Jews in the US?
6
How do crime rates compare between Black and White populations of similar economic status, particularly for those below the poverty line?
9
Is an arrangement like the US Electoral College that unusual? In the sense of intentionally granting extra representation to smaller groups of voters?
16
Why is there such a large difference between the US population and electorate?
2
Why is Biden losing the support of non-white American Democrats?