Why does the EU require reciprocity to classify China as a safe country (for the purpose of Covid entry regulations)?

There is an EU travel ban in place for non-essential travel, except from EU/EEA/Schengen countries and certain safe countries.

Based on the criteria and conditions set out in the recommendation, as from 18 June 2021 member states should gradually lift the travel restrictions at the external borders for residents of the following third countries:

Why is such reciprocity required for Mainland China but not other countries (e.g. Japan, USA, Australia, New Zealand)?

Has the EU or any relevant officials or sources justified this decision?

The EU has made no official statements saying why it added the condition of reciprocity in reducing travel restrictions for travel from China.

An E.U. spokesperson declined to comment on why the extra criteria of reciprocity had been applied to China. But two E.U. diplomats involved in the negotiations said the extra layer was included because of continued skepticism among some European countries about the hard-to-verify accuracy of China's coronavirus data.

As far as I can tell the EU actually wants reciprocity from the US too:

Europe is asking for “reciprocity” from the United States in terms of welcoming European tourists, particularly with regard to quarantine, as part of the easing of restrictions linked to Covid-19, European Commissioner for the Internal Market Thierry Breton said Monday [June 7] on radio RTL.

“I insist that we want reciprocity, because for the moment we still have quarantine in the United States [for Europeans.]”

The EU-27 agreed on 19 May to allow entry into the EU for travellers from third countries who had received the necessary doses of the Covid-19 vaccines authorised at European level.

I'm guessing besides the fact that the EU has closer ties with the US than with China, there's also the fact that most of the US is vaccinated with the same vaccines that are approved in the EU, while China used their own. And their efficacy is more debatable; see Seychelles or Bahrain. Also China has been trying hard to sow doubt in Western vaccines etc. So that might explain why the EU is more up front on reciprocity angle with China... The "reciprocity" verbiage also reminds me of the more general line that EU "China hawks" have taken on other issues, like trade/investment ones.

First of all, lets take a look at the initial announcement made by the EU in regards to reopening borders. This happened on June 30th 2020, long before vaccines were available anywhere in the world. The criteria set out for reopening the border were:

Regarding the epidemiological situation, third countries listed should meet the following criteria, in particular:

Reciprocity should also be taken into account regularly and on a case-by-case basis.

Now lets take a look at the graph of cases in China vs the EU from January to June 2020, adjusted for population: 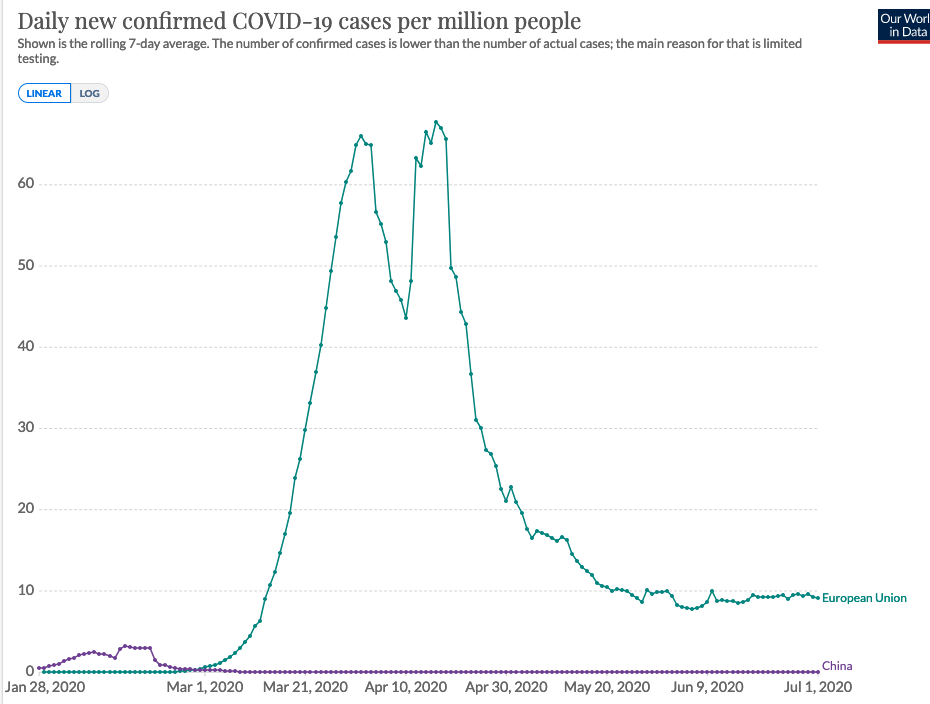 As you can see the number of cases in China has been completely flat after the initial outbreak in Wuhan. On July 1st 2020, the EU was reporting 4000 cases per day vs just 12 in China, on a 7-day average. If we presume that Chinese numbers were off by a factor of 100, this still means they were about 8x better than China when adjusted for population. So criteria #1 and #2 were clearly satisfied by China, epidemiologically they were (and still are) doing great. I could expand the graph to cover 2021 as well but the numbers would be even less in favor of the EU.

Then there's the third requirement, namely "reliability of the information". One could try to argue that Chinese numbers are highly inaccurate and cannot be trusted. But luckily there are around 600,000 foreigners living in China, including 70-100 thousand US citizens who are able to rely accurate information on what's happening on the ground. Looking at Youtube, we can find numerous reports of gyms reopening in China all the way back in April, showing that things were stabilizing there. Additionally, widespread infections would result in thousands of reports of foreigners falling sick with the virus in China, but those failed to materialized.

Finally, we can see that other supposedly "zero COVID" nations did not make the cut. Tanzania and Turkmenistan are not there for example, even though both claim to be virus free to this very day. But Rwanda was on the initial list despite being only of minor importance to EU trade, which shows that EU officials did their due diligence and only included countries which were indeed "COVID free" at the time.

This brings us to the last point on "reciprocity" which should be applied on a "case-by-case basis" in theory but in practice was only required from China ever since the list was established. Looking at press releases by EU officials we can see that its a common theme. For example, this statement was made in September 2020:

We made it clear where we stand. Where we agree, and where we disagree. Real differences exist and we won't paper over them. But we are ready to engage. Ready to cooperate where we can, and ready to roll up our sleeves to find concrete solutions. And on those difficult issues, we conveyed a clear and united European message: we want a relationship with China that is based on reciprocity, responsibility, and basic fairness.

After the 8th China-EU High-Level Trade and Economic Dialogue (HED), on Tuesday, EU Commissioner for Trade Phil Hogan said bilateral and trade relations “must be based on the key principles of reciprocity and level-playing field based on clear and predictable rules”.

And this statement was made in April 2019:

Negotiations have been difficult, but ultimately fruitful. We managed to agree a joint statement, which sets the direction for our partnership based on reciprocity. This was our common effort and it is our common success.

So the requirement of reciprocity seems to be merely a reflection of overall EU policy of the past few years. Namely that China-EU relationship should be as "quid pro quo" as possible, in all areas of cooperation. I'm sure EU leaders would love to get similar reciprocity from Japan, US or Israel, but "reciprocity" isn't a current sticking point for those partnerships.

Not the answer you're looking for? Browse other questions tagged european-union china covid-19 .

-8
Why are countries still introducing COVID-19 quarantines for travelers from affected regions, even though it's been proven they don't work?

15
Why does China maintain the One Country, Two Systems principle?
3
Why is China the only country that build infrastructure for natural resources rights?
5
Why would China restrict the imports of plastics for recycling?
12
Why does Mainland China and Taiwan require Visas for each other's citizens?
0
Is there an official assessment of the side-effects of a quarantine for COVID-19 in US or in China?
4
Will the COVID vaccines from China be unavailable in the US for political reasons?