NEW YORK — Polls have closed in New York City’s first ever ranked-choice election and, while the die has been cast, voters may not know the outcome for weeks.

[...] Further extending the ballot count is the advent of ranked-choice voting, which allows New Yorkers to select up to five candidates for each position. The system kicks in when no candidate attains 50 percent of votes on the first pass. The board plans to issue preliminary results of ranked ballots on June 29.

More than a dozen Democrats and two Republicans will vie to replace outgoing Mayor Bill de Blasio (D). The ranked-choice election is expected to take weeks to resolve.

Question: Algorithmically it can be done via several passes of a sorting function over all ranked-choice votes in a table in memory or on a hard drive, but how do they implement this with the various physical forms of votes cast in New York's mayoral election?

Will they resort to all electronic implementation of the algorithm, all physical, or some hybrid method?

In Python, assuming (for example) exactly 14 candidates available (in math it's number of permutations without repetitions)

How ranked choice voting ballots can be counted by hand

I think the counting can be done by hand (using several 'passes' if necessary). For example, in Canada, according to CBC.ca (on ranked voting in Canada):

"They're really simple. They're as easy as one, two three. You rank your choices in order — so who do I want to be mayor, who's my first choice, who's my second choice, and who's my third choice.

In the first round, we just add up the first choices, and if anyone has a majority, it's over. They win. But if nobody has a majority — let's say the person with the most votes only has 30 per cent — then obviously they shouldn't be the mayor necessarily.

So you eliminate the candidate with the fewest votes, and you just transfer those ballots to the second choice on each ballot until somebody has a majority.

Counting this by hand doesn't seem so difficult, you wouldn't need to account for all the possible ballot combinations in the counting process.

This is also how NPR describes the counting process for the New York City mayoral election:

In New York's election though, the votes will be counted by machine. As CBS News reported on May 25th 2021:

New Yorkers can expect to find out who won the city's upcoming Democratic mayoral primary more quickly than they would have if the New York State Board of Elections hadn't acted Tuesday to approve software for tabulating ranked-choice voting results. The decision means the city will now avoid a lengthy hand count of the ballots cast in the race next month.

Despite the software approval, it'll still be days, if not weeks, before New Yorkers know who won the June 22 primary. Unofficial results of the first-choice votes are expected to be released on primary night to show first-choice votes, but the city Board of Elections says that officials won't be able to start calculating results until at least the following week.

As for the specific implementation, that's already been covered in-depth by Zach Lipton's answer.

New York City did tabulate some ranked choice ballots by hand in special elections earlier this year, where the number of ballots and candidates was comparatively small and hand counting was more feasible.

However, for the Mayoral election, the state Board of Elections certified software for the counting process: The RCV Universal Tabulator, an open source package produced by a non-profit group called The Ranked Choice Resource Center.

The software is open source and can be viewed on GitHub. I imagine the physical ballots will be scanned using typical certified voting tabulation equipment to produce the input for the RCV software. If you're able to read Java, the core tabulation loop looks pretty straightforward (the software supports multiple winners, though that's clearly not being used in this election):

They'll eventually release the full cast vote record as well, which will allow anyone to perform their own version of the algorithm if they wish.

The process is described here: https://vote.nyc/page/ranked-choice-voting

I'd add also, that (a) they're not going to start the process until next week and (2) some of the early round reallocations will go really fast since there are very small numbers for the most minor candidates. 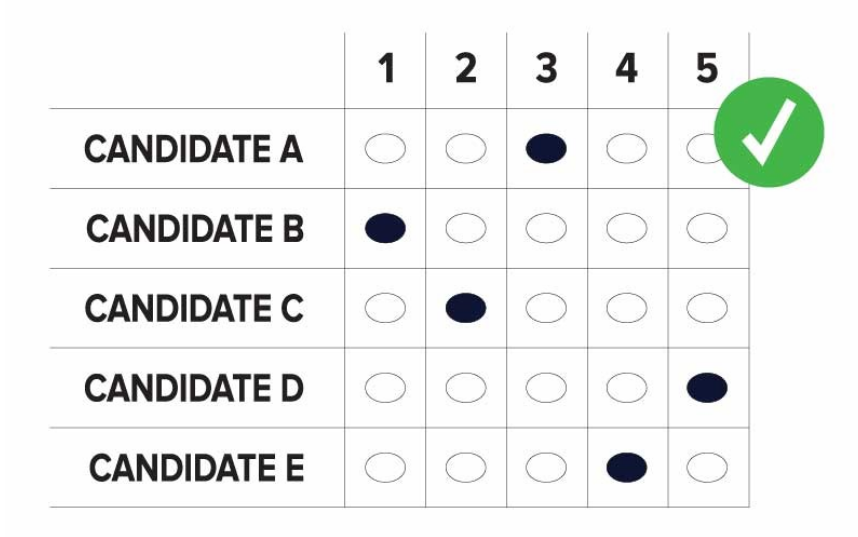 Computationally, NYC has a more fail-safe version of this (relatively) simple Python script

When I ran it on my old, low end notebook I got the following output

Even in this simulation it is apparent that the real problem is preparing the data in a format that is suitable for counting, then it's a matter of seconds…

As a foot note, initially I thought I had to optimize the script using vector math libraries but it turned out it is not necessary.

14
Who is the Condorcet winner of NYC's 2021 mayoral Democratic primary?
2
If the US congress extended the Section 5 preclearance requirement in the Voting Rights act another 25 years in 2006, why might it not apply in 2020?

15
Why are there so few polling sites in New York?
11
New York's ranked choice voting, dealing with "a tie at the bottom"