How is Russia responding to non-military maritime traffic in the legally recognized shipping lane passing within its territorial waters?

From the video BBC journalist reports from British warship as Russia “fires warning shots” - BBC News here are some screenshots and transcribed audio (mine but based on BBC's closed captions).

Beale: (Narrating) HMS defender is going to sail within what Russia now claims is its territorial waters but following a legally recognized shipping lane.

(Question to Dorrington:) Would you say there's a flashpoint here in terms of how the Russians will behave?

Dorrington: There's a contentious point. Their posture will likely be more belligerent because of our proximity to what they recognize as (pause) their waters.

This apparently cautiously choreographed (by both sides) event might be somewhat staged for appearances. But I'd like to ask about how things are going on days when there are no non-Russian military ships nearby this area (within 12 nautical miles of the Crimean Peninsula (area with Cape Fiolent and Sebastopol labeled).

Question: How is Russia responding to non-military maritime traffic in the legally recognized shipping lane passing within its territorial waters off the Crimean Peninsula? Is there commercial traffic passing with (or without) permission through the 12 nautical mile limit, or is it generally staying outside to avoid confrontation? If there is regular commercial traffic within it, is Russia allowing it to pass, giving permission on a case-by-case basis, or discouraging it? 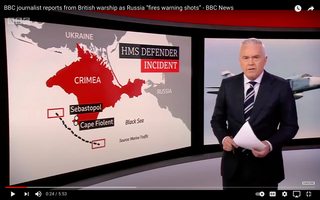 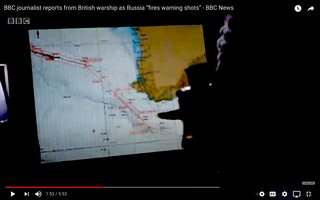 left: Screenshot from the linked video. right: Ditto but with contrast boosted a bit. click images for full size

I've found a source that seems to address this. Though I'd prefer something more definitive, substantial and in depth, I'll post this for now as a partial answer to my own question, in hopes that a better answer eventually supersedes it.

CBS News' U.S. warship leads drills in Russia's backyard, a message that the Black Sea is "for everybody" says:

Russia has refused to allow foreign ships to pass through what it considers its territorial waters off the Crimean Peninsula — territory that Moscow unilaterally annexed away from Ukraine in 2014. Russia has threatened to bomb any vessels that enter the area.

Russia has threatened to bomb foreign warships that sail into those waters in the future.

The training exercise that the USS Ross is participating in is several miles away from that patch of the Black Sea, and the American warship is heavily armed with Tomahawk and Harpoon missiles, and torpedoes.

Thus it is still less than certain (to me at least) if passage by all foreign ships or only military ships is refused, as well as what exactly "foreign ship" means (registry, ownership, etc.)

foreign ships (military and civilian) are allowed innocent passage through it

So, sometimes on vesselfinder.com, you may notice foreign ships in Crimean waters, like that one, from Moldova: 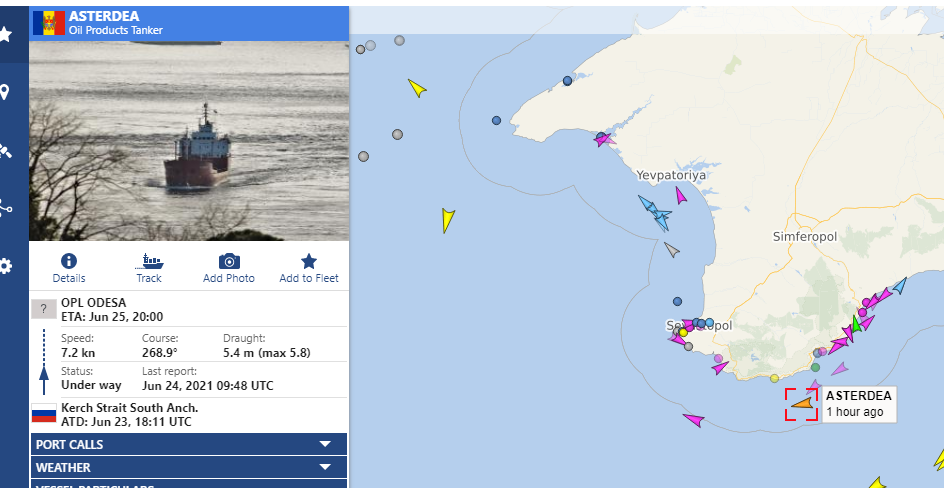 Many countries treat that waters as contested, so there are not many such ships. But some are still present.

And about the incident, somehow mentioned in the question:

UK interpretation: HMS Defender is sailing in "international" waters and was not warned by Russian ships. No planes, no warning shots, nothing:

"We believe the Russians were undertaking a gunnery exercise in the Black Sea and provided the maritime community with prior warning of their activity.
"No shots were directed at HMS Defender and we do not recognise the claim that bombs were dropped in her path."

Russia responds to it as break into its territorial waters[*], as an act of propaganda aimed at affecting the defence, or security of the coastal State.

Also, it should be noted, that there was a BBC correspondent on the British ship, treating it as a more contested provocation. Also, a witness of this correspondent highlights an open lie of the UK officials, which were denying that incident.

The exact timing was:

After the incident, the British attache and British ambassador were given strong demarche.

If that doesn’t work, we can bomb not only the path but also the target, if our colleagues don’t understand.

*in fact, those waters are contested areas, as long as western countries do not accept Crimea as a Russian region.

Not the answer you're looking for? Browse other questions tagged russian-federation military crimea territorial-dispute maritime-law .

4
Are there any other "Nine-dash lines" out there?
-3
Are late-night network talk show hosts and comedy shows mostly if not uniformly strongly anti-Trump and generally anti-Republican Party these days?