"Shut out" districts in 2021's NYC Republican mayoral primary -- how did they vote in the Democratic primary and 2020 presidential race combined?

Looking at the 2021 mayoral election, I have seen more shut-out precincts in the NYC mayoral primary than in other elections in this city. I understand there are caveats to talking about the shut out precincts in a primary for electing/nominating a candidate that has no realistic chance of winning, but the NYC Democratic mayoral primary likely has in the neighborhood of 950 thousand votes.

I am curious about how these shut-out precincts behaved in the 2021 Democratic primary (total votes cast), and the 2020 presidential election (excluding 3rd party votes). I will add the additional requirement that a shut-out area needs to have more than 50 votes in the Democratic primary, because of the small numbers fallacy starts to become an issue at numbers that are smaller than that. More than 50 votes effectively implies less than 2% of the votes would go to the Republicans if there were an arbitrary number of votes cast in a given hypothetical area. Most areas of NYC did not hit this mark in 2020 though many did in 2016.

If possible, I want more detailed statistical data on the vote share in the 2020 race and primary votes cast.

According to the election-night results from the New York Board of Elections, of the 5,901 districts that voted in 2021's Republican mayoral primaries, there were 1,311 'shut-out' districts in which no votes were cast. 805 of these cast fifty votes or more in the corresponding Democratic primary. 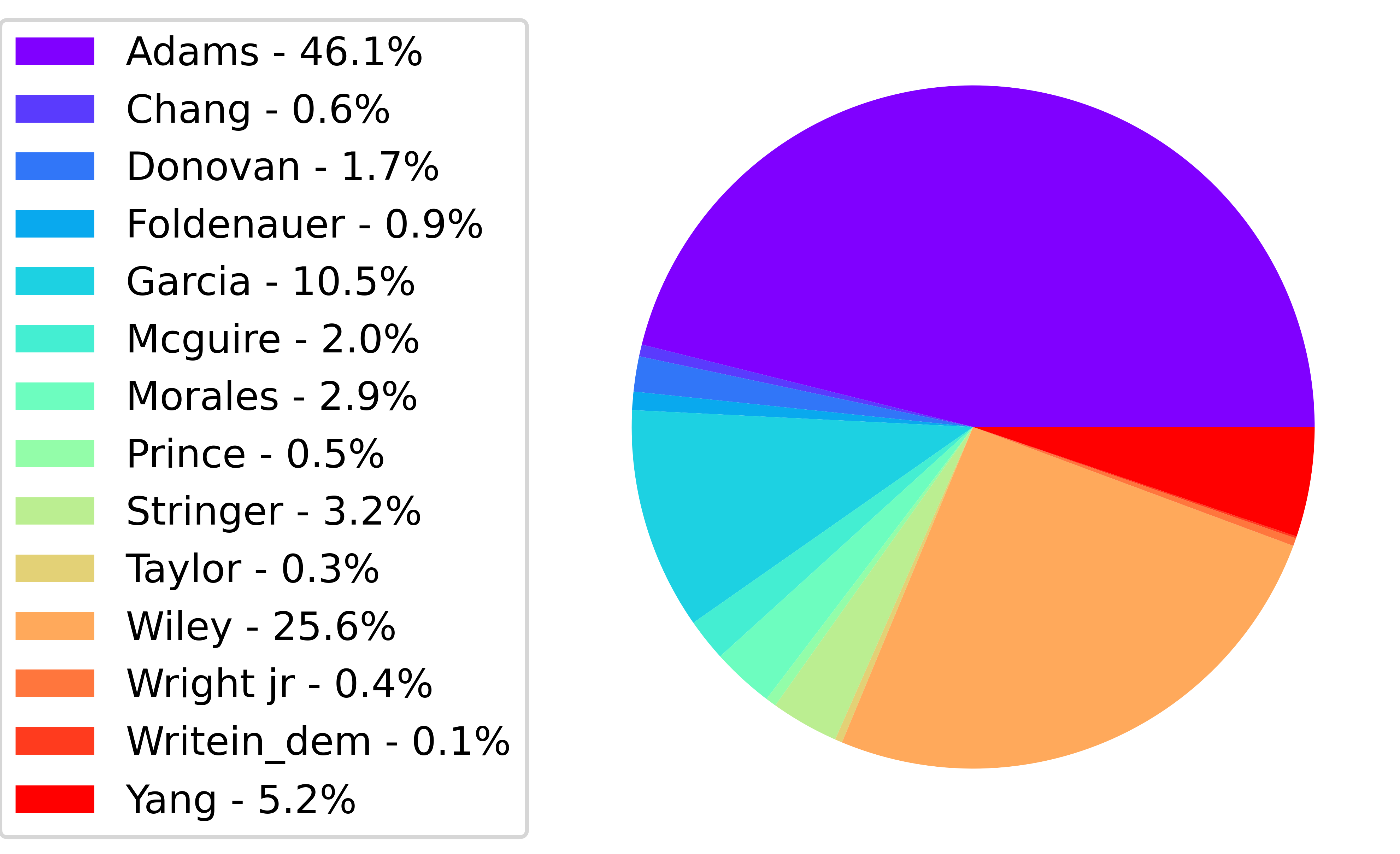 604 districts were won by Eric Adams, 161 by Maya Wiley, 37 by Kathryn Garcia, and 3 by Andrew Yang. These are shown below, using election district shapefiles from nyc.gov. 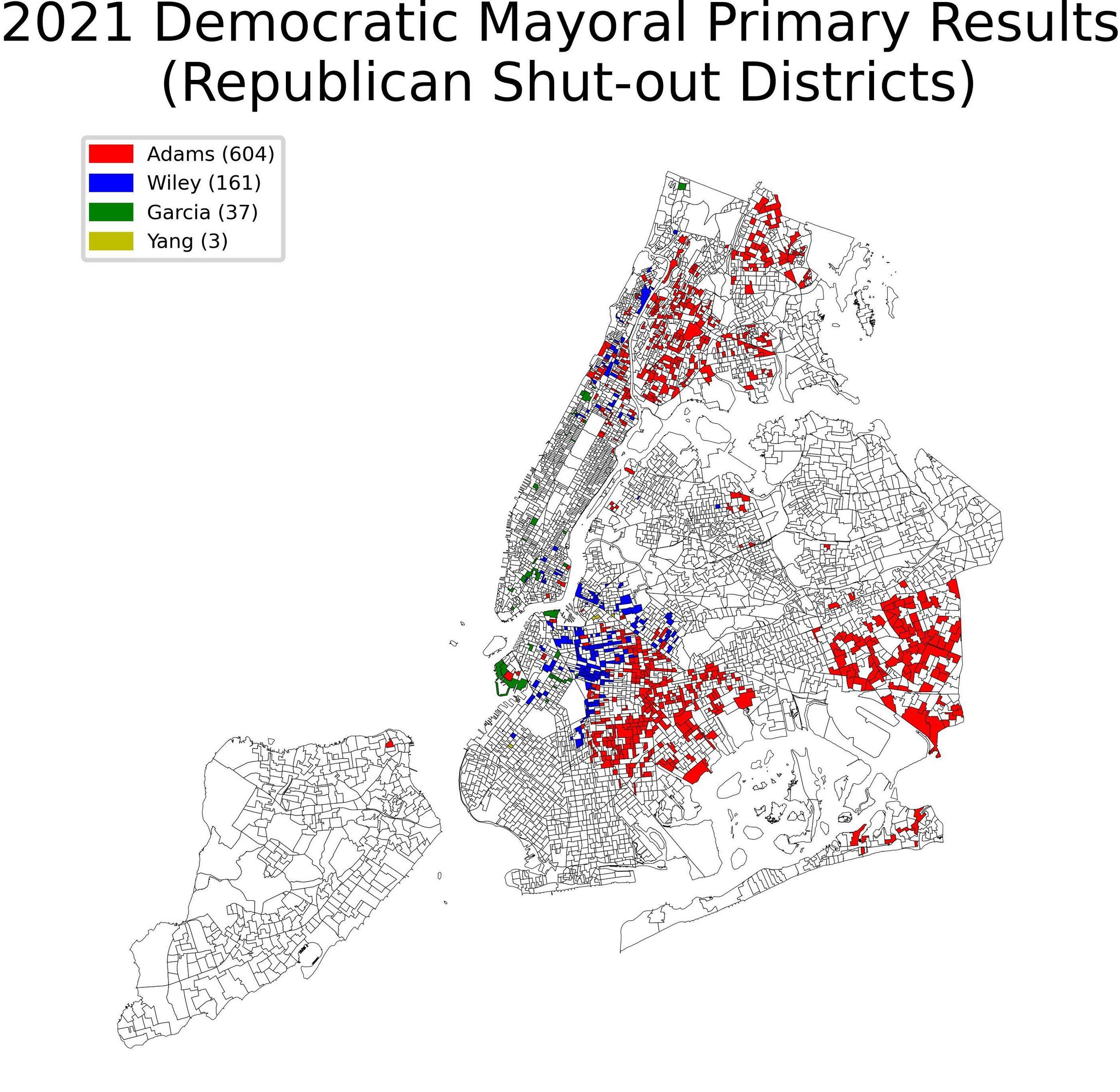 We can also examine these 805 districts in the 2020 presidential election using data from vote.nyc. 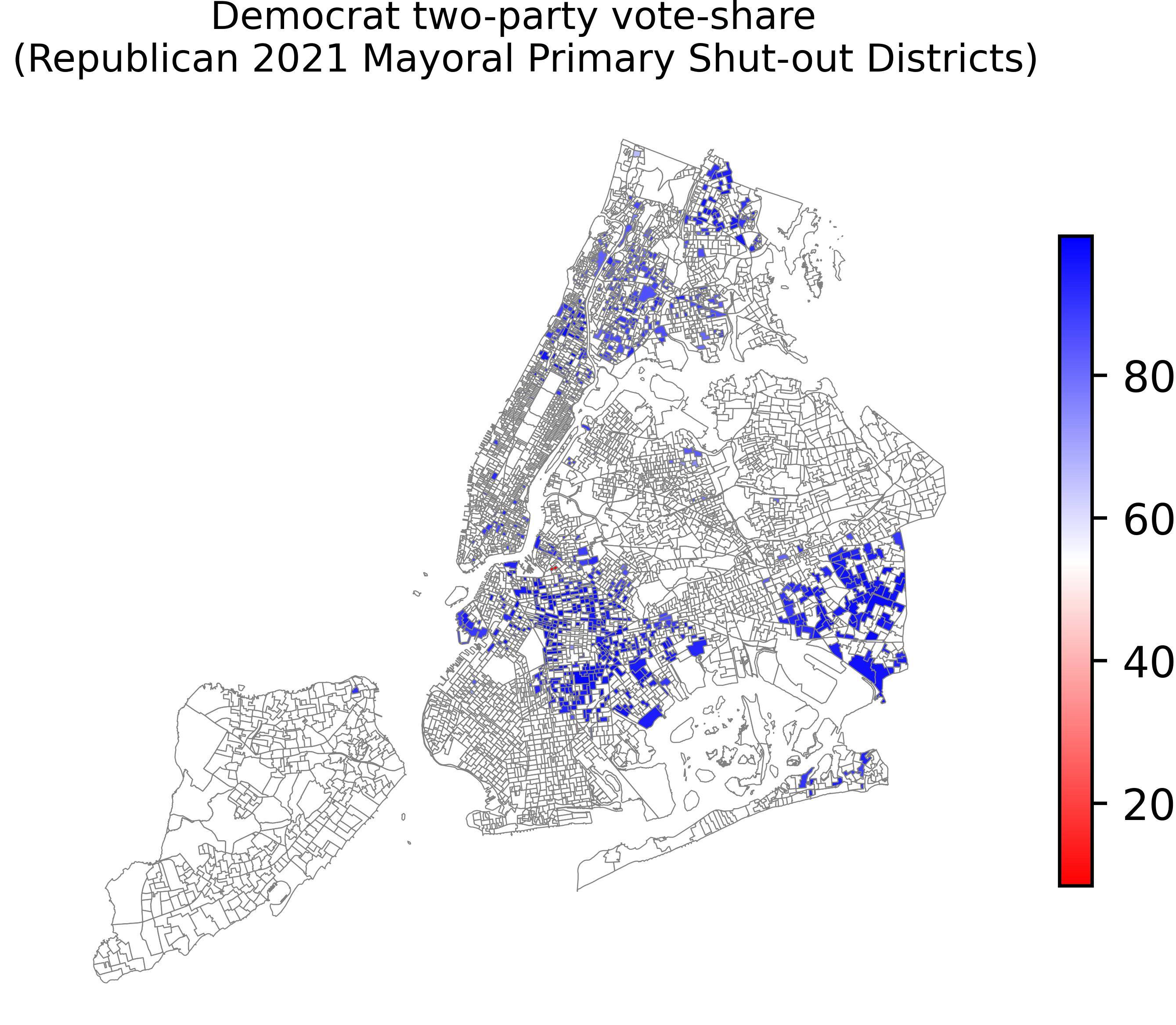 The code and scraped/sanitised data used in this answer can be found on GitHub should you feel like computing more stats yourself.

Not the answer you're looking for? Browse other questions tagged united-states voting statistics demographics new-york-city .

5
Is Donald Trump the main reason behind the dramatic increase in Republican primary turnout?
1
How many congressional districts produced a split result in the 2020 House and Presidential elections?
8
Why is winning the NYC Democratic mayoral primary currently widely seen as tantamount to election?
3
Shut-out precincts for Republican governor in 2021 New Jersey primary?
15
How will New York City physically implement the ranked choice voting algorithm with thousands of unique mayoral votings possible?
13
Who is the Condorcet winner of NYC's 2021 mayoral Democratic primary?
4
Why are Democrats more geographically clustered?
3
What is the correlation between swing and change in votes cast from the 2016 to 2020 US presidential elections among major parties?