What was George W. Bush's plan about nation-building in Afghanistan?

The USA did not go to Afghanistan for nation-building

As far as I recall, George W. Bush said something about nation-building when he was in office for his 1st term as a president.

What was George W. Bush's view about nation-building in Afghanistan when the USA first entered Afghanistan?

Writing partially from memory reading War and Decision: Inside the Pentagon at the Dawn of the War on Terrorism. Note that this answer is more geared towards early Bush policy, as per the question:

It is also useful to remember, that unlike the much larger US and NATO forces later stationed in Afghanistan, or indeed the Iraq invasion in 2003, the initial overthrow of the Taliban was done on the cheap, with a thousand or so Special Forces/CIA collaborating with Afghan anti-Taliban forces and directing airstrikes. There just wasn't much to be building with, at the start.

Eventually, however, officials interviewed for the Lessons Learned project said, the Bush administration recognized it had a duty to help Afghanistan build a new economy from scratch. Although Afghanistan had scant experience with free markets, the United States pressured the Afghans to adopt American-style capitalism.

Now, this is WP stating this and I wasn't following Afghanistan all that closely at the time. However, this disastrous playbook is exactly the one that the US pursued in late 2003 in Iraq, under Bremer. Feith BTW makes Bremer a scapegoat for everything that went wrong in Iraq despite him being put in place after sidelining the State Department at Defence Department insistence.

Later on, claims that aid money was being diverted into Taliban coffers, as "protection money" became more common and credible and the nation-building opportunity had probably passed by later years, if it ever existed.

It is also been said that, unlike other Western powers, the USA had little institutional experience of administrating remote, poorer, cultures (i.e. colonialism) and was easily taken in by "sympathetic" locals with a gift for manipulating them. In Afghanistan that was Karzai, in Iraq that was, almost, Chalabi.

April 17, 2002 Reconstructing Afghanistan President George W. Bush calls for the reconstruction of Afghanistan in a speech at the Virginia Military Institute. “By helping to build an Afghanistan that is free from this evil and is a better place in which to live, we are working in the best traditions of George Marshall,” he says, evoking the post-World War II Marshall Plan that revived Western Europe. But the United States and the international community do not come close to Marshall Plan-like reconstruction spending for Afghanistan. The U.S. Congress appropriates over $38 billion in humanitarian and reconstruction assistance to Afghanistan from 2001 to 2009.

November 2002 Establishing a Reconstruction Model The U.S. military creates a civil affairs framework to coordinate redevelopment with UN and nongovernmental organizations and to expand the authority of the Kabul government. These so-called provincial reconstruction teams, or PRTs, are stood up first in Gardez in November, followed by Bamiyan, Kunduz, Mazar-e-Sharif, Kandahar, and Herat. Command for individual PRTs is eventually handed over to NATO states. While credited with improving security for aid agencies, the model is not universally praised. Concern mounts that the PRT system lacks central controlling authority, is disorganized, and creates what a U.S. Institute of Peace report calls “an ad hoc approach” to security and development. Such criticism grows beyond the PRT program and becomes a common theme in the NATO war effort, as a maze of ìnational caveatsî restricts the activities of member forces. Critics contend this limits the coalition’s effectiveness.

Let's see the actual spending, as reported by Office of the Special Inspector General for Afghanistan Reconstruction (SIGAR). (Note: SIGAR was created only in 2008).

(Blue is defense spending, gray is reconstruction. Note the low early year numbers. Note: I assumed that military-led projects, common for US forces, fell under the blue umbrella, but apparently not as DoD also gets itemized under Reconstruction, 76.6B$). 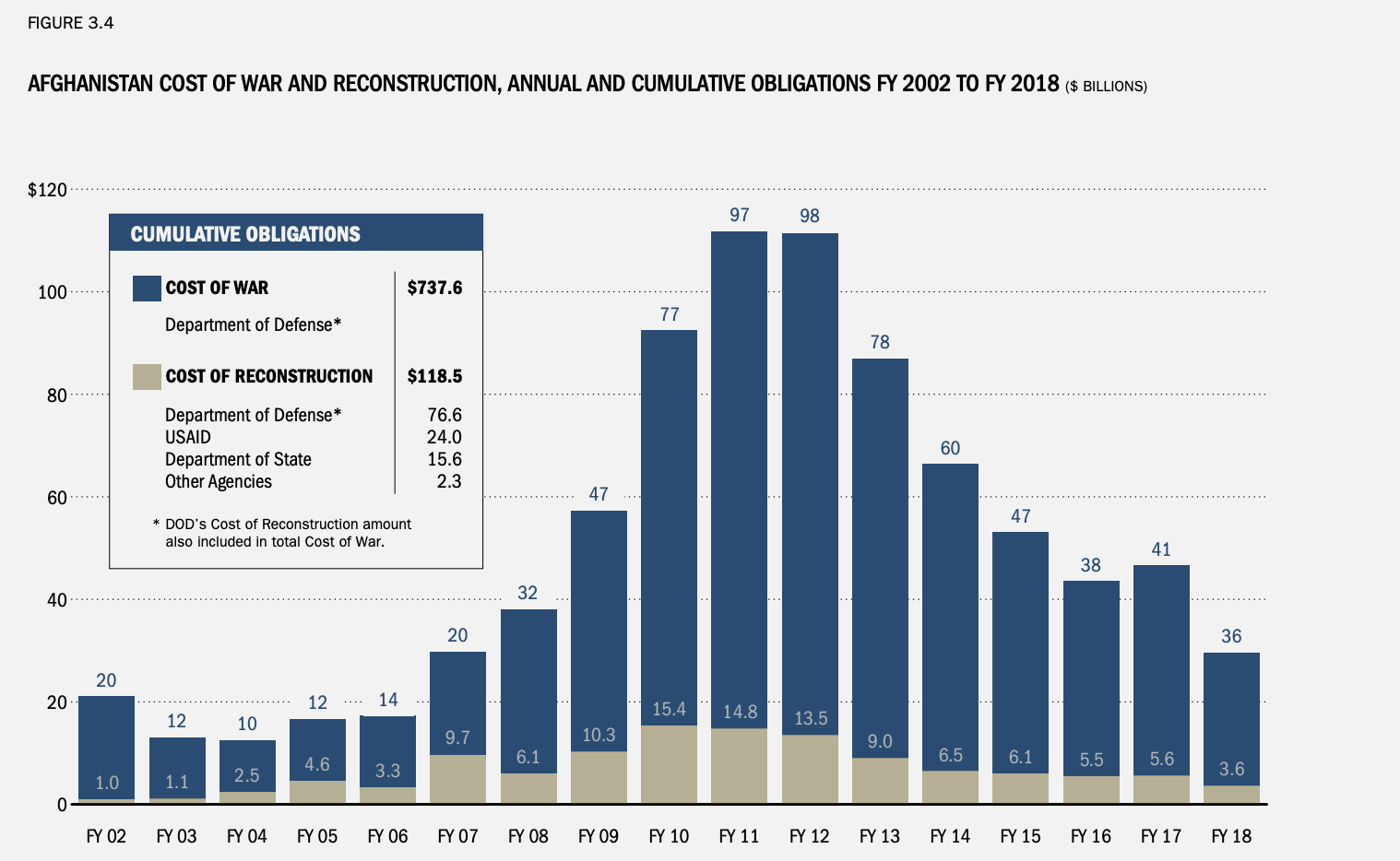 Last, indirectly related, in Obama's Wars Woodward says that Biden had the role of doubter in the Obama-Pentagon tussle about how many soldiers to send to Afghanistan, preferring to minimize US presence as well.

Oddly the long & accepted answer doesn't touch this one. RFERL has some actual/direct quotes from Bush's (April 2002) speech that was only commented upon in NYT:

He linked this effort to Marshall: "[Secretary of State] Marshall knew our military victory against enemies in World War II had to be followed by a moral victory that resulted in better lives for individual human beings."

This was followed in the RFERL piece by some critical commentary (from think tanks) that the money pledged (that year) seemed rather insufficient for this purpose in Afghanistan.

Bush then made similar comments regarding "rebuilding Iraq" in 2003. Commentators remarked how these speeches departed from what he had said on the matter of "nation-building" as a presidential candidate in 2000.

As for the [much] broader title question, there's an open access book chapter that deals with the matter of Bush era nation-building. It does have some interesting titbits, for example (p. 93), on October 12, 2001, in an internal discussion Bush expressed his view that that a post-Taliban administration should be turned over to the UN. This indeed is closer to his pre-election position that US troops should not be involved in "nation-building". Actually, this UN-focused plan did play out as such for a while, as UNSC Resolution 1378, passed in Nov 2001, indeed mirrored this early US position on UN having a "central role" in a transitional administration and even called for UN peacekeepers to be deployed. Then UNSC Resolution 1401 established UNAMA.

But then a "passing the buck" game began, especially regarding security, which was seen as a precondition for more ambitions "nation-building" goals. Neither the UN nor the NATO-led ISAF wanted to be responsible for securing Afghanistan. ISAF was only officially in charge of Kabul. There were also much fewer foreign troops in Afghanistan at this stage (around 15,000) compared to what had been sent to Bosnia or Kosovo in similar circumstances (60,000, resp. 50,000).

Nonetheless, sources of funding were basically divided between various countries in "spheres". US assumed rebuilding the Afghan military, Germany the police, Italy the court system, UK - counternarcotics, and [ahem] the World bank was put "in charge" of the economy. But there was a lack of integrating/coordinating international institutions to coordinate these "spheres". The World Bank quickly drew up a plan, asking for $10.2B over five years for reconstruction. That was basically the initial plan.

But the US Congress (and the US administration) became impatient with the international arrangements and passed the Afghanistan Freedom Support Act of 2002 at the end of that year. This was followed by the USAID drawing up concrete plans in early 2003. And the Pentagon (for the first time) accepting that it had to play a supportive role in achieving these. The DoD then created three provincial reconstruction teams (PRTs), but they were quite understaffed (~100 personnel each). According to the authors of this book, the slow pace of commitment to reconstruction outside Kabul allowed the Taliban to make a comeback in an essentially ungoverned land (initially in the South and East). That seems to jibe with a 2003 UN report which said similar things that reconstruction could not proceed without better security.

Basically, both troop and financial commitments to Afghanistan, at least in this initial period were quite below what had happened in other countries, even in Africa:

As pointed out by the humanitarian organization CARE International, in Rwanda, East Timor, Kosovo, and Bosnia, donors spent an average of $250 per person annually in aid. If that average were applied in Afghanistan, the country would receive $5.5 billion in aid every year for the next four years. Instead, it has received pledges amounting to less than one-fourth of that sum. The Henry L. Stimson Center, a Washington, D.C.-based think-tank, has pointed out that in Kosovo the international community spent twenty-five times more money, on a per capita basis, than it has pledged in Afghanistan. Similarly, in Kosovo the international community committed fifty times more troops per capita than it has in Afghanistan. Comparisons with Iraq, of course, are even worse: while Iraq received U.S.$26 billion in reconstruction aid in 2003, Afghanistan received less than $1 billion.

There are very few talks out there about the "nation-building" in Afganistan, but the news released by the White House in 2008 offers a piece of clue that the "rebuilding" has started during George W. Bush's term, as early as2003. Here it says:

"On September 26, 2008, President Bush and Afghan President Hamid Karzai received an update from two Afghan governors and from U.S. Provincial Reconstruction Team (PRT) and Agribusiness Development Team (ADT) leaders on the important work being done to improve economic and security gains in Afghanistan. The Provincial Governors and PRT leaders from Nangarhar and Kunar provinces in eastern Afghanistan briefed President Bush and President Karzai on the changes they are seeing firsthand on the ground. PRT leaders emphasized that strong partnerships between Afghans and the Americans at the local level have led to greater community participation in reconstruction and development efforts, more jobs, and better security.

Not the answer you're looking for? Browse other questions tagged united-states afghanistan george-w-bush .

4
What exactly happened during Reagan's invocation of the 25th Amendment?
9
Criticism of Trump's drawdown of forces in Afghanistan, what would be the alternatives?
1
What percentage of Obama and Bush's speeches were aired?
8
Have there been any personal attacks on Sondland after his change in testimony on the quid-pro-quo?
33
Why did the USA stay in Afghanistan for 20 years?
8
Has President Joe Biden made any public statements on wanting to run for a second term?