Are US Representatives from wealthy districts more likely to "graduate" to the Senate than Reps from poorer districts?

I'm asking this because I suspect that there's an effect where wealthy district -> better fundraising for the representative -> more likely to win U.S. Senate primaries and general elections. Does such an effect exist?

This is a difficult question to answer because there's not easily accessible data on representatives who attempted to become senators but failed. So what I did was test whether the median income for the former districts of senators who used to be representatives [1,2] (n=47) in the current Congress was higher than the average median income for the other districts [3,4]. 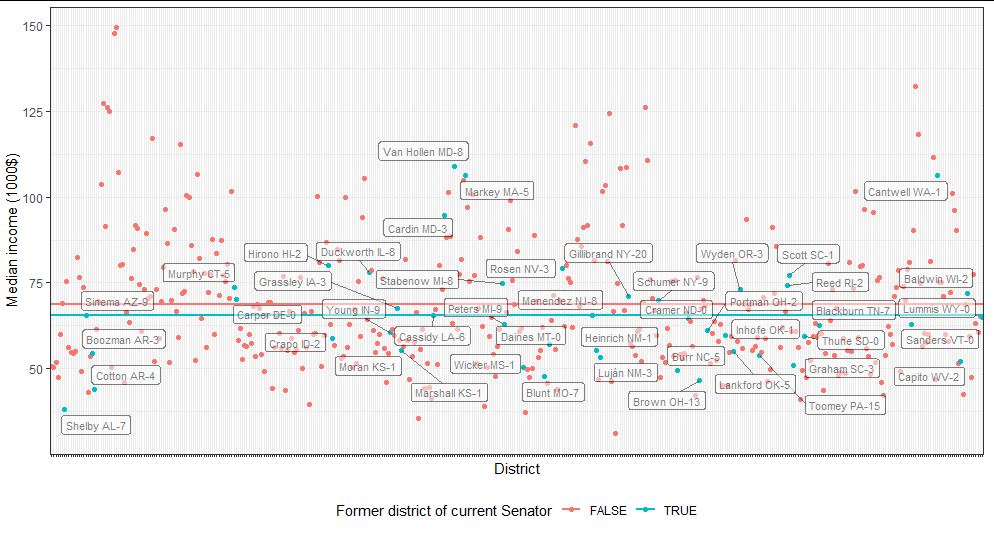 To counter your intuition, an expensive House race costs about $2 million, whereas a Senate race is closer to $10 million. Maybe a candidate from a wealthier district has $1.5 million more in their campaign chest than one from a poor one. But that's not all that much compared to the $10 million they now need to raise.

Another thing is that not all of your money needs to be raised from your district. You may get cash from a corporation with lots of factories in your state, Emily's List, and so on. Wealth in your district doesn't directly correlate with campaign funds previously raised.

Finally, if you're in the House and running for the Senate then you start state-wide fund-raising far ahead of time. You have a slight edge if you have a good relationship with wealthy home-district donors. But no matter who you are you're mostly asking people in districts you've never represented, and asking statewide organizations (which any Representative, rich or poor district, has an equal shot at impressing). Putting that another way, suppose you're a Democrat from a wealthy city running for the Senate. A Republican House member from a poor district can fund-raise from conservative millionaires in your district. They'll probably give more since they hate you extra.

Not the answer you're looking for? Browse other questions tagged united-states election senate house-of-representatives .

9
Why is the Republican majority greater in the US House of Reps than in the Senate?
8
How often do the US Senate and House of Representatives contradict each other?
7
Why is the Senate so much more prominent than the House of Representatives?
16
In 2016, why did the GOP win the House popular vote while Clinton won the popular vote?
5
Would switching to a proportionate House require a constitutional amendment?
8
Does a Senate trial have more authority to call witnesses than a House impeachment hearing?
3
Are Republican voters more likely to vote a split ticket than Democratic voters?
3
Representatives of districts that are 50 to 65 percent Hispanic by party?
1
In which congressional districts were there more votes for the Democratic candidate in 2018 than in 2016?
4
Why are Democrats more likely to vote by mail than Republicans?