Is there any international reaction on police violence in France?

On those holidays another round of anti-Covid protests took place in France: 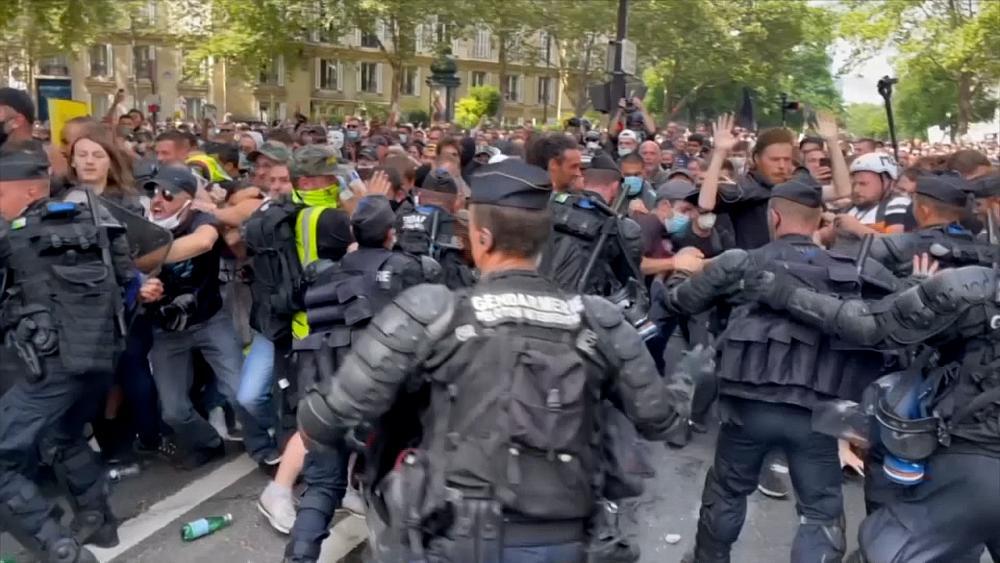 Protests were suppressed rudely, with police violence and water cannons.

Is there any reaction from international community human rights organizations? Or, at least, start of a dialog with protesters?

German news quote French news saying that the protesters started the violence, and that a majority in France is for Corona protection measures. The German section of Amnesty International talks about a need for global vaccination and social distancing.

Might be useful to look at the context of this "rude behavior" by the cops.

About 200 people, who had participated a little earlier in the demonstrations against the health pass and compulsory vaccination for certain professions, left the authorized processions to head for the Champs-Élysées around 5 p.m.

The police, CRS and police quickly intervened to try to block access to the avenue des Champs-Élysées, visibly taken over. Dozens of demonstrators began to descend the avenue des Champs-Élysées towards the Place de la Concorde, shouting for “liberty, liberty!”, Before singing a Marseillaise, while lines of CRS were deployed without however cutting off traffic on sidewalks. Visibly overwhelmed motorcycle brigades and mobile units of CRS came and went to try to block the eastern and western accesses of the avenue to the demonstrators who then deployed in scattered groups.

At around 6 p.m., the situation became more tense when demonstrators erected barricades and threw projectiles at the police, who retaliated with tear gas canisters and water cannons, as tourists walked along the avenue. .

Does that answer your question? The protests were authorized and were expected to follow a certain route which a small minority (200 out of 11000) was not happy with, just as they were not happy being peaceful. So what's missing, dialog-wise? Note that protests in France have an occasional tendency to become violent and trigger property damages, especially to cars. Expectation of property damage, which is mentioned later in the article:

Storekeepers then hastily tidied up their terraces, lowered their curtains and closed shop.

Not the answer you're looking for? Browse other questions tagged france police human-rights freedom-of-speech freedom-of-movement .

3
Does radical pacifism reject police violence?
8
What limitations to freedom of speech are there in France?
10
What can the UK government do to help resolve the persecution of the LGBT community in Chechnya?
2
Is there any evaluation of solidarity tax impact in France?
4
Are there any polls in France on further EU expansion in the Balkans?
1
Is there a list of human rights organizations monitoring the current use of force by police in the US?
2
Is there any significance to calling state police "troopers"?
7
How can I compare levels of police violence in different states of the world?