Is the current governance of the United States Capitol Police at odds with separation of powers doctrine?

The United States Capitol Police (USCP) appears to be a law enforcement agency and has been in the news since the capitol riot of January 6th, 2021. However, in recent events, the Capitol Police leadership has asserted that it is not a federal law enforcement agency to refused to honor freedom of information requests (FOIA) directed to it. For example, Ronald Gregory of the USCP's Inspector Generals Office has responded to press attempts to gather information saying:

“The Office of the Inspector General of the United States Capitol Police and the department itself, fall under the Legislative Branch of government and is not subject to the Freedom of Information Act."

The executive power shall be vested in a President of the United States.

When these words were written, "executive power" in the 13 Colonies seems to refer to the powers of provincial governors, which seem distinct from those powers delegated to the legislature or courts.

Q: Is there any historical basis for a national legislature to appoint its own police force and exclude it from the executive branch agencies' obligations?

Stated another way: Under the U.S. Constitution, which of the enumerated powers of Congress permits them to control or command an armed force of any sort? 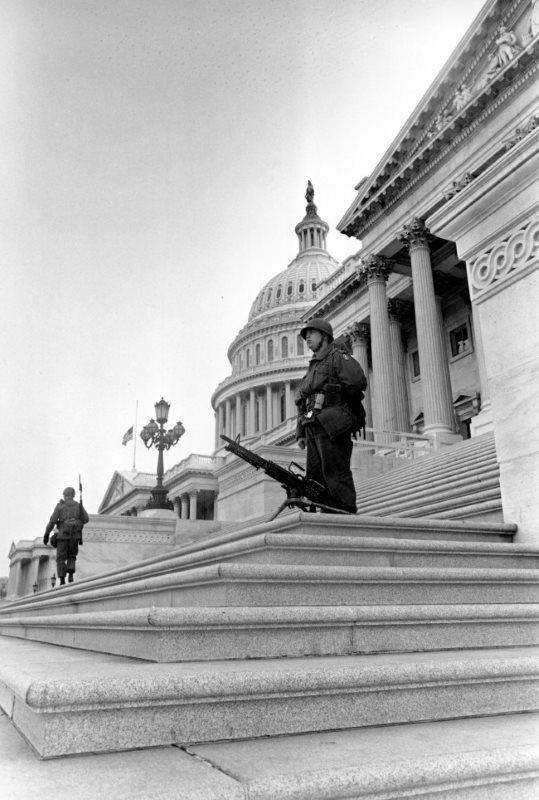 (Historical photo) The executive branch always has taken responsibility for the security of the Capitol. In my personal memory (1968), the National Guard was ordered by the president to install machine guns on the steps of the Capitol, and they (of course) complied with this as a legal order. On the other hand, in 2021 Nancy Pelosi wanted machine guns deployed again, and sought to have this done through the Capitol Police according to the acting DHS deputy secretary at the time. A determination was made that this was not a legal order, under separation of powers.

For reference, according to the USCP, it is governed by the Capitol Police Board, made up of:

None of these officials report to the executive branch. Furthermore, the official board members are not police force members. There have been claims by capitol police union members that delays generated by board members and senior officers left the rank and file vulnerable to mobs on January 6th.

P.S. It seems relevant to compare the USCP with the U.S. Marshalls Service, which provides (among other things) protection for Federal Courts and Judges. The Marshalls Service is a part of the Executive Branch, though they serve the Judicial Branch.

Indeed, following the English, and later UK Parliament, most state legislatures appoint a Sergeant-at-Arms, to keep order and provide for security for a deliberative body. Colony legislatures had appointed these prior to 1776, and almost the first act of the US congress was to appoint officers, including a Sergeant-at-Arms.

The office of Sergeant-at-Arms is a "Sergeant" (literally servant) of the legislative house and answers to the House, not a Provincial, Colony or State Governor.

The principle that "Each House may determine the Rules of its Proceedings" is another fundamental principle, that entails the right of each House to appoint officers (police, if you will) to enforce those rules. The complexity and close working of the House of Representatives and the Senate has practically led to the two Houses combining for their joint security. This state of affairs has existed for 200 years, and has not been found unconstitutional (though I'm not sure that anyone has ever tried to challenge it)

The Capital Police are not a federal agency in the sense of the FBI or DEA. They have no mandate to investigate or enforce law with respect to the general public; they are organized solely to protect and secure the United States Capitol Complex. As such, they are closer to a private security force than a proper police force, and fall under the rubric of 'in-house' administration.

The Freedom of Information Act gives access to most of the records of public agencies — exemptions exist — but it doesn't apply to every aspect of the US government. In particular, the FOIA explicitly excludes Congress, the Courts, and the central offices of the White House. The argument here is that the Capital Police are not a federal agency but are internally administered by Congress itself, which makes them immune to FOIA requests. So far as I know this has never been tested in court, so we'll have to wait for judicial rulings. However, it is worth noting that issues of police conduct are usually presented as either matters of internal policy and practice, or as issues of privacy for the officers involved. Even if it were ruled that the Capital Police are subject to FOIA requests, information of that sort may still be denied under the exemptions list.

Not the answer you're looking for? Browse other questions tagged united-states constitution separation-of-powers .

11
Can the POTUS neuter "advice and consent" by refusing to delegate?
6
Where does the US Constitution mandate and define a "State Legislature"?
39
Can the current President of the United States block the transfer of their office to the next elected president?
54
What does the POTUS do, exactly?
3
Are there countries where impeachment of a president without cause is authorized?
20
Is there any legal recourse to compel Oregon state senators that flee the state to return?
14
Did the FBI inform the US Capitol Police on the level of possible threat on Jan 6?
7
What are the limitations on the structure of a US state government?
27
Was Speaker Nancy Pelosi's rejection of Republican representatives Jordan and Banks "unprecedented"?