Do non partisan elections have lower turnouts in the United States?

In the United States, local elections in odd numbered years have lower turnouts. School boards in general have the lowest turnouts.

For example, there was a nonpartisan school board election in a highly populated Maryland county where only 3% of eligible voters voted.

I have seen similar effects for mayoral elections. Though the turnouts are low in general they tend to be even lower for ones without ballot listed political affiliations.

This seems related to the fact that they are non partisan elections, and therefore partisans feel that there is nobody/nothing for them to vote for or vote against. US presidential elections by comparison usually draw 55% turnouts and midterms 45% turnouts.

This effect has been fairly well researched, for example by Schaffner, Streb, & Wright in their 2001 paper Teams Without Uniforms: The Nonpartisan Ballot in State and Local Elections in Political Research Quarterly. They examine a number of US elections, including those in the city of Asheville, North Carolina as it switched from partisan to nonpartisan elections in the 1990s, and state legislative elections in Minnesota as they changed from nonpartisan to partisan in the 1990s; finding that "nonpartisanship depresses turnout and that in nonpartisan contests voters rely less on party and more on incumbency in their voting decisions".

Their hypothesis is that the presence of party identification on the ballot grants less informed voters a shortcut for making an educated vote; this, combined with the fact that candidate's positions are less likely to be widely publicized in elections with relatively low profiles compared to nation-wide elections, means that voters must invest more time and effort into determining differences between candidates in nonpartisan elections.

In order to investigate this, they look at areas in which both partisan and nonpartisan elections took place at the same time, but also looked at localities that switched from a partisan to a nonpartisan ballot.

On the other hand, Analysis 2 shows the turnout numbers for the mayoral election in Asheville, which switched from a partisan ballot to a nonpartisan ballot between the 1993 and 1995 elections. There is no significant drop in turnout - one explanation suggested by the authors is that the candidates running for mayor were familiar faces; one was the incumbent mayor while one was the vice-mayor, so the electorate was already fairly informed, and the effort needed to cast an informed vote was lower. 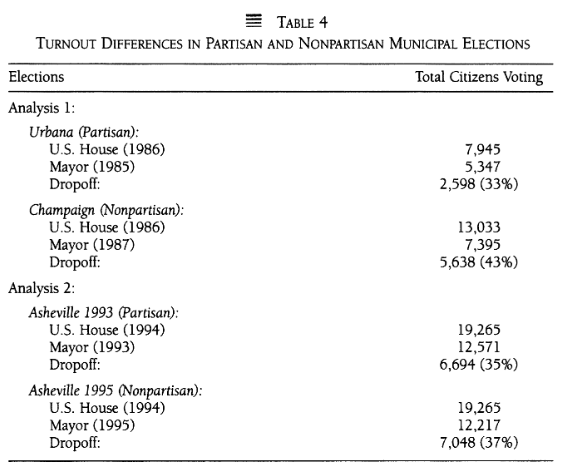 More convincingly, perhaps, the paper then looks at the difference in turnout between partisan and nonpartisan elections on the same ballot; the table below shows in Analysis 1 the difference between turnout in the elections for the House of Representatives and State Senate in Kansas, which used a partisan ballot for both races, and Nebraska, which used a nonpartisan ballot for the State Senate. Despite voters already having invested effort to turn up and vote, significantly fewer chose to cast a vote in the nonpartisan ballot. A similar effect was noted in Analysis 2, although not to quite the same extent. 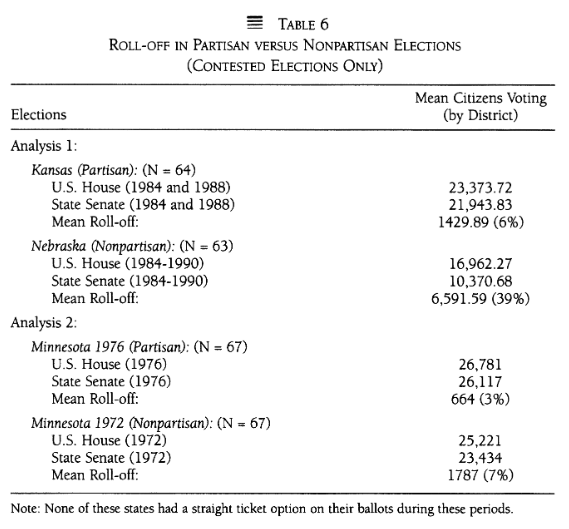 The analysis of mayoral and state Senate elections has produced strong confirmation for two hypotheses (and weaker support for a third) about nonpartisan elections: in some cases participation is pushed down and in all cases voting is affected less by partisanship and more by incumbency. Removing party from the ballot takes away or weakens partisan considerations from voters' decisions, both in situations where campaign activists do not reinsert partisanship and in those where the partisanship of the candidate is more obvious (such as in Minnesota). In addition, we find, consistent with the views of voters as cognitive misers, that without partisan cues voters rely on the next most obvious low cost voting cue - incumbency - which represents some combination of candidate name familiarity, less uncertainty about the candidate, and satisfactions with performance in office.

Not the answer you're looking for? Browse other questions tagged united-states election local-government voter-turnout .

5
Why are many US school boards elected?

17
Are there advantages to my being registered as an independent in the US?
77
Why don't poor people vote in the United States?
44
Why do Americans vote on coroners, magistrates, school directors, and tax collectors?
4
In recent US elections, is turnout among millennial voters lower than voters in the baby boomer generation?
2
How does turnout in US elections compare across states?
54
Is there evidence that the Republican Party leadership wants fewer people to vote?