Why hasn't Biden gotten a "rally round the flag" effect after Afghanistan?

One thing that surprised me about Biden's approval is the lack of a rally round the flag effect so far. It hovered around 50% on poll averaging sites which is where it was before. (In case you don't know what the “rally around the flag” effect is, the president's approval usually goes up after a crisis.)

Why has Biden's approval been dropping lately? This runs contrary to what happens to presidential approval when a war time event or social unrest happens, which tends to increase the president's approval. Trump, who arguably handled COVID poorly received a rally round the flag effect, albeit a minimal one. This seems to be the opposite of what happened under Trump, where a plurality approves, but the approval is significantly lower than earlier.

There are two likely reasons:

While this fits into the general definition of "periods of international crisis or war" during which this effect can be expected, if you look at some notable historical examples - Cuban Missile Crisis, Bay of Pigs, Iran Hostage Crisis, 9/11, Operation Desert Storm - these are all either something that directly affects US citizens, or the US leading military aggression. Leaving Afghanistan does not fit in here, even if the Taliban sweeping back has caused an international crisis of sorts. While most comparisons between the Afghanistan withdrawal and the Vietnam withdrawal I would deem facile, this is one where it would be nice to have that comparison - unfortunately Watergate was happening around the same time of the Vietnam withdrawal which makes approval-rating comparisons impossible. And as others have pointed out, Ford did not see a significant bump wrt the final acts of withdrawal.

Opinions about sitting presidents are largely baked in now. 538 has done a few pieces on the topic (link) (link). Biden did not really experience a "Honeymoon Effect" - another approval-rating phenomena - either, and while a bump could still be expected in a rally around the flag event, it would not be as pronounced as historical examples.

Biden voted for the war in 2001, and was Vice President for 8 years of it. It's possible people don't see the fall of Afghanistan as a disaster that happened to him, but because of him.

Compare the fall of Afghanistan with 9/11. Bush had been president for just 9 months. He had never had any foreign policy experience before he became president, and he had no influence on any of the decisions that led to 9/11.

Biden, however, voted for the war in Afghanistan in 2001, he was vice president for 8 years of the war, and he changed the withdrawal plans that had been drawn up by Trump's administration. It seems like this is a disaster of his own making, much more than Bush and 9/11. It doesn't help that he specifically said we wouldn't see helicopters taking people off rooftops like Saigon, and just days later we saw exactly that.

Ford didn't get much either after Saigon '75. He actually lost an election 18 months later. There was a minor uptick in the summer of 1975 in his approval rating (Saigon fell April 30), but that barely put him over 50%, as his approval was below 40% in that spring. 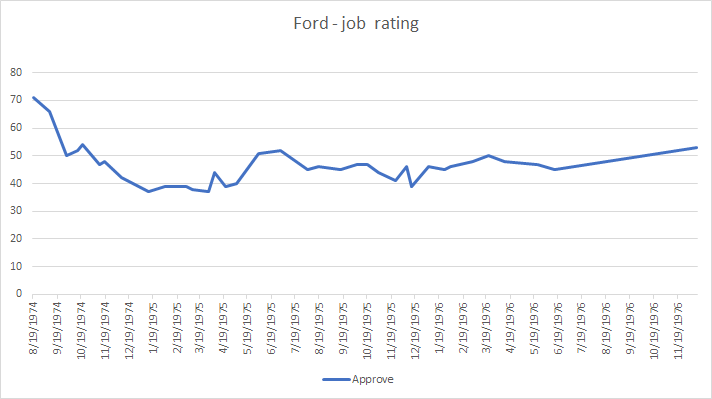 (Data from https://www.presidency.ucsb.edu/, plot: mine)

It's probably not reasonable to expect the effect to manifest over a withdrawal (even if that ends an unpopular war) coupled with the downfall of a former ally.

In general, the strongest rally-round-the-flag is seen immediately in the aftermath of an event when an aggressor killed thousands of Americans (in that event) like 9/11 or Pearl Harbor. While the Taliban killed thousands of Americans too, that was over the course of 20 years... and no US troops were killed in Afghanistan in more than a whole year before this August. So there wasn't a close-enough timing. Also, the effect is usually seen when the president initiates action against the enemy.

Outside of those seldom-encountered circumstances, the effect [on initiating use of force or more generally when POTUS "vigorously responded" to an international crisis] is usually small, between 3% and 7%, according to one paper. So maybe Ford did see a "true" rally-round-the-flag, although Saigon '75 isn't discussed explicitly in the papers I've looked at (from this rally-round-the-flag perspective).

In general (same paper) the effect is more noticeable when the POTUS had low approval ratings beforehand (so that surely works in Ford's favor) and if there is bipartisan agreement on the policy/events. That actually seems to be lacking here a fair bit, regarding Biden: the withdrawal had more or less been agreed by Trump, but some Republicans have strongly criticized the final [mis]steps that they perceived in Biden's implementation. Fox News in particular has been absolutely trashing Biden on this, featuring Trump as one of the top critics as well.

As you're talking about ongoing events... nobody has a crystal ball, but NY Mag expects Biden's rating to "muddle through" the fall of Kabul. I haven't seen any pundits (I read) suggest he's going to get a large boost from it...

And with the benefit of a bit more time have elapsed, it looks like Biden's approval rating is taking a downturn due to Afghanistan... (about 4pp). 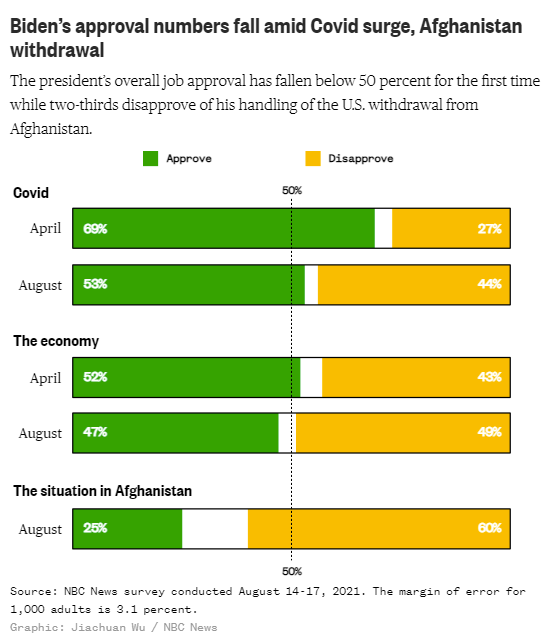 Americans seems to continue to approve the troop withdrawal from Afghanistan as a matter of principle, but disapprove of how it was done in practice.

Biden wasn't the President in 2001 when the rally around the flag effect in this conflict arose.

Not the answer you're looking for? Browse other questions tagged united-states public-opinion joe-biden afghanistan .

31
Why did Trump's "rally 'round the flag" effect evaporate so quickly?
13
Why does the Biden campaign have a $32 donation tier?
7
Did Biden underperform the polls because some voters changed their minds after being polled?
1
Why doesn't Biden have a super-high approval rating like past presidents and some governors do?
10
Is the current (Biden) admin making provisions for 'collaborators' after the withdrawal of troops from Afghanistan?
33
Why did the USA stay in Afghanistan for 20 years?
12
Have cross-border terrorist attacks in Pakistan declined or stayed the same after the Taliban takeover of Afghanistan?