Why is the rest of NATO blaming the US for the situation in Afghanistan?

"You know, it is not the European Union who decided to leave Afghanistan," Borrell replied. "It has been a decision of [former] President [of the United States, Donald] Trump, who negotiated this with the Taliban. And this decision has been implemented later by the following American administration ... And this could have been managed in a better way, for sure."

Considering that the European Union (not to mention Australia/New Zealand) are clearly capable of projecting power to Afghanistan - that's how they are evacuating their citizens after all - why are they blaming the US/Biden/Trump? It feels like if they think it's a bad idea to leave Afghanistan on the timetable set by Biden/Trump, then they could have replaced the US deployment with their own; since they didn't, they are equally at fault for the result. Accordingly, they should blame themselves (as well as the US).

Simply put it, non-US forces don't have significant bases in the region to substitute the US in this kind of time frame. Quoting from FT:

Biden administration officials had consulted with allies as they sought to unstitch Trump’s isolationist approach. On Afghanistan, however, some alliance members complained that Washington presented them with a fait accompli.

“This was discussed at length, and the US listened, but Biden had made a political decision,” said one person familiar with the withdrawal planning.

Once the decision was formalised, the UK, Turkey and Italy were keen to find a way to keep forces in place to help stabilise Afghanistan. But this was considered impossible without the vast military infrastructure provided by the US, notably air support from the US-run Bagram air base north of Kabul.

Nato secretary-general Jens Stoltenberg insisted there had been “no willingness” from other European allies or from Canada to fill in for the US once it announced its withdrawal plan.

“We must realise that when it comes to the Nato mission to Afghanistan, it was not possible to have an independent role for Germany or the European forces,” Merkel said on Monday. “We always said that we are basically dependent on the decisions of the US government.”

Also, the EU, France in particular is engaged in its own "forever war" in the Sahel (where the US plays a supporting role--one drone base; 800 personnel by one account), and France in particular is looking for a way to reduce the scale of that mission (peaked at around 5,000 soldiers), as it turned out fairly unpopular at home, after a while. (News this summer is that they were aiming for about half that. Of some further note, there are also some 12,000 UN peacekeepers in the region [MINUSMA in Mali], mostly African troops; their task is somewhat different, i.e. not "hunting terrorists", but they've been declared fair game by some of the groups, and sustained a couple hundred casualties, more than the French force lost...)

The US decided to invade Afghanistan on its own, only the UK participated to the first phase of the war. Then they asked the NATO members to support the occupation, the other countries provided troops and money, not leadership, that remained firmly in American hands. All the important decisions since then have been taken in the US.

Even on the civilian side the US kept the lead, the first President since the US occupation was handpicked by the US and confirmed by elections with little credibility. Also his successor who was elected in the following, not more credible, elections has always had strong connections with the US who helped him join the World Bank in 1991.

Note than even if the other NATO countries provided less troops than the US, they provided a lot more money which was supposed to be used for the reconstruction.

I am looking for an explanation as to why the rest of NATO are apparently unable to intervene if the US does not participate.

Why should they invade a foreign country? If you are referring to the argument of the world policeman that is just propaganda. In past and recent history every country intervened in other countries just to protect their interest. There have never been world policemen.

This is an unfair thing about war: victory is claimed by all, failure to one alone.

NATO losses, 3,502 have been overwhelmingly US-side(2400), with Canada (157) and UK (456) suffering the bulk of the rest. Not coincidentally, Canada and the UK did a lot of the fighting alongside the US initially, but withdrew in the past. Losses, which corrected for Canada and the UK's population, were quite comparable to US sacrifices.

The rest of the NATO missions left in 2021 were not in fact a deterrent to the Taliban, as was probably predictable in advance. They have neither the airpower nor the airlift capability to project a large force semi-permanently in Afghanistan. And European public opinion would most likely not have supported such a mission if it involved extensive combat.

The ANA should have held, maybe. But as it didn't, without the US, the country collapsed.

Many are upset at the takeover by the Taliban, from women's groups to Europeans, to Americans. To, of course, the Afghanistan. And NATO+US veterans too, but they did sacrifice, so they certainly have a say.

From the linked article:

“This is the greatest debacle that NATO has seen since its foundation, and it is an epochal change that we are facing,” he said this week.

Seems pre-positioning for an election campaign is a time for strong language.

It is very regrettable that the Taliban have taken over, but the people doing the regretting expected the US to foot the bill for the foreseeable future, with no exit in sight.

One can certainly argue that the US had obligation towards the Afghanis. However, had the US not invaded - entirely at its own initiative and for its own reasons - in 2001, those same Taliban would have remained in power. After the Soviets' whipping, it was clear that as much as the world was aghast at Taliban behavior up to 2001, no one was going to intervene militarily. Not until 9/11.

There is a lot of soul-searching to be done, certainly. By the successive American administrations (the military did its bit), most of all. By the Afghanis? Perhaps, considering ANA's collapse, except it would be blaming the victims of what's likely going to be a bloody Taliban mess in the future. But for NATO to absolve itself of any blame goes right back to the Tacitus quote above.

As to the greatest NATO challenge?

Is Afghanistan in any of these? No. Will it embolden challengers like China and Russia? Perhaps. But, much like Vietnam before, a massive long term commitment of US forces in an area of secondary concern does not happen in a vacuum - US troop and equipment readiness is weakened in its capability to resist its likely peer enemies. It is far from certain Russia and China would not have preferred a continued drain on US resources, even if they will benefit from a loss of US prestige, confidence and influence.

And you can, of course, intra-American fingerpointing. Reps will blame Biden. Dems will blame Trump. Bush's decision to go after Iraq without finishing Afghanistan will, deservedly, get scrutinized. But perhaps the greatest blame is to be put on the US congressfolk that, right after the Afghanis kicked out the Russians in 1992, decided not to fund any relief for their formerly useful allies.

Last, if this debacle motivated non-US NATO members to fund their defense to the agreed-upon 2%? One can certainly hope.

(image copied from the above link) 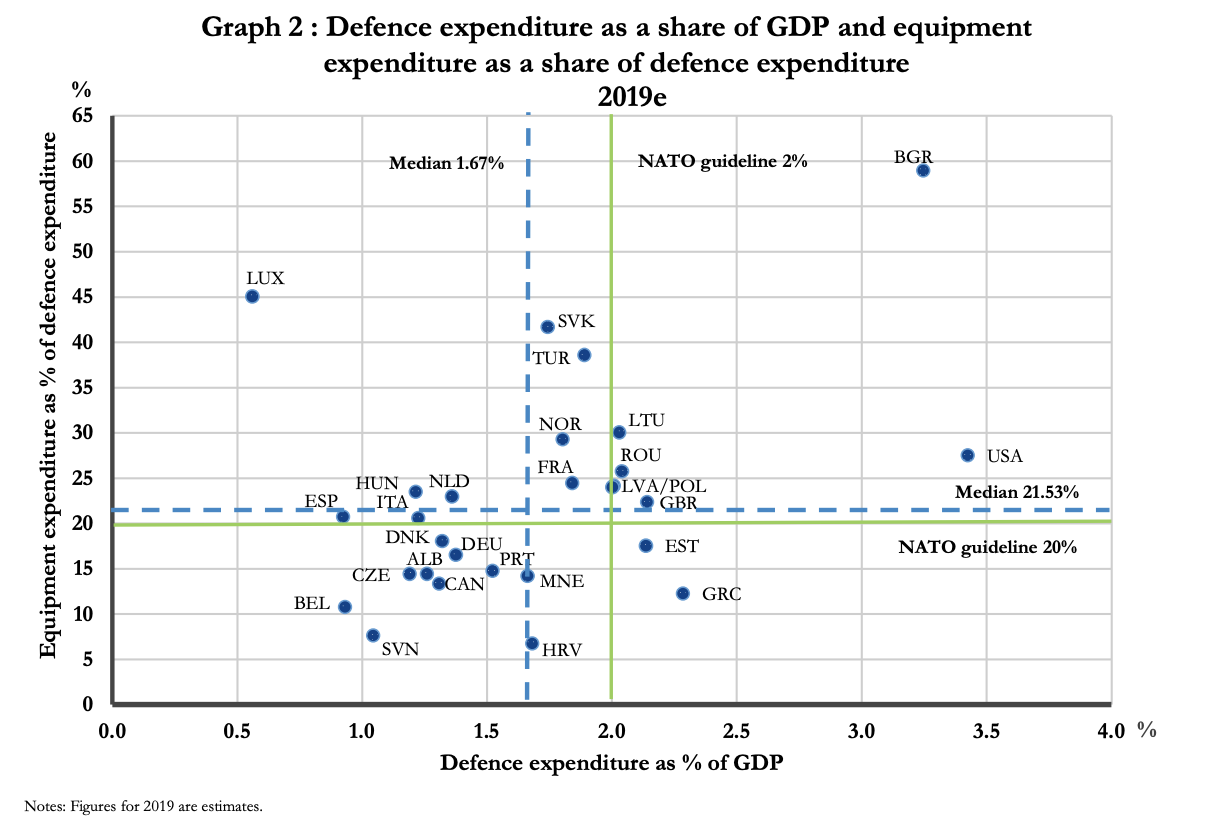 Not the answer you're looking for? Browse other questions tagged united-states nato afghanistan taliban .

2
Why did the US completely depart the Bagram Air Base?

11
Why would Trump call out Germany saying they owe the US and NATO 'vast sums' of money for defence?
0
Do any European politicians advocate for creating an European Army and leaving NATO?
9
Criticism of Trump's drawdown of forces in Afghanistan, what would be the alternatives?
12
Why hasn’t Ukraine joined the North Atlantic Treaty Organization (NATO)?
42
Are there any reliable indications on popular sentiment in Afghanistan for/against the Taliban?
10
Did all European countries choose to evacuate their diplomats from Afghanistan?
5
Why did the visa arrangements not happen before US and allies leaving of Afghanistan?
12
What determines whether Western countries (and NATO) recognize separatist movements? (especially when comparing Kosovo and the Donbass)