Why are Ceuta and Melilla not considered colonies?

Ceuta and Melilla are two cities from Spain in African territory. 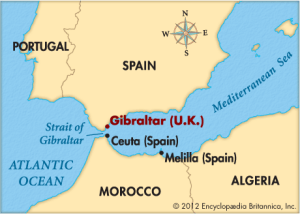 According to the dictionary, a definition for the colony is:

And two European cities in Morocco seem to be "people living in a new territory but retaining ties with the parent state".

Another definition from Wikipedia is:

In political science, a colony is a territory subject to a form of foreign rule. Though dominated by the foreign colonizers, colonies remain separate from the administration of the original country of the colonizers, the metropolitan state (or "mother country")

In this case, there is a "foreign rule" but Ceuta and Melilla are not separated "from the administration of the original country of the colonizers".

I've seen this map where Gibraltar is considered as "Non-self governing territory" (like Western Sahara from Spain) but Ceuta and Melilla don't appear. 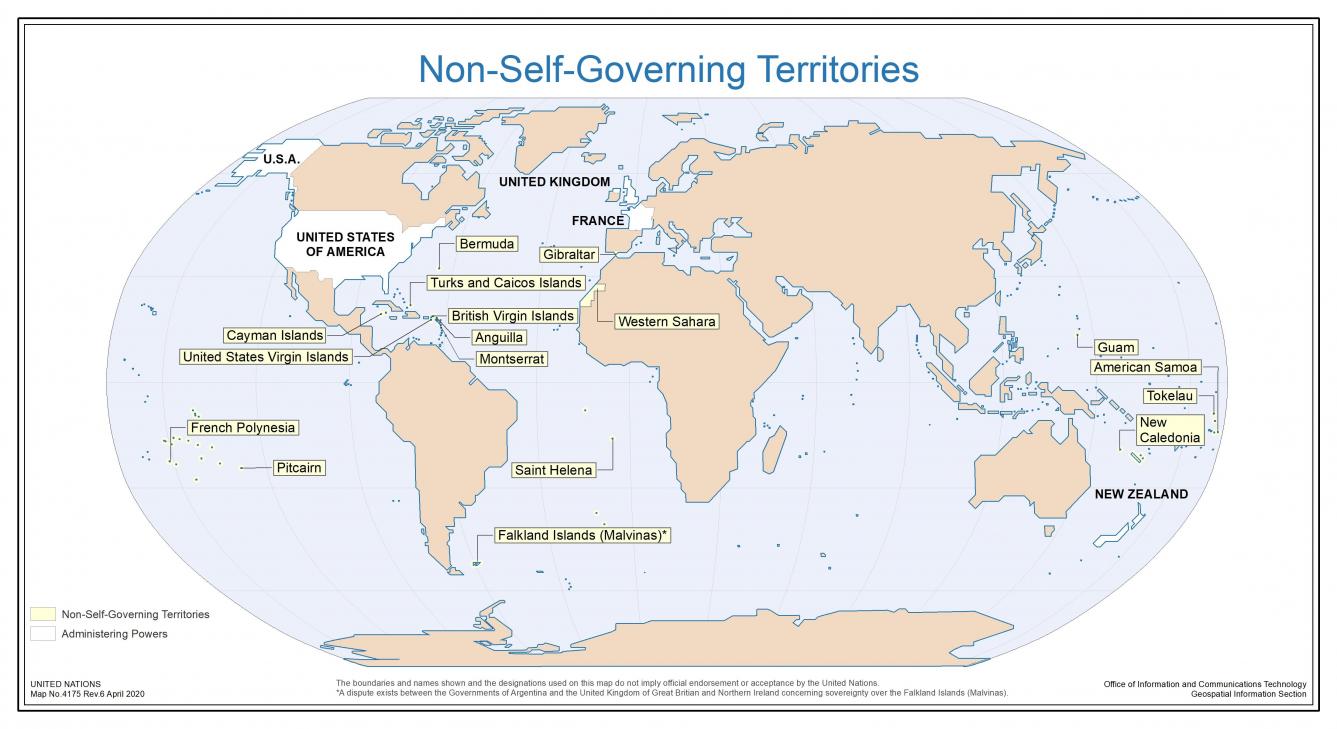 I've found also this article where a Spanish ambassador says about to compare Ceuta and Melilla with Gibraltar:

"It is absurd to compare them," he said. "[Ceuta and Melilla] have never been colonies and are not now."

So, Ceuta and Melilla cities have never been colonies and also are not colonies now. But why? Why is another example as Gibraltar is considered a colony but not two cities on another continent?

The logic that Spain applies is that these two enclaves are legally and politically part of Spain. Whereas Gibraltar (for example) is a subordinate entity, owned by the UK, but not part of the UK.

Your source explains this reasoning:

Gibraltar, [the Spanish government] point out, is a colony. Ceuta and Melilla, both military emplacements, are fully paid-up parts of Spain whose citizens elect their own representatives in the Madrid parliament and have exactly the same rights as any other Spaniard. Source

You might think this sophistry. Certainly the Moroccans disagree and have demanded the return of these colonies/enclaves.

By whom? By the Spanish ambassador? The terms colony and colonial have a highly negative connotation nowadays so get used by whoever wants to criticize something. In this case, Spain is criticizing Gibraltar, so of course, that's a colony.

Conversely whenever referring to your own dominions, or when you to remain polite and neutral, you call such areas overseas territories or some such.

Therefore, Ceuta and Melilla are not colonies, to the Spanish ambassador.

Any what does Morocco think?

Morocco has claimed the territories are colonies.

You can see the same terminology games with the Falklands.

Or some US territories in the Pacific: Most countries have given up their colonies. Why hasn’t America?.

Few discussions of indigenous issues in Canada don't include the term colonization, often to refer to modern contexts, at least when its indigenous people doing the talking. Quite the opposite when it's folk claiming all is well.

Basically, nowadays territories vs colonies is a highly subjective term and indicates neutrality vs disapproval, respectively. In the past, before 50-60s and decolonization, Western nations made no bones about using the term colony.

Ceuta and Melilla are not considered colonies in any international agreements because they don't suit the definition of colonies.

Your mistake come from think that here is a "foreign rule" in Ceuta and Melilla. There is no more foreign rule in Ceuta and Melilla than in any other Spanish region. They have exactly the same democratic rights, and vote in the elections. They have also their own "autonomy" called Ciudad Autonomy, where they decided their regional laws in the same way than the region of Madrid or the region of Catalonia (or any other region).

Morocco claim is inconsistent since there are no historic reason for that claim. Ceuta and Melilla are not in Morocco territory, they are surrounded by Morocco. And that territory surrounded them is historically inestable, it ended belonging to Morocco as it could be ended in Argelia hands. Morocco stablished itself as a country in the XXth century, but they consider themself as heirs of the Almohads. However the Almohads also didn't control that territory consistently to consider it belonging to them. Ceuta and Melilla has been Spanish since more than 400 years ago, it is difficult to apply the concept of colony to them. As some comments point is like to say that Istambul is a colony of Turkey.

I am Spanish so I can give you a insider perspective about the comment of Spanish ambassador. From Spanish perspective Gibraltar is a region that was conquered from Spain not so long ago, in a war where other european powers participate in internal Spanish matters. Spain was already very established and England took a part of us. Also the people living in Gibraltar suit very well the definition of colonizers since they went from England and put themselves there, they have no mix with locals. People in Melilla and Ceuta are genetically very mixed with berbers. Of course, at the end people of Gibraltar live there since generations, and I don't see lot of point to this claim of Spain (being fair or unfair is time to forget it)

The term colony is obviously rather contentious as it is generally understood in a negative manner in the late 20th and 21st century. Thus, in many cases people have labelled regions as 'colonies' of the country controlling them mainly to make a political point of the controlling country being an oppressor or the region being entitled to independence/joining a different country.

Looking at the historical idea of a colony, however, the most defining question was often 'does the region have representation in national politics in a similar manner as the mainland?' For example, take a look at the federal German election of 1903: As shown in the map below, deputies were sent to the Reichstag from all of the German constituent states and the Imperial Territory of Alsace-Lorraine which was considered part of Germany proper. No deputies were elected from any of Germany's colonies (e.g. present-day Namibia). 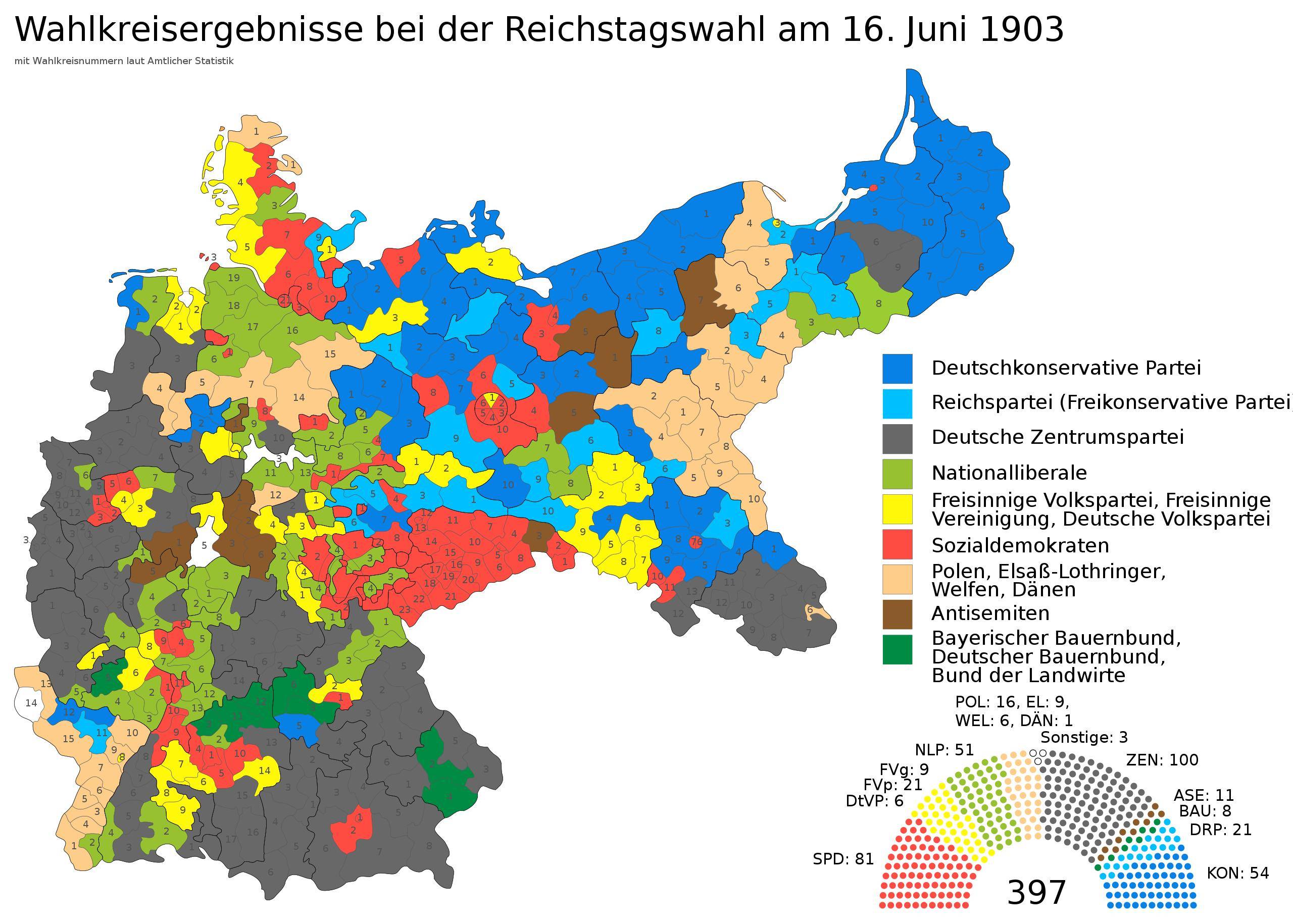 Applying this school of thought to the questions of Ceuta, Melilla and Gibraltar:

So looking at this simple denominator it becomes clear why Ceuta and Melilla would not be considered Spanish colonies while Gibraltar would be considered a British one.

In the same vein, the Channel Islands and the Isle of Man could be considered UK colonies as they also do not participate in UK general elections and thus have less representation than e.g. Wales.

Not the answer you're looking for? Browse other questions tagged spain colony .

8
How did the UN (or at least the member states which were involved in this decision) motivate the rejection of the Gibraltar referenda?

18
What are the main policy differences between Spain and (hoped-for) Catalonia?
6
Would the Spanish People's Party have the capacity to veto Scotland's entry to the EU while governing in minority?
5
Why are anti-independence Catalans so silent?
6
Why are Spanish parties imposing new elections in Catalonia?
6
What disadvantages are there for a region in declaring independence, if that declaration is not widely recognised
3
Why is the status of Gibraltar considered disputed (by some)?
10
What is the rationale of not allowing dual citizenship?
0
Why did the UK agree to Spain's NATO membership seemingly without any Spanish concessions regarding Gibraltar?
16
Why are Spaniards disproportionately very dissatisfied with Spain's political system?