Military Equipment left in Afghanistan - US or ANA property?

Lots of the media (news sites and social) is talking about all of the equipment left in Afghanistan. Lots of the discussion (and confusion) is about generally how "The USA just left billions of dollars of our equipment for the Taliban to take."

From my understanding this is misleading. Do we know how much equipment was actually still property of the USA? Since the US hasn't been in a combat role in Afghanistan for over 7 years, from what I gather, lots (most?) actually belonged (legally) to the ANA. So while the equipment itself might be American/American made, it was not ours to take back or otherwise destroy.

How much of the equipment the Taliban seized belonged to the Afghan Government/ANA vs the US? Are there any good sources that are tracking this?

Edit: I apologize for the lack of clarity. I'm currently seeing reports and social media posts, some anger is directed at the fact that the Taliban is now in possession of lots of military weapons and equipment that the US brought in (e.g. M4 rifles, humvees, body armor, etc). "Why would the USA just abandon all this, instead of taking out of Afghanistan so it doesn't fall in their hands." is the basic gist of the argument. However, from what I've read is that lots of the equipment/weapons wasn't property of the USA to take back - it was given/sold to the Afghan Government/National Army in the months/years before this pullout.

The question is honestly somewhat ill-posed because the US passed over a fair amount of equipment to the Afghan Republic forces as they dismantled US bases this year. Some other equipment was shipped back to the US and some was even destroyed on site.

The Western official familiar with the packing up process said U.S. forces face a dilemma: Hand off largely defunct but intact equipment and risk having it fall into hands of enemy forces, or trash them and anger Afghans.

To make his point, he recounted a story: Not so long ago, U.S. forces discovered two Humvees that had found their way into enemy hands. They had been refitted and packed with explosives. U.S. troops destroyed the vehicles, and the incident reinforced a policy of trashing equipment.

Now part of the "blame game" (or "keeping them honest", depending on your POV) involves some 25 Republicans Congressmen asking the Pentagon for a detailed accounting of what was passed to the Afghans in the past year and what was destroyed. I'm guessing this is in order to second-guess what should have been done.

So asking "US or ANA property?" is a fairly bad framing without even considering: at what point in time?

Of course, the strategic situation being different after the US withdrawal, things like e.g. humvees can't be used anywhere as easily to attack US troops as in that quoted story... since the US troops are not on the ground anymore, so it's not entirely clear that favoring leaving more stuff to the (Republican) Afghans was a bad call... especially if they were actually expected to hold their ground against the Taliban for a while using said equipment.

No, we don't. According to reporting by the Independent, there's no total account of all the military equipment left behind, regardless of whether it was abandoned by the US or given to the ANA who then abandoned or surrendered it so it could eventually fall into the Taliban's hands:

On Tuesday, President Biden’s National Security Adviser Jake Sullivan admitted they didn’t have a “complete picture” of the military equipment left behind.

“But certainly a fair amount of it has fallen into the hands of the Taliban,” Mr Sullivan said.

Some equipment was abandoned by the US without formally handing it over to Afghan troops, again from the Independent:

In its haste to depart Afghanistan, the US military was forced to destroy or abandon much of the arsenal it had built up over the 20-year occupation.

It’s not only military equipment that was left behind.

When the US abandoned its Bagram base in July without even informing the Afghan army commander, it left behind an estimated 3.5 million items.

The Associated Press reported that this included thousands of civilian vehicles, many of them without keys to start them, and hundreds of armored vehicles.

General Mir Asadullah Kohistani, Bagram’s commander, told AP that the US also left behind small weapons and the ammunition for them, but took heavy weapons with them.

Effectively though, the Bagram base was handed over to the Afghan military. On the other hand, one could argue that some of the US equipment like the civilian vehicles without keys were abandoned by the Americans. Without keys, they couldn't be used by the Afghan forces in a way that they would use gifted equipment. The whole base later surrendered to the Taliban, according to the Associated Press:

Later, Afghan forces at Bagram Air Base, home to a prison housing 5,000 inmates, surrendered to the Taliban, according to Bagram district chief Darwaish Raufi. The prison at the former U.S. base held both Taliban and Islamic State group fighters.

The Pentagon holds that they have been deliberate in what equipment to withdraw and what to destroy, again from the Independent:

Pentagon press secretary John Kirby said Wednesday that the decision on what equipment to withdraw and what to destroy had been “very deliberate”.

I don't think you are going to get a more detailed account of what has been left. Firstly, there's no complete overview of all the equipment and where it went. Secondly, if there are certain items that have been left behind in an inappropriate way (e.g. vehicles that haven't been rendered useless) then the US probably isn't going to publicize it and the Taliban doesn't know who the most recent owner / user was.

It may be possible to lookup via DOD spending justification documents, but you have to know what to look for. Searching for the phrase "Afghan Security Forces Fund (ASFF)" and domain:.mil may help.

For example, here's a February 2020 report that can give you an order-of-magnitude idea of recent equipment expenditures for Afghanistan Security Forces. Of course, you would need to find another way to estimated US-owned equipment abandoned, but the information is probably out there. 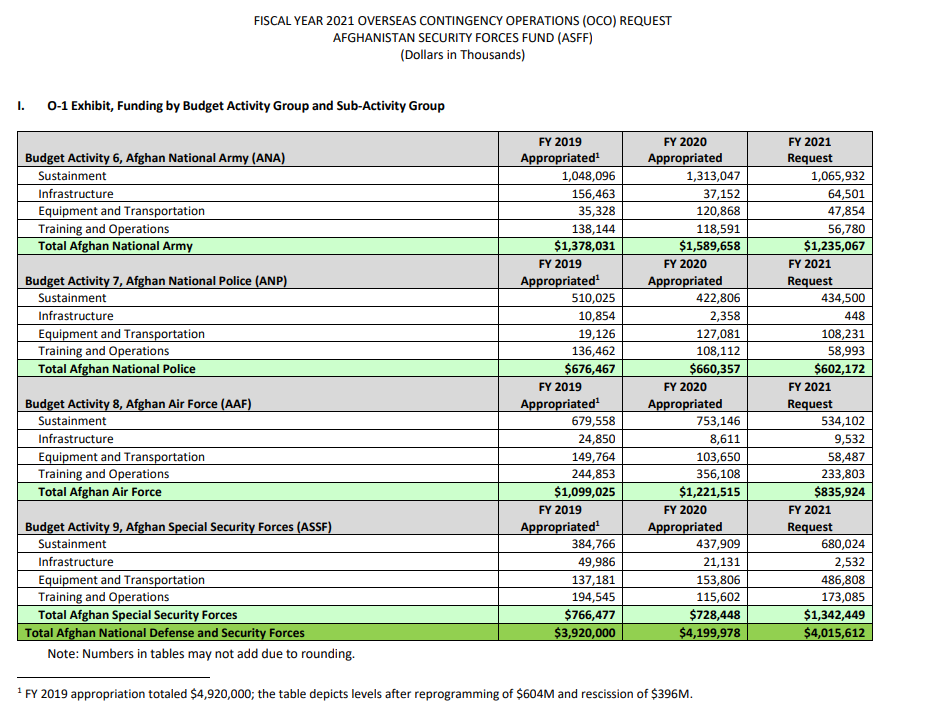 Legally, any of your property is either in your possession, or it is in someone else's possession to look after it, or it is lost, or it is abandoned.

Abandoned property can be picked up by anybody.

Not the answer you're looking for? Browse other questions tagged united-states military afghanistan .

54
Why did the US military leave Afghanistan in such a rush that they left so much equipment behind?
7
Why was Bagram Air Base abandoned so early in the withdrawal?
0
Is there anything the United States can do to stop the Taliban from selling American made military equipment to Iran?

9
Criticism of Trump's drawdown of forces in Afghanistan, what would be the alternatives?
36
Has the American left abandoned the anti-war movement?
42
Are there any reliable indications on popular sentiment in Afghanistan for/against the Taliban?
4
Is there an overview of battles between the Afghan Army and Taliban forces during the Resolute Support Mission (2015-2021)?
54
Why did the US military leave Afghanistan in such a rush that they left so much equipment behind?
1
How credible is the Afghanistan's ghost soldiers claim?
2
Can the effect of US voter ID and registration laws on fraud be compared state-to-state?
6
What do Republicans criticizing the withdrawal from Afghanistan say they would have done differently, given Trump's agreement w Taliban?