Why wasn't Point Roberts given an exception to the Canada-US border closure?

Point Roberts is a small community in Washington off the tip of the Tsawwassen peninsula south of Vancouver, with a population of around a thousand. The only roads connecting Point Roberts to the rest of the United States are through Canada, about a 40km drive to the Peace Arch border crossing. The only other means of connecting to the the mainland US are by using private boats/planes.

In response to the COVID-19 pandemic, the Canada-US border was closed for non-essential travel. This resulted in mass economic damage to the community, as well as created hardships due to the lack of veterinarians and dentists in the community, to name a few. 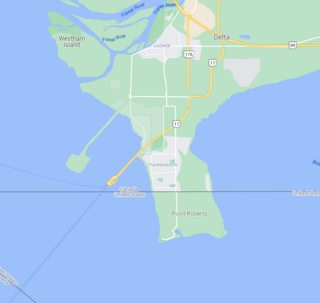 "When you have a 38,000-square foot store that is built, staffed and stocked to serve 8,000 customers a week and you're only seeing about 800, it's really hard to stay in the black. And we have not been able to."

Point Roberts residents were actually given some leeway for their own travel to/by Canada, at least recently, e.g.

Residents can visit the closest Canadian community, which for Point Roberts is Tsawwassen, without having to prove they’re vaccinated or produce a negative COVID-19 test. [...]

“If people want to go beyond that they have to have a negative PCR test to go into Ladner, Vancouver, Burnaby, etcetera,” said Point Roberts fire chief Christopher Carleton.

Why Canada didn't allow "business as usual" for Canadians (going to Point Roberts) during the pandemic is harder to find spelled out, but Ted's answer probably has a reasonable guess. Also, US "hard border" policy (during the pandemic) might have had something to do with it:

[Carleton] is pleading with the U.S. government to make an exception and let vaccinated Canadians cross the border into Point Roberts.

For some further background, border crossings at this point were quite substantial in pre-pandemic times:

Roughly 80% of the spending in the exclave is done by Canadians. They own more than 70% of the property; in pre-pandemic summer months, Canadians would flock to their homes in Point Roberts and the population usually swelled to about 5,000 for the duration of the season.

The problem is best illuminated by looking at data from the federal Bureau of Transportation Statistics. In 2019, more than 1.4 million people crossed the Boundary Bay border checkpoint into Point Roberts by car. So far this year, that figure is 42,100 — that accounts for just 3% of the people that visited Point Roberts by car in 2019.

I'm guessing a lot of those were counting the same individuals over multiple trips, but that million-crossings figure must have "looked scary" from a public health perspective in a pandemic situation.

At one point, due to the slower vaccination pace in Canada, someone even suggested that the area be used for vaccine tourism, but the US CBP shot down the idea:

"Travel for the sole purpose of obtaining a vaccination is not permissible under current travel restrictions," said a statement emailed by a CBP spokesperson late Tuesday. "The border remains restricted to essential travel only."

Because an actual fix would have been more complicated than you think. And, yes, as immediate neighbors to Point Roberts, which I have visited several times, us BC residents are very aware and sympathetic of that city's plight.

First, let's be clear, the management of border crossings wrt US enclaves has not been free of stupid moves on the Canadian side. I remember a reading about a Canadian woman foraging (for mushrooms?) crossing the border in Alaska by a few meters and getting whacked with 14 days of quarantine on "re-entry".

Second, the main problem with Point Roberts isn't US-to-Canada travel. Nor, really, it is US-to-US travel. Your map leaves out that it's a short, 20 km, crossing on fairly sheltered water to get to Blaine, WA on the continuous US. It is certainly not about goods and supplies as commercial trucks have been considered an essential service, along the full border, from the start of the pandemic.

No, the real problem is that Canadians, who drive a lot of Point Roberts' economy can't visit anymore.

Since mid-summer (this article was in Nov, 2020), the Chamber of Commerce said the community has been paying $40,000 per month for a twice weekly boat shuttle to Bellingham.

Residents have five hours to shop before returning home but Calder said the round trip can take nine hours and the sailings are often cancelled due to weather.

Meantime, Calder said businesses in Point Roberts are down 85 per cent because the Canadians who own 75 per cent of properties are currently shut out of the community.

Now that the border is being cautiously reopened US-to-Canada, these restrictions are even lessened, for Point Roberts residents (Aug 1, 2021 article):

As of Monday, fully vaccinated Americans are able to enter Canada and even skip quarantine. But residents of Point Roberts, Wash., Hyder, Alaska, and the Northwest Angle in Minnesota will be allowed to enter Canada regardless of their vaccinated status.

All three communities are cut off from the rest of the U.S. because of the placement of the border.

The Canadian Border Services Agency says residents of Point Roberts may enter Canada regardless of their vaccination status to "carry out everyday functions and access goods and services within their neighbouring Canadian communities."

But Canadians are still not allowed to visit Point Roberts, making this somewhat moot:

So far, the U.S. has announced no plans to open its borders to Canadians, whom businesses in Point Roberts rely on. The community's economy has nearly completely crumbled, shrinking by 80 per cent.

At a guess, a more useful approach, from the start, would have been to allow border crossings as usual, with normal border controls, both ways, between Point Roberts and Canada. But enforcing quarantines USA to Point Roberts. That would have kept Canadians safe and Point Roberts prosperous. But it would have been a bitter pill for US sovereignty to contemplate, which is why it was never, to my knowledge, considered.

Hyder, AK and the Northwest Angle, MN are different in nature because they are essentially inaccessible except by air from the US, unlike Point Roberts where boats provide "easy" access. So there was never much risk of US-to-enclave covid spread and then enclave-to-Canada spread. As a result, rules have been more relaxed for them since October 2020 and they were never real destinations for Canadians anyway.

FWIW, minus any problems accessing the US itself, the folk at Blaine, WA - the East side of that line on my map - have had essentially the same problem, though at a hopefully somewhat lower scale. They can access the US just fine, but relied on lots of Canadian customers. The thing is, this part of Washington is fairly rural and cheap and is right next to some of highest cost of living cities in Canada so in normal times the economics favor cross-border integration.

The main issue here seems to be that Point Roberts' economy depends heavily on casual visitors from Vancouver: not tourism, precisely, but local Canadians who cross the border to shop, go to bars or restaurants, send US mail without international rates, and the like.

The US-Canada border was closed to inhibit the spread of Covid-19. Since the majority of transit into and out of Point Roberts was for convenience and entertainment, there was no particular reason to exempt those border crossings, at least no reason that outweighed the prophylactic measures the governments were trying to impose. People could still cross the border for emergencies and essential services, of course, but the town was bound to suffer the same economic hardships as any other city or town dependent on the influx of foreign money.

Not the answer you're looking for? Browse other questions tagged united-states covid-19 canada borders .

24
Why hasn't Canada signed the Apostille Convention?
15
Why will Canada prevent selling marijuana "in the same location as alcohol or tobacco"?
0
Why do the US and Canada accept asylum seekers on their soil rather than funding refugee camps abroad?
12
Why didn't Canada leave the UN conventions on illicit drugs before legalizing marijuana?
2
For a provincial election, how long after the voting are the results given out in Canada?
5
When was the last time the Canada–US border closed to visitors?
3
What's the meaning of a golden border around an open letter in Canada?
2
How did Canadian politicians bypass the Canada U.S. border closure in December 2020, to vacation in the U.S?