Has there been any country that successfully reversed a demographic decline?

I've seen many news items about how some countries are experiencing demographic decline and have implemented so-and-so policies to counteract the decline, such as:

However these policies don't seem to have worked; all the countries continue to experience demographic decline.

Has there been any country that has successfully reversed demographic decline in recent history? If yes, how did they do it?

Edit: I am especially interested in any countries that successfully raised their fertility rates.

The population of Germany declined from 2000 to 2011, it then increased. 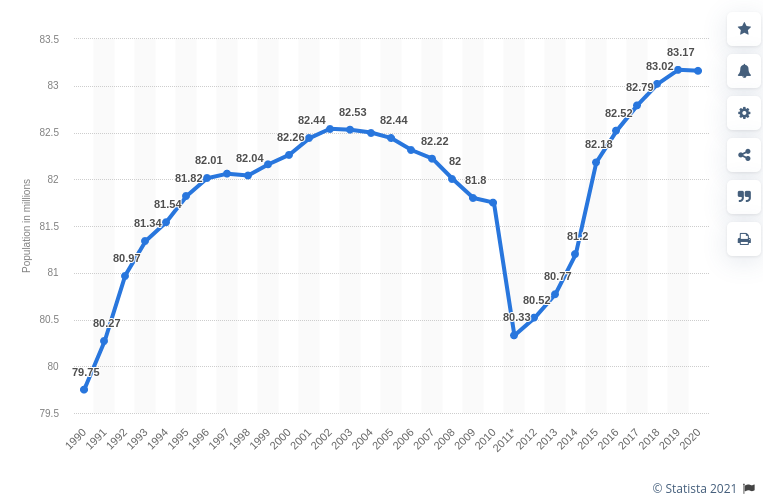 This answer is only looking at fertility rates, not other measures, such as immigration.

Also, when looking at fertility rates take into account that 2.1 is the neutral no-increase/no-decrease rate

I don't think there has been a case in modern times where a country wanting to reverse a fertility drop has actually achieved this. At best, they have clawed back some losses and gotten nearer to 2.1. You can look at the World Bank data in my first link, under the graph. They only show downwards trending minigraphs.

The fact that the UN specifically cites France, Sweden and Germany as examples indicates there is not much better going on.

Ceausescu in Romania famously tried and it was a coercive failure.

However, looking specifically at the factors discouraging working women from having children does seem to at least mitigate the drop to a softer landing than some of the fertility 1.2-1.5 rates that are becoming common. A dropping population is not necessarily a bad thing, but a very quickly aging population is however problematic.

You can play with the fertility metric at the World Bank and see who's been up to what. I picked Sweden, France and Germany from 1970s on. All 3 showed some level of improvement, until 2010, after which there was a marked decrease which I would attribute to uncertainty since the 2007 financial crash. 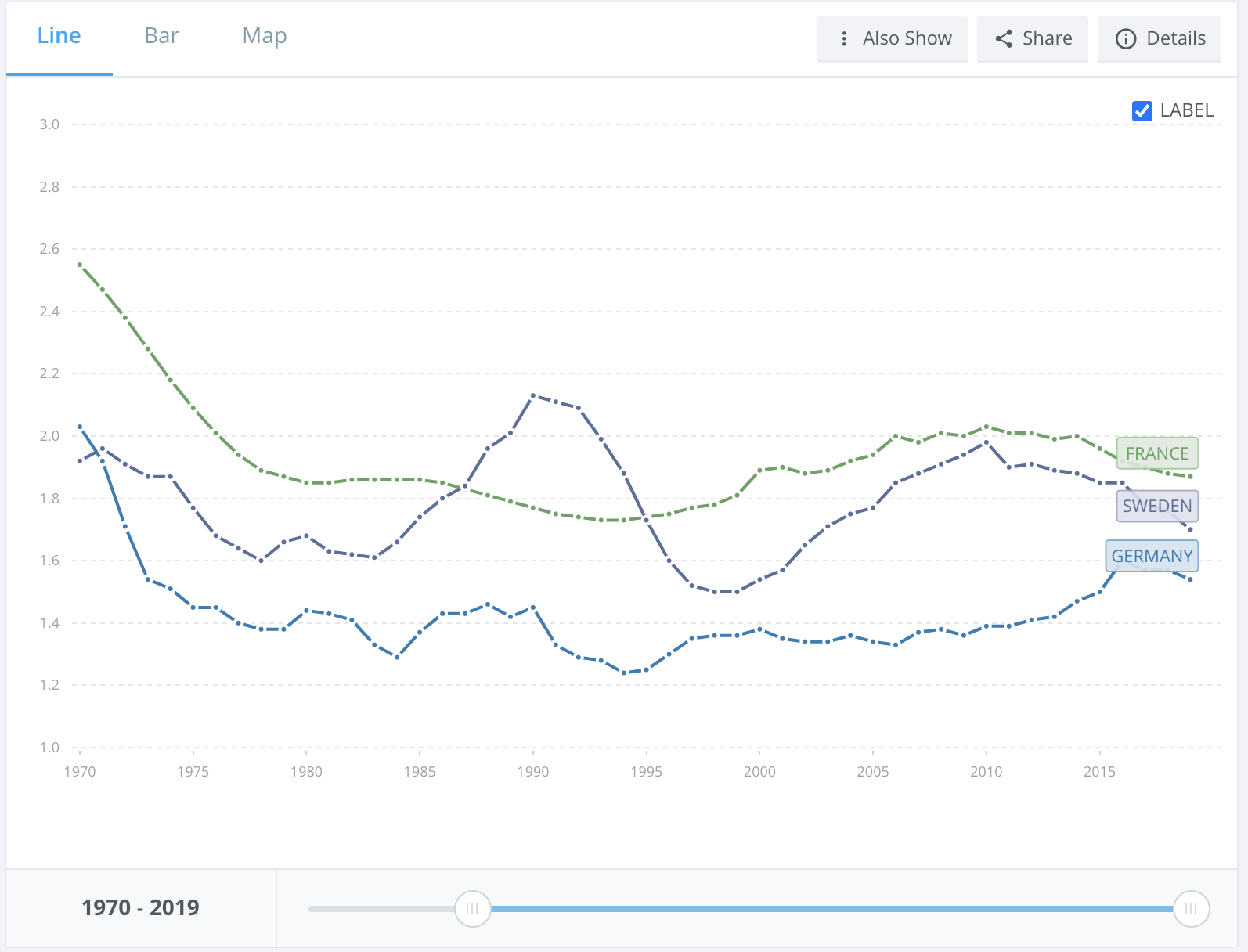 I took 1970 as a start since before then most Western countries had a much higher birthrate above 2.1 replenishment which would not have been a target for keeping up.

France has long had the intent of keeping up its birthrate and has deployed some corresponding measures such as cheap/free child care and per child subsidies.

Sweden has also strongly promoted women's rights and things like the possibility for a father to take parental leave, thus allowing women some leeway in the have-child/have-career choice.

The fertility rate in Europe is relatively low, with no country above 2.0, and has declined in recent years. Several factors could drive this trend, including socioeconomic incentives to delay childbearing, a decline in the desired number of children, a lack of child care, and changing gender roles. The fertility rate in the overall Euro area is 1.5.

The other explanation for the baby boomlet is that Germany has made it easier to raise children. What crushes birth rates, whether in Europe or East Asia, is opening higher education and attractive jobs to women while continuing to expect mothers to do the great majority of child care and housework. If a society forces women to choose between jobs and motherhood, many will keep working. Western Germany has a tradition of stigmatising working mothers, and a special slur for them: Rabenmutter (“raven mother”).

This is gradually changing. In 2007 Germany’s federal government introduced generous parental-leave laws and tweaked the rules to encourage fathers to take time off. In 2013 it declared that children over one year old had a right to nursery places. Although there are still not enough places to meet demand, supply is growing. Between 2006 and 2017 the number of children under three enrolled in nurseries rose from 286,000 to 762,000.

The Economist also states that increased fertility amongst immigrants does not have as much impact as could expected:

In the early 1980s women with foreign passports in Duisburg had a birth rate much higher than native Germans (see chart). Most of the foreigners were Turks, who had settled in this Ruhr Valley city for its industrial jobs and brought their big-family culture with them. But then came an astonishing drop. Today foreigners are actually slightly less fertile than natives. That is saying something: German women in Duisburg, and in Germany as a whole, do not have nearly enough babies to keep the population ticking over naturally.

Xenophobes and xenophiles share a belief in the fecundity of newcomers. “Immigrants are more fertile,” explained Jeb Bush, an erstwhile American presidential candidate (and xenophile) in 2013. “They love families and they have more intact families, and they bring a younger population.” That is still just about true in America, but the gap is vanishing.

This is what the UN had to say:

Box 9. A long path to modern family policy package in Sweden and France

Sweden has been developing a consistent policy package for many decades. The foundations of the modern welfare and family policies in Sweden were laid already in the 1930s, when the key reformers such as sociologist Alva Myrdal promoted policies incorporating a childcentered perspective, reproductive rights and gender equality (Myrdal 1941). In the early 1970s, policies responded to the growing labor force participation of women and to the declining fertility by offering parents extended parental leave rights and cash transfers. The government also reacted to the change in women’s social roles by gradually expanding the childcare coverage. It was recognized that dual earner family model can have numerous positive consequences for families as children will have the opportunity to grow up in wealthier families and receive high-quality pre-school education (Wells and Bergnehr 2014).

Already in the 1970s Sweden introduced parental leave (which replaced mother-oriented maternity leave) and started to expand public childcare. In 1979 the government granted parents with preschool children the right to reduce their working time by 25% (Wells and Bergnehr, 2014). Parental leaves were paid and the benefit was tied to parents’ earnings before the leave. This system was designed to encourage women to establish their position in the labor market before having a child and to provide incentives for men to make use of parental leave. Since such policy might have led to delayed parenthood, the Swedish government introduced incentives for parents to space their children more closely (see Box 3). The parental leave entitlements and the right to work part-time were accompanied by a gradual expansion of public childcare for children aged 1 to 6. The number of publically funded childcare places increased from 12,000 in 1965 to over 136,000 in 1980 and to 730,000 by 2002 (Earles, 2014). Childcare expansion intensified in the 1990s when the government introduced the right to childcare for every child aged 1 to 6 with a waiting time no longer than 3 months (Earles, 2014). Since 2008 parents can also choose to provide care themselves and to this end receive a home care allowance (Ferrarini and Duvander 2009).

Sweden was one of the first countries which recognized the need to support fathers in pursuing their rights to take care of their children. Already in the 1970s Sweden introduced the right for fathers to make use of parental leave and individualized it in the 1990s, gradually extending the proportion of the leave reserved for fathers (Duvander and Johansson 2012). This policy was consistent with the idea of improving gender equality in both the public and private sphere, which has been underlying the Swedish family policy model since the 1970s. Finally, employers in Sweden have relatively high awareness about employee’s family obligations (Den Dulk et al 2014). Companies in Sweden have flexible working hours and often allow people to work from home and company meetings are not scheduled in the early mornings or late afternoons (Hobson et al 2011; Wells and Bergnehr 2014).

A consistent family policy package has also developed in France. While the main objective of the Swedish family policy model has been to achieve gender equality, the French policies have been foremost concentrated on improving family and children’s well-being (Gauthier 1996). The French family policy model is thus built on generous cash transfers toward families combined with an extensive childcare provision. From the beginning public childcare 73 aimed to guarantee children equal opportunities. Later on, the aim to allow women to participate in the labor force increased on importance. French cash transfers have a pronatalist character and are foremost directed to large families (Martin 2010). Tax breaks form one of the cornerstones of the French family policy system. Taxable income can be reduced with increase in family size (Letablier 2003). In addition, France grants universal family allowances to parents with at least two children, special allowances for poor families and housing allowances (Thévenon 2016).

Families in France enjoy an exceptionally well developed system of childcare services. The idea behind childcare expansion in France is deeply rooted in a widely shared belief that the state is responsible for children’s well-being, including care. A special feature of the French childcare system is its diversity, which accommodates parents’ and children’s diverse care needs. Childcare can be provided in traditional daycare centers organized by municipalities, but also in family daycare centers where care is provided by accredited carers, company crèches and kindergartens (usually run by public companies) as well as drop-in centers which provide temporary irregular care for a number of hours (OECD 2006b). An important feature of the French family support system is a shorter working time, with a standard work week of 35 hours. Although work week was mainly shortened to reduce unemployment and facilitate work sharing, the second objective of this reform was to improve work-family balance (Letablier 2003). The policy has indeed led to the shortening of the actual working time and a decline of the working time gap between parents, supporting full-time participation in the labor force of both partners (Letablier 2003).

The consistent and generous family policy packages of Sweden and France, which have been adjusted to societal changes and population needs over time, have been often considered as important reasons for relatively high fertility in the two countries (Björklund 2006; Thévenon 2016) and for low educational differences in fertility in Sweden (Jalovaara et al 2018). They may serve as examples for family policy reforms in other countries dealing with the challenges of changing policy needs and declining fertility. Box 10 discusses an example of such family policy reforms in Germany.

Not the answer you're looking for? Browse other questions tagged demographics population .

6
Is there any developed country besides Singapore with policies regarding the racial composition of the population?
4
Are there any scientific studies supporting the political claim that ethnic diversity is a strength?