How do democracies other than the US handle changes to district maps?

Every representative democracy needs to have some method of dividing up territory into districts such that the people within that district can choose someone to represent their interests to the state or national government. Those same maps also need to be periodically updated to reflect demographic changes as people move around or as new people register to vote. In the U.S. this process has become deeply political, and the party in power when the maps are redrawn will try to make those maps as favorable to themselves as possible. Even in cases where they can't gain seats outright, the districts will often be drawn in such a way that they concentrate people of a particular political preference, creating 'safe' districts where the only meaningful challenge to a representative can come from their own party.

The obvious solution would seem to be taking the process out of the hands of elected representatives, but that comes with its own problems. How do you choose the people to update the maps? Appointed positions run the risk of corruption or of simply becoming political prizes the way supreme court nominations are now. If it is a hired position (say a division of the census department) you run the risk of breeding mistrust and resentment since people tend to be suspicious of unelected bureaucrats with no oversight. Relying on a computer algorithm just shifts the problem around, someone still has to write and update the software.

This seems like a fundamental problem, but it isn't something I have seen discussed as a hot button topic outside the U.S. How do other democratic systems handle this issue? What are the trade-offs of those solutions? Are there particular pros and cons to these alternatives that make them better suited to a particular political system? Would they still work if applied to a U.S. style system with only two major parties?

Many countries (in Europe and elsewhere) use some sort of proportional representation with multiple seats per district. Districts are very stable, possibly as large as a US state or even just a single national district. If demographic changes are so large as to threaten the balance between different regions, you can rebalance by removing or adding seats in some districts. Since the system doesn't require one seat per district, you can do that without having to redraw the map at all.

In Germany, the rebalancing is even done automatically for each election, without relying on census data or demographics. To make this happen, the total number of representatives is first distributed between the states based on the number of votes actually cast in that particular election. This occasionnally creates some nasty paradoxes because of some other features of the system but is otherwise a pretty elegant solution.

Another approach is to contrain the way the map based on stable existing divisions. For example, France has a two-round majoritarian system which does suffer from the same problem as the US first-past-the-post election but the map has to follow county lines (canton) as much as possible. Cantons were drawn in the 18th century and their boundaries are very stable. In a dense area, you will have one or two representative per canton, in rural areas there may be one for 4 or 5 cantons. This is more of a weak tradition than an absolute rule though and gerrymandering has happened in the past.

In the UK, while elected politicians do have the final decision, they make that decision in a context where a non-partisan Boundary Commission has already made public its recommendations as to whether boundaries should be changed, and if so, in what way.

Canada is going to be starting its seat redistribution process imminently, so I'll use their process as a reference (which you can find in more detail here).

After it's determined (by formula found in the constitution) how many seats each province gets, an independent commission will be appointed for each province to do their respective boundaries. The chair of the committee is appointed by the province's chief justice, while the Speaker of the House of Commons (which is a more neutral role than its US counterpart) appoints other members.

During the process of redistribution, there is an opportunity for the public to comment on boundary proposals, and a separate opportunity for MPs to make objections to the proposals. While they have to consider those objections, the commissions effectively have the final say on what the boundaries look like in each province (it does have to be signed by a Minister of the Crown, but it would cause so much of a stink if they don't that it's not worth doing).

A key idea is to reduce the importance of (narrowly or safely) winning individual districts with respect to winning the overall election or becoming the strongest party in parliament. Many, especially European countries use some form of proportional representation to ensure that winning districts is not all to important even where districts exist. In these countries, the overall seat distribution in parliament will be determined entirely by a proportional vote where every vote (using a pre-2020 US example: no matter if it was cast in Montana-at-large or Rhode Island-1) has the same weight. Even though the CDU/CSU (winners of the 2017 election) won a large majority of individual districts, that did not affect their overall seat share in parliament as that was determined by the nationwide proportional vote. Thus, the incentive to gerrymander is very low.

On top of that, German law expects districts to be compact and to follow administratrive boundaries wherever possible – as well as preferring higher-level administrative boundaries over lower-level ones. For example, the state of Bavaria is made up of 7 'provinces' (Regierungsbezirke) which are further divided into counties and county-free cities; the former are made up of municipalities while the latter may have individual boroughs. When drawing an electoral map, the province boundaries are 'hard' i.e. not violated at all. Further down, districts are drawn so that they are made up of complete counties and complete county-free cities wherever possible. If using complete counties or county-free cities would create a district too large, complete municipalities are separated and transferred to a neighbouring district. The largest (county-free) cities of Munich and Nuremburg are too large to be a single district, so when they are divided complete city boroughs are kept together. The resulting map for Bavaria is as shown below with the red lines corresponding to the election districts while the grey lines show county (and county-free city) boundaries where they do not overlap. Note that in many of the non-overlap cases, it is a simple case of a district being made up of two (or more) counties. 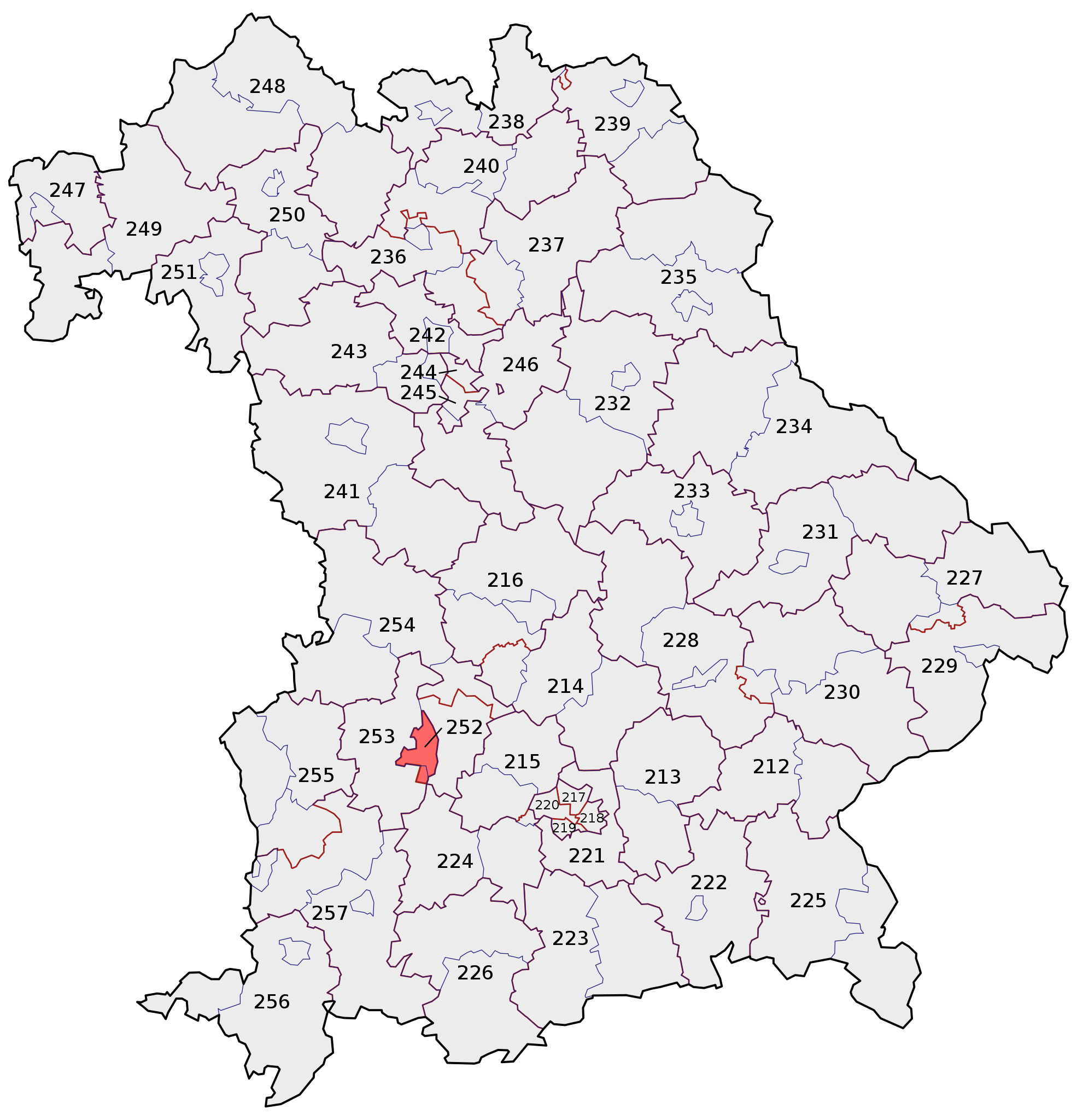 For reference, the district marked in red is Augsburg-city (which includes the municipality of Königsbrunn from the surrounding county Augsburg-county). The weirdest shapes are probably district 221 (Munich-county; i.e. the entirety of the county surrounding Munich meaning it is a single-county district) and 254 (Donau-Ries, which covers the northern bit of the province of Swabia above the district of Augsburg-county). The four small blobs inside 221 are the four city-districts of Munich and 244/245 are Nuremberg-North and South, respectively.

The exclave in 246 is an exclave of the city of Nuremburg in the surrounding county (don't ask why) and the one in 225 corresponds to the islands Herreninsel and Frauneninsel on the Chiemsee which historically belong to the neighbouring county of Rosenheim (again: don't ask why). Here, district boundaries exactly follow county boundaries.

The Federal Returning Officer does not publish maps of the districts. Instead, they publish lists in the form of:

Not the answer you're looking for? Browse other questions tagged democracy voting-districts proportional-representation redistricting .

24
What reforms have successfully avoided the issues of Gerrymandering?

4
How often have majority parties plummeted in support in one election in democracies?
1
What is the difference between Electoral College and Electoral District?
2
Can I vote for candidates from a different district in the New Jersey Democratic primaries?
6
Which states will have different electoral maps in 2020 than they had in 2016?
2
Do (district level) US House of Representatives elections record county on the ballot?
3
How could US Congress' H.R.1 - For the People Act of 2021 actually cost Black representation in the South by prohibition of partisan gerrymandering?