Why haven't any Republican-controlled states moved to ban or severely restrict mail in voting? [closed]

Ask Question
Asked 29 days ago
Active 29 days ago
Viewed 238 times
-1
Closed. This question is off-topic. It is not currently accepting answers.

The community reviewed whether to reopen this question 28 days ago and left it closed: 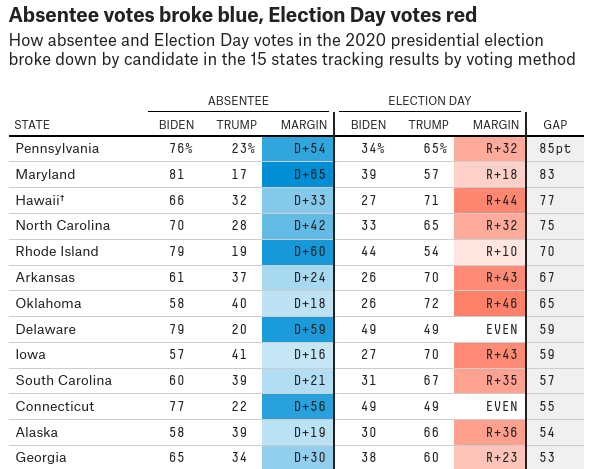 Trump, then the incumbent Republican president even won in-person votes in deep blue states like Hawaii and Maryland as well as a few others. The elections in 2021 so far show that the mail-in vs in-person partisan divide appears to be holding up. Biden won mail-in voting in states like Oklahoma and Arkansas.

Why haven't Republicans actively moved to restrict voting by mail in states that they have control over at the state legislative level, especially in swing states, as of writing?

Doing so would seem like a logical move given the fact that they passed laws trying to restrict voters that are less likely to vote for them. Such a move could be even more effective because while the gap between White and Nonwhite voters is about as large as mail-in vs in-person election-day (at least in 2020 and may be slightly larger), this could knock off more mail-in voters given enough wouldn't want to vote in person if it was the only option, and this would be a far more direct move than say closing a polling place in a heavily Democratic area.

Note: four Republican controlled states, and 3 solidly Republican states, restrict mail in voting and require disability and/or being elderly to use a mail-in ballot. But these are not new restrictions. Also, people asked if this is discrediting. I disagree because Republicans have gone on tape publicly to say not letting certain people (often African-Americans, the most Democratic major constituency of all) vote at as high of a rate would increase their odds. Yes it doesn't say that specifically but studies show Voter ID laws have these effects. See here for evidence of a modest but potentially significant effect of voter ID laws which is a precedent for such motives.

Mail-in voting is extremely popular among two groups that Republicans rely on: the military (who often need to vote from widely dispersed bases) and the elderly (who often find voting in person strenuous or difficult). As I remember, several of the GOP voting restriction bills try to split the difference by limiting mail-in to those select groups, trying by various means and tests to prevent comparatively young, non-infirm, non-military individuals from voting by mail. But banning mail-in voting entirely (by common perspectives on demographics) would hurt GOP turnout more than the Democrat.

Why haven't any Republican-controlled states moved to ban or severely restrict mail in voting?

The act requires that all U.S. states, the District of Columbia, Puerto Rico, Guam, American Samoa, and the U.S. Virgin Islands allow certain U.S. citizens to register to vote and to vote by absentee ballot in federal elections.

Several Republican-led states have passed restrictions on mail-in votes that have been criticized. Those in opposition to these restrictions characterize the restrictions in ways that may qualify as "severe".

Florida's Legislature passed an election bill Thursday that includes restrictions on drop boxes and voting by mail over the concerns of Democrats and voting rights activists that the restrictions would amount to voter suppression.

Voting rights advocates broadly criticize the law, and are particularly concerned that the way the law is written—that if you do not cast an early ballot in any elections, for two consecutive election cycles, you will be kicked off the list. “If you vote in person that will still trigger the provisions of this [law] to begin the process of purging you from the list,” says Alex Gulotta, Arizona state director for All Voting is Local. That is “insidious,” he adds.

Not the answer you're looking for? Browse other questions tagged united-states republican-party vote-by-mail .

30
Why don't all States switch to all postal voting?
20
Would mail-in voting disproportionately help Republicans?
9
Wouldn't it be beneficial for Democrats to support a bipartisan investigation into voter fraud allegations?
3
What, if anything, has been done to account for mail-in votes in 2020 exit poll data?
9
How many mail-in votes were disqualified for failing the signature match test at the US presidential elections in 2020?
3
Is there a correlation between a county's swing towards Democrats from 2004-2020 and increase in minority population?
0
What explains the Democratic shift among nonwhites since and relative to 2020's presidential election?
4
Does arresting specific types of people for voting illegally discourage those types of people from voting?