Recent polling on U.S. Balanced Budget (Amendment or other)?

A balanced budget for the federal government has long had strong popular support among the American people:

Has such public support continued past 2014? Can anyone cite more recent credible polling data on the subject?

Extra credit for identifying summaries of current US politician's statements on the subject.

Frankly such polls can be rather misleading because even in the heyday of the BBA the public had little idea how to actually get the budget in balance, e.g.

when Americans are asked specifically about the types of changes to government programs and tax rates required to balance the budget, polling support drops off fast.

For instance, a 1994 CBS/New York Times poll conducted just after the 1994 election found that 81 percent of Americans supported a balanced budget amendment. That number dropped to just 30 percent when they were informed that balancing the budget might entail cuts to Social Security, Medicare and education. [...]

"People don't realize what a balanced budget amendment would mean," says John Tures, a political scientist at LaGrange College in Georgia. "People have wildly distorted ideas about what we spend money on. They think all we have to do is cut foreign aid, which makes up a fraction of the bill, and we'll balance the budget."

While I could not find a recent poll on the BBA as such, there are more recent polls on the latter issue, whether Americans supports cuts on something/anything in the budget, such as this 2019 one: 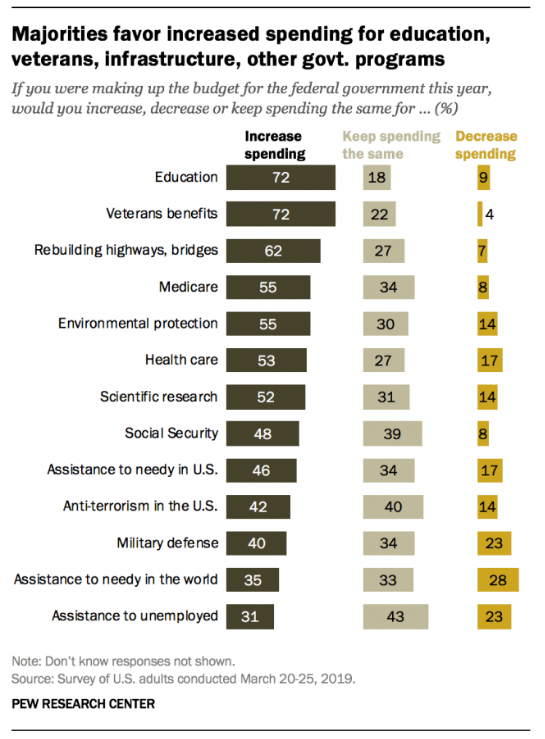 There are however older polls before the 1990s... and they paint a similar picture: the US public at large was willing to [risk] have another Great Depression rather than fund unemployment benefits... but, on the other hand, the public also preferred forgoing a tax cut to balance the budget. (No polling mentioned on a tax increase though.)

And Roper itself (from where you apparently took the poll from the Q) actually has a much better discussion on that:

Historically, the public has prioritized balancing the budget over implementing tax cuts, with some exceptions. Starting in 1946 and continuing through the 60's, Gallup asked a series of questions about whether the budget should be balanced before tax cuts put in place. In every case, a greater proportion of the public favored delaying tax cuts until the budget was balanced than wanted an immediate tax cut. However, the public was more split in a 1978 Gallup poll, when 43% said balancing the budget was more important, and 45% said cutting taxes. By a Knight Ridder poll in 1996, the public again preferred a balanced budget to a tax cut, 59% to 34%. In a 2002 CBS News survey, 70% chose a balanced federal budget over a tax cut. [...]

Though the public has often been willing to postpone or forego tax decreases to achieve a balanced budget, generally they prefer spending cuts, or spending cuts coupled with tax increases, to tax increases alone as an approach to balancing the budget. This pattern has held true from the early days of public opinion research. A 1940 Roper/Fortune survey asked those who said the budget should be balanced (76%) if this should be done by reducing expenditures or increasing taxes. When given two options with no specific examples, Americans much preferred the option of spending cuts to tax increases, 71% to 4%, with 15% volunteering that both approaches should be used. A 1984 Time/Yankelovich, Skelly & White Poll found 59% wanted a plan to reduce the deficit to include spending cuts only, 4% tax increases only, and 31% both. The most recent such question from CBS News/NYT in February 2014 shows attitudes have changed: 4% preferred only tax increases, 29% only spending cuts, and 65% both. However, questions about cutting spending on government programs in the abstract tend to overstate the public’s willingness to see particular programs cut. [...]

Not adding more historically data on the last issue, since that at least gets polled more frequently (as in 2019).

One thing that probably gets missed in such aggregate polling is perhaps who sees the deficit as a big problem at any given time... it's apparently mainly the supporters of the party not in [executive] power at that moment... at least in recent times. For example, comparing 2016 to 2019

the probability that Democrats viewed the deficit as “Very important” increased by nearly 12 percentage points (p < 0.001). In contrast, over the same span of time, Republicans exhibited a more than 13 percentage-point decrease in perceived deficit importance (p < 0.001). This pattern [...] strongly suggests partisan-motivated reasoning about the importance of addressing the federal deficit among both Democrats and Republicans.

Not the answer you're looking for? Browse other questions tagged united-states public-opinion budget .

5
What is the view of Joe Biden on having a balanced budget?

8
What prevents the U.S Congress from adopting a capital budget?
9
How does the discrepancy between exit polls and results in recent US elections compare to pre-electronic machine margins?
1
What did the Republican leadership do (or call for) after the OPM breach?
9
Criticism of Trump's drawdown of forces in Afghanistan, what would be the alternatives?
8
Why is Republican targeted messaging around socialism effective among immigrants from socialist or formerly socialist countries?
19
How can the U.S. government ensure that the black budget is spent appropriately?
1
Did congress increase the U.S. Capitol Police budget by $2 Billion?
1
Balanced budget (amendments) in U.S. States