How do vaccination rates compare between Israelis vs Palestinians in Israel?

Much has been made of the high and effective levels of vaccination in Israel - which has been seen as a lead country in the battle against Covid.

How do these levels vary between Israelis and Palestinians in Israel? How have the vaccines been distributed? And if Palestinians have received lower levels, how has this affected the development of herd immunity, among peoples who to some extent, at least, live in the same community.

Arab Israelis have lower vaccination rates, but it's not due to lack of access. The government is trying to convince the Arab population to get vaccinated but many of them simply don't want to and don't believe in the vaccinations.

The sickness rates and mortality rates in the Arab society in Israel are worse than in the general population. This is not only due to lack of people vaccinating, but also because they live in more crowded villages and have more mass gatherings (for example in weddings).

Haaretz's COVID in Israel: Vaccination Rate Low, Infection High Among Arabs, and Officials Are at a Loss has the following figure showing Covid cases by demographic in the fourth week of September 2021: 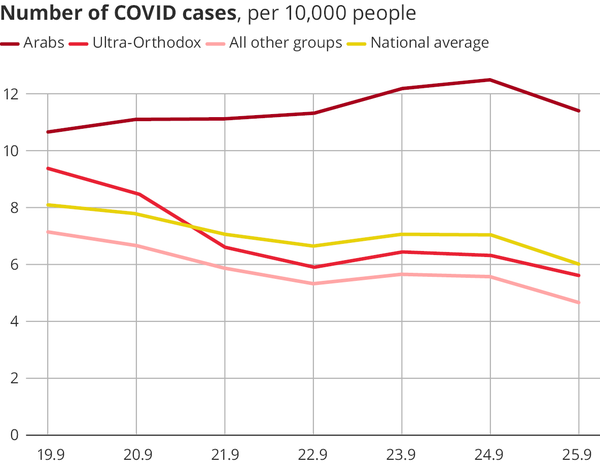 Virtually all the young people (under 60) with severe cases are not vaccinated at all, or were vaccinated more than 6 months ago and the effect has weaned off.

First note that despite what the UN Special Rapporteurs (for Palestine) have called for, [in March at least] Israel had refused responsibility for vaccinating Palestinians who are not Israeli citizens, invoking the Oslo accords:

The United Nations (UN) human rights body has released a statement saying it's Israel's responsibility to provide equitable access to Covid-19 vaccines for Palestinians in Gaza and the West Bank.

The body says differential access is "morally and legally" unacceptable under international law laid out in the Geneva Conventions on the regulation of occupied territories.

But Israeli health minister, Yuli Edelstein, told the BBC: "We can also look into the so-called Oslo agreements where it says loud and clear that the Palestinians have to take care of their own health."

The Oslo accords - which Israel signed with the Palestine Liberation Organisation - give the Palestinian Authority oversight of public health under the principles of self-determination.

So Israel's own rapid vaccination programme did not extend to non-Israeli Palestinians at this point in time, at least.

By mid-June 55% of Israelis had received both doses of the vaccine, while only 30% of Palestinians in the occupied West Bank and Gaza had received one dose. There's also a significant difference between Gaza and the West Bank. By June only 5% in Gaza had been vaccinated. By September, 37% of Palestinians in the West Bank had received one dose, but only 18% in Gaza. In the latter area, there was apparently significant vaccine skepticism; the Hamas de facto government had to introduce a vaccine mandate. And according to the NYT, Israel did vaccinate [at least some] non-citizen Palestinians who were working in Israel:

Last spring, Israel gave vaccines to more than 100,000 Palestinians who work in Israel but not to the millions of other Palestinians in the West Bank and Gaza.

Not the answer you're looking for? Browse other questions tagged covid-19 israel demographics palestine vaccine .

6
Why do some claim that the Oslo agreements between Israel and the Palestinians have failed?
4
How does Israel's level of corruption compare that of the West?
7
Libertarians and vaccines
4
Does the World Health Organization have the power to impose sanctions?
6
Has the WHO said anything about travel restrictions since the end of February?
6
How do crime rates compare between Black and White populations of similar economic status, particularly for those below the poverty line?
17
Does the BDS movement advocate sanctions against the United States?
0
How has the Israeli right responded to Trump's failure to condemn Nazis?
29
Why are Democrats fighting so hard to vaccinate the reluctant?