Who are the White House staff member or members that are cutting off the President from taking questions?

Apparently President Biden is routinely cut off and prevented from taking questions from reporters by the White House staff who are never identified in these reports. Most recently this occurred during the failed negotiations to approve a 2022 budget on October 1, 2021. Last week a similar thing happened at the joint press conference with Boris Johnson in which Johnson took two questions, then Biden started to respond to a question and could be heard to say "violence is not justified," but before he could say more, unnamed "aides" shouted over him and ordered the press out of the room. This incident was serious enough that the White House press corp filed a formal complaint with the White House press secretary. 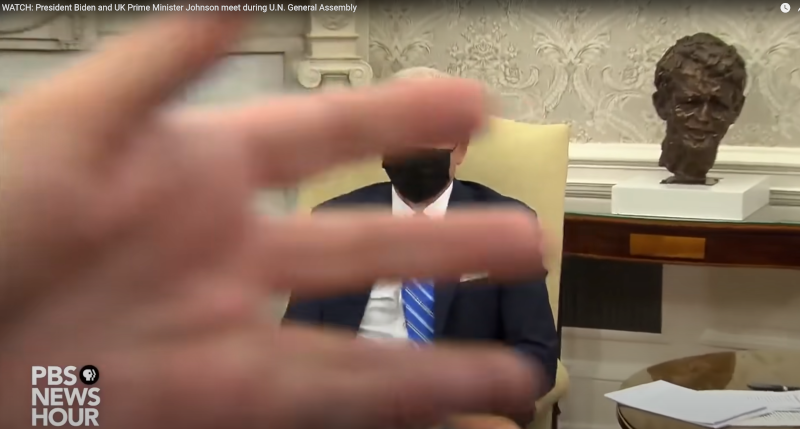 The right-wing US press (that you've linked to) indeed interpreted the way the Biden-Johnson UN presser ended as Biden being cut off... but you can clearly hear in the video that the shouts from the staff started while Johnson was still speaking. And the British (also right-wing) press e.g. The Telegraph, The Sun thought/headlined that it was Johnson who was ('aggressively' according to the The Telegraph and 'mid-sentence' according to The Sun) being interrupted by Biden's staff.

It's also debatable that Biden himself was too keen to continue that presser... since just had to riff at length (in response to a question) about an incident involving a US diplomatic staff spouse hitting someone with a car in the UK. And even before that question was put to him (by a journalist from The Sun) Biden tried to (half-jokingly) convince that journalist to ask Johnson a question instead... Maybe Biden and his staff even more so thought that presser was going downhill for him at that point; the main recent topics he probably wanted to emphasize (AUKUS etc.) having had already been touched. The last question on the importance the Belfast agreement/protocol that both Biden and Johnson had to answer was kind of 'old news' as well. And by the way, Johnson himself had said before that was asked "we're going to take one more question", which is usually said when one wants to wrap things up.

I would grant however that the White House transcript ends with

Q: What’s your response to the situation on the border, Mr. President?

Frankly for me even the question that Biden was answering was inaudible due to the staff shouting thank-you.

When Biden really thought he had more stuff to say in the past in such conference-ending moments, he wasn't too hesitant to go back and make himself heard... in way that was also considered aggressive ("snapping") by some. Perhaps here it wasn't the case that wanted to add much more than that?

Also based on a different account (than the one linked by the OP) the complaint appears to have been over the proportion of British vs American journalists that asked questions:

The editorial component of the US pool lodged a formal complaint with Jen Psaki after no American reporters were recognized for questions in the president’s Oval Office this evening. They went into her office and asked for a press conference as a compensation for what happened, but Psaki responded by saying that Biden takes questions several times a week.

At least based on the video that happened because it was Boris Johnson who picked whom to answer questions. I don't know if this is standard protocol when a foreign leader is in the White House; it would make an interesting separate question.

Based on what was said between WHCA President Steven Portnoy and Psaki at a subsequent presser of Psaki, it seems that the WHCA feels that Biden isn't personally answering enough questions... which Psaki denied was the case (as you might have expected.) There was also a more pointed question by Portnoy whether Biden "felt upstaged" by Johnson during that joint event. There was seemingly no public question about the behavior of the staff though.

As this bit got "moved to chat" from comments: it's no secret however that Biden's "communications shop" advises him to not take questions much:

“Look, I’m sorry. This is the last question I’ll take,” Biden said. “I’m really going to be in trouble.”

“That is not something we recommend,” Psaki said. “In fact, a lot of times we say `Don't take questions.’”

But, she conceded, “He’s going to do what he wants to do, because he’s the president of the United States.

That was from an interview with Psaki in May.

The exact names of people who do thank-you interference doesn't seem to have been made public even in the right-wing press though.

But not all of these have been shutdowns via staff interference, e.g. in August during a FEMA briefing regarding Hurricane Ida:

PRESIDENT JOE BIDEN: I'm not supposed to take any questions, but go ahead.

BIDEN: I’m not going to answer on Afghanistan now.

See also, related Q on the number of press conferences Biden himself gave.

Not the answer you're looking for? Browse other questions tagged united-states media joe-biden boris-johnson .

18
Has Biden held far fewer press interviews than Obama or Trump in an equivalent time period?

9
Consequences for ethics violations by President and White House staff
3
Has Priebus committed a crime by speaking to the FBI & breaching the 2009 policy memo from Eric Holder?
5
Diplomacy archival - Quest for official 2002 pictures - “first Taiwanese government official since 1979 to visit White House”
3
Is there precedent for a foreign government official delivering a statement from the White House and can they do it in the WH briefing room?
9
Can a Congress member allow a non-member to ask questions / argue during a testimony before the Congress?
8
Who is "Destiny Pictures", and has there been anything similar to this video before?
9
What does the White House chief of staff do?
7
Have OANN or Newsmax asked any questions (thus far) at the the press conferences of the Biden White House?