Just what does a $3.5 trillion spending package mean?

We are now two days into October 2021; and two days into the new federal fiscal year, FY2022. It seems like a good time to take stock.

We've got the President's complete, authentic online version of the FY2022 budget available digitally from the OMB. And the government is temporarily funded (till December 3rd). So the shutdown has been averted for now. And the usdebtclock is still ticking away.

(It appears that "OFFICIAL" means these two figures are sourced from the U.S. Treasury. Are these annualized figures as opposed to the "actual" figures listed on the same page? Surely we haven't spent trillions of dollars in the first few days of the fiscal year.)

But there are Democrats in Congress still arguing about a 3.5 trillion dollar package! So my question is, at a high level, what does that $3.5T figure mean? ( Let's assume the package gets passed through both houses and signed by the President.)

I've asked for a factual response to the seemingly simple question about the fiscal topics so much in the political news recently. I can certainly up the ante with a bounty on the question to gain more eyes on the subject. But, before I do, I want to establish the ground rules...

@Fizz's comment that "only a few people understand how that's calculated" may be true, it's certainly not an acceptable answer, but it well states the problem. But without proof that such rare people really understand it and have the authority to make fiscal claims for the US, a reasonable but unproven assumption would be that default has already occurred. A classic default on the obligations of the US is clearly within reasonable possibility in the immediate future.

I'm not saying the posit of default is proper but trying to apply the scientific method. A hypothesis that should in principle be disprovable with factual evidence. Answers to the above questions, supported with facts, might prove a foundation for proving my broader hypothesis wrong.

Senate Democrats have released a memorandum explaining the $3.5 trillion framework.

To provide some background on how the topline number came about, the memorandum sets forth the breakdown of the $3.5 trillion spending:

Adding these instructions up gives a grand total of $3.5485 trillion.

It's worth noting that the $3.5 trillion number only reflects the "level of new investments" and "does not represent the net budgetary impact" as offsets are not accounted for.

To answer your questions,

Finally, the whole memorandum is worth a read.

When someone talks about the cost of a bill, they are almost always talking about the Congressional Budget Office's (CBO) 10-year cost projection number. The CBO is a non-partisan office that attempts to provide an impartial estimate of the cost of a bill. So the $3.5 T number reflects additional spending beyond the current budget but accumulated over 10 years.

In a perfect world where no one was trying to game the system, this would mean something like $300 B in additional FY2022 spending, slowly increasing to $400 B in FY2031 with the $3.5 T total cost. In the real world, however, politicians writing bills on both sides of the aisle know that the CBO uses a 10 year horizon so they game the system. They introduce new spending (remember that tax cuts are spending too) that don't actually start for 5 years or that phase in over many years in order to game the result. From the CBO's cost projection standpoint, it doesn't matter if some cost explodes in year 11 so long as it doesn't affect the 10 year budget. So practically, it is likely that a decent amount of the cost of a bill would end up backloaded into the end of the 10 year period in order to keep the CBO's cost estimate down.

The Democratic leadership has stated that the $3.5 T bill will be mostly if not fully paid for by various revenue raisers (i.e. additional taxes and fees). If that's the case, there would be 0 net impact to the deficit. Practically, I think it's reasonable to expect that it will be much easier to get politicians to agree to spend $3.5 T than to raise $3.5 T in taxes so "mostly" is likely to get stretched to the breaking point. And it is likely to expect a similar amount of gamesmanship in the revenue side of the bill. For example, when Obamacare was passed, one of the provisions that was included to raise revenue was the CLASS Act-- a long-term care insurance program. Since people would pay voluntary premiums during the 10 year CBO period and (primarily) file claims after the 10 year window, it looked like this raised a significant amount of revenue to offset Obamacare spending. Of course, that ignored the fact that all that revenue (plus some) would need to get saved in order to pay the claims that would be filed subsequently.

Since there is no bill to examine at the moment, no one can reasonably estimate how the CBO would score overall impact to the deficit. And no one can reasonably estimate what the impact would be if the estimate wasn't tied to the CBO's rules. No one can guess how long it would take to pay off the spending that increased the deficit because no one knows how much such spending there will be.

This isn't official, I think the implication is that there's no offsetting revenue in this draft concurrent resolution!

Here is a key screen shot: 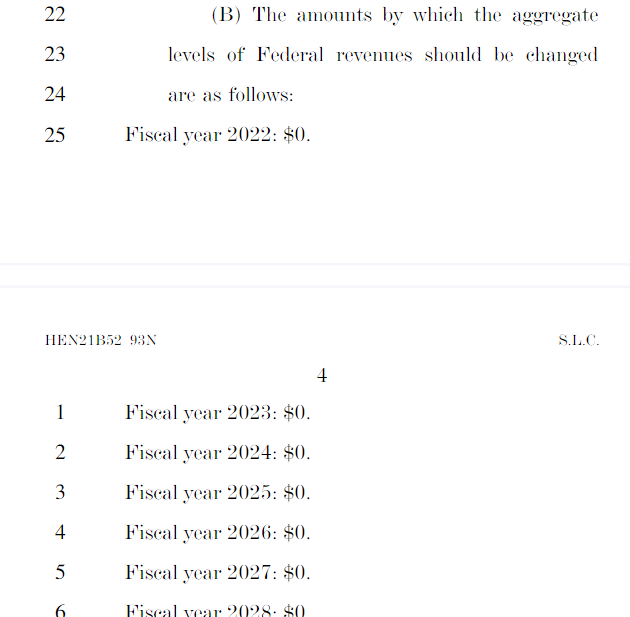 From Scribd has a snapshot of the Senate blueprint at https://www.scribd.com/document/519447809/HEN21B52#from_embed

I've found some non-official budget models that seem to provide some interesting content. For example, Wharton (business school?) at UPenn has an analysis of the effects of the president's 2022 Budget Plan which includes the American Families Plan and American Jobs Plan. Here is the key table: 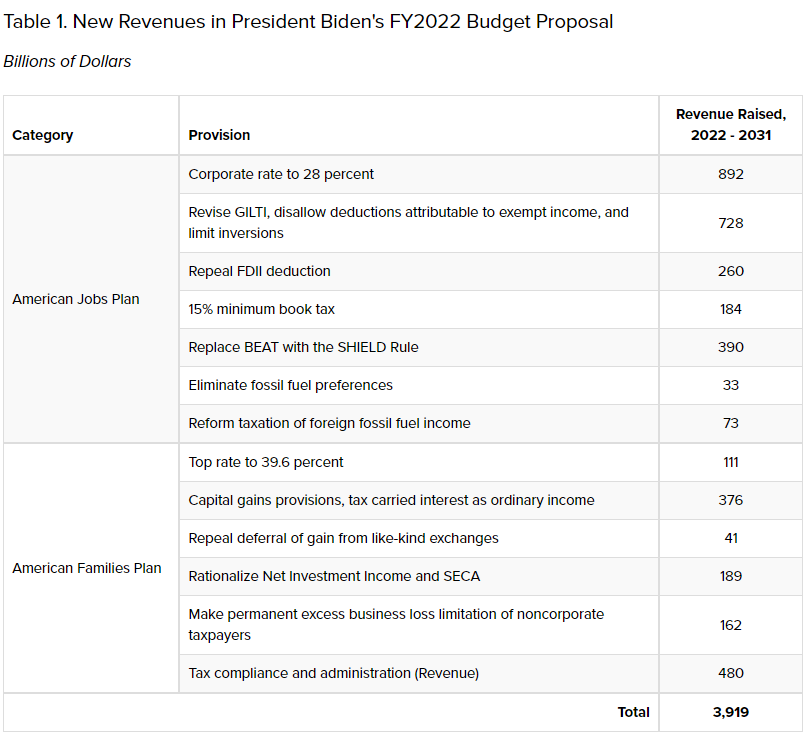 9
Could raising the tax on the wealthy, without cutting spending, balance the federal budget in the US?
24
How would the trillion-dollar coin save the United States' economy?
13
Where did all this deficit come from?
5
Is there legal recourse for creditors if Treasury defaults on any (not necessarily all) of its debts?
4
Did Reagan use public spending to make the GDP grow?
10
The law on addressees of U.S. senators' resignations
4
Is it possible for an EU country to incorrectly report annual deficit in order to obey Maastricht Treaty threshold?
8
The US has done lots of Quantitative Easing, so why does it not do the same for its debt?
6
Can Congress really raise or suspend the debt ceiling through budget reconciliation with a simple majority in the Senate?