How big a short term debt ceiling increase is McConnell agreeing to?

Senate Republicans have thus far refused to raise the debt ceiling, which needs to be raised by October 18 to prevent the US Government from defaulting on the national debt. They have been insisting that Senate Democrats should raise it on their own through the Budget Reconciliation process, which allows budget-related bills to be passed with a simple majority rather than a 60-vote supermajority. But now they seem to have budged; Senate Minority Leader Mitch McConnell just issued a statement offering to allow Democrats to pass a short-term debt-ceiling increase through regular order:

We have already made it clear we would assist in expediting the 304 reconciliation process for standalone debt limit legislation. To protect the American people from a near-term Democrat-created crisis, we will also allow Democrats to use normal procedures to pass an emergency debt limit extension at a fixed dollar amount to cover current spending levels into December. This will moot Democrats’ excuses about the time crunch they created and give the unified Democratic government more than enough time to pass standalone debt limit legislation through reconciliation.

My question is, how big a debt ceiling increase is McConnell agreeing to? What dollar amount would be sufficient to cover all federal borrowing, at current spending and taxing levels, into December?

And how does this compare to the dollar amounts by which the debt ceiling has been raised in recent years? I’m aware that it’s often been suspended and then auto-adjusted upwards rather than raised, but I’m talking about the occasions in which it was actually raised by Congress.

According to the deal announced between Schumer and McConnel, the sum is now $480 billion.

The agreement, according to people familiar with the deal, allows the debt limit to increase by $480 billion, a sum the Treasury Department estimates will allow it to pay bills until Dec. 3. The current national debt is about $28.4 trillion and would be permitted to rise to about $28.8 trillion under the deal.

It's difficult to make a numerical comparision with the years right before, becuase the ceiling was merely suspended rather than raised since 2018 (first for one year in 2018, then for two years in 2019). But this (rather low quality) graph may help to some extent: 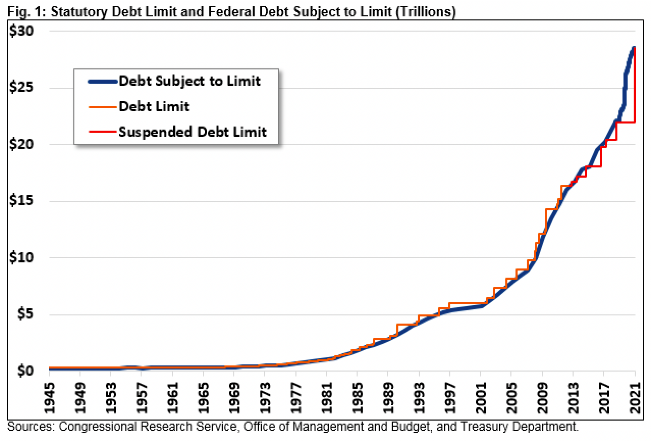 What appears obvious from the graph is that suspensions (i.e. post-facto raises) have become the norm in the last decade, whereas a decade before the limit was usually raised preemptively to stay above the actual debt.

Anyway, the deficits are expected to be on the order of one trillion per year for the next decade, so on average that's about how much the ceiling should be raised annually, unless resorting to auto-raise suspension tricks. That actually roughly corresponds to what happened now, as the suspension expired at the end of July and they raised the limit by about half a trillion for Aug 1 to Dec 3 (i.e. ~4 months).

Hard to say precisely, because they are still haggling over the amount. A Hill piece published about 3 hours ago (as I'm writing this) mentioned $300 billion as the Republican offer citing Sen. Kevin Cramer (R-N.D.).

Interestingly, this seems to match a Committee for a Responsible Federal Budget estimate issued in March for FY 2021:

Even with exceptionally low interest rates, the federal government is projected to spend just over $300 billion on net interest payments in fiscal year 2021.

As for your other question (in comments), what the Democrats are asking for... at least a week ago (last Thu) Yellen was simply calling for the debt limit to be abolished altogether.

Treasury Secretary Janet Yellen said Thursday [9/30] she supports abolishing the federal debt limit, calling it a “very destructive” threat to the full faith and credit of the U.S

In congressional testimony, Yellen argued it made no sense to limit the Treasury's ability to pay bills already approved by Congress and the president with an arbitrary cap on how much debt it can issue.

“When Congress legislates expenditures and puts in place tax policy that determines taxes, those are the crucial decisions Congress is making,” Yellen said during a hearing before the House Financial Services Committee, where she appeared beside Federal Reserve Chair Jerome Powell.

“And, if to finance those spending and tax decisions, it's necessary to issue additional debt, I believe it's very destructive to the president and myself, the Treasury secretary, in the situation where we might be unable to pay the bills that result from those past decisions.”

"It should be bipartisan in recognition of the fact that both Republican administrations and congresses and Democratic ones have run budget deficits for most of the post-[World War II] period with only a few years serving as an exception," Yellen said.

"That requires on a regular basis raising the debt ceiling," she continued. "The need to do so has nothing to do with future spending or tax plans.

I don't know where she stands more recently with respect to what's needed till Dec. If you have the patience, you could watch the 2-hour testimony and see if the issue how much extra debt is needed till Dec was even raised then.

The only other more concrete figure I found she gave was some a $150 billion amount that was due on Oct 1st, but that's already in the past now:

Yellen has called Oct. 1 a critical date for U.S. government cash flows, because of some $150 billion in payments due on the first day of the 2022 fiscal year, including some investments in military pension programs.

Not the answer you're looking for? Browse other questions tagged united-states congress senate statistics debt .

9
Could raising the tax on the wealthy, without cutting spending, balance the federal budget in the US?
6
Does the new Budget Deal avert the December 11, 2015, Government Shutdown?
8
Does the US Senate still have the option to pass some form of healthcare bill through the budget reconciliation, during this fiscal year?
5
Trump's recent siding with the democrats on 3 months debt extension - trying to understand a few things
13
Has any recent Republican legislation been blocked solely by the filibuster?
6
Can Congress really raise or suspend the debt ceiling through budget reconciliation with a simple majority in the Senate?
4
What danger(s) does Chuck Schumer see in using reconciliation to increase debt limit?
4
Just what does a $3.5 trillion spending package mean?
5
What new reconciliation powers has Schumer obtained?
1
Politico's "Sinema rakes in Pharma and finance cash..." A salient issue and an exceptional pattern of donations, or just cherry picking of statistics?