When does a national debt become too much?

I've always heard that it's good for countries to have debt to spark growth, but at what point does a national debt become so big that it becomes a problem?

Uncontroversially: when you stop being able to raise new debt.

More debatable: somewhere on the path to the above point, when e.g. your borrowing costs raise substantially be they in absolute terms (amount of interest as fraction of GDP or government revenues) or in relative terms, e.g. a sharp increase in bond yields. Due to various constraints on the central bank, even the latter can result in more inflation, possibly affecting the economy as a whole.

As one Wold Bank paper phrases the latter issue:

The most basic cost of public debt is the servicing cost—the interest to be paid to creditors—which may be compared with the rate of return on the spending financed by debt to provide the simplest guide to whether public borrowing is worthwhile. An important argument against heavy borrowing, which may outweigh the benefits of borrowing in some countries, is that rollover costs—the costs of refinancing when debt matures—can increase sharply during periods of financial stress and even trigger a financial crisis. High debt can also limit the feasible size and effectiveness of fiscal stimulus during downturns. Finally, high debt can constrain growth over the long term by crowding out productivity-enhancing private investment.

The amount of net interest is presently not a real issue in the US, but it's (future) projected figures under the present tax and spending constraints are what drives the latter discussion: 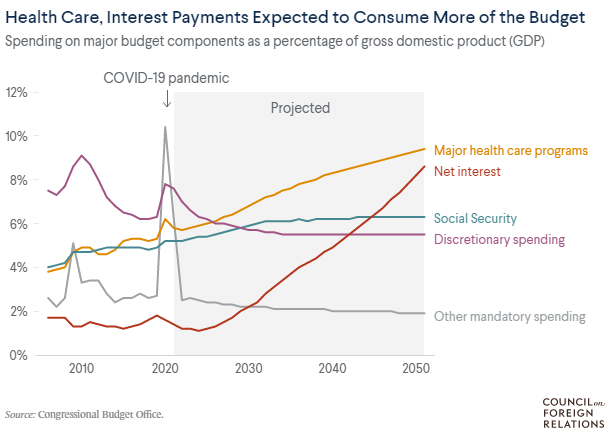 The standard textbook account of Reaganomics is that its tax cuts failed to trigger enough "trickle down" economic growth and associated government revenue growth so debt grew during that era. However, the outlays on interst only reached something like 3% of GDP even during that era. The combination of (pre-Covid) Trump tax cuts and Covid stimulus may put the US outside of the charted historical parameters, under current projections.

For countries other than the USA, the discussion is more complicated because a lot of the debt may be in a foreign currency that they have no control over.

The effect of debt on inflation (via yeilds) is disccussed in more detail in a Fed paper, but the conclusion there is non-commital in quantitative terms:

there is no way of knowing beforehand just how large the national debt can get before inflation becomes a concern.

Likewise an S&P article describes debt as potential "kryptonite" for inflation, but says no effects have been observed in the US so far. Some experts speculate that any post-Covid inflation will be a temporary spurt (as in the Fed paper above) while others (cited in the S&P article) are more gloomy, suggesting that the US may experience something like Japan's decade of lost growth if debt is not addressed forcefully.

20
How did the US bring down federal debt ratio after World War II?

11
What is the debt ceiling and what happens if we reach it?
104
Why is Greece's debt considered a problem but not US debt, which is much larger?
20
What are the overall aims of UK austerity, If the UK national debt has nearly doubled since it started?
8
The US has done lots of Quantitative Easing, so why does it not do the same for its debt?
3
Can a country sell part of its land to pay off huge national debt?
5
Why does the U.S. keep pushing "the debt trap" narrative in Africa when China is not the major source of debt distress in Africa?
49
What are the downsides of being a debt-free country (no foreign national debt)?
39
How does debt-trap diplomacy work?