Politico's "Sinema rakes in Pharma and finance cash..." A salient issue and an exceptional pattern of donations, or just cherry picking of statistics?

Sen. Kyrsten Sinema (D-Ariz.) raised more campaign money in the last three months than in any quarter since she became a senator. And she hit that $1.1 million haul with a big assist from the pharmaceutical and financial industries, whose political action committees and top executives stuffed her coffers in the middle of negotiations on Democrats’ massive infrastructure and social spending bills.

Sinema has emerged as a key player in those negotiations, with the reconciliation bill needing support from all 50 Democratic senators...

As those objections have been registered, Sinema’s Senate campaign has cashed checks from industries facing potential losses or other disruptions. She received $27,800 from PACs of pharmaceutical companies from July through September — up from $5,000 in the three months prior, according to her campaign finance filings.

Little of the $1.1 million Sinema raised came from her constituents. Nearly 90 percent of Sinema’s cash from individual contributors came from outside Arizona.

Her individual donors also included a who’s who of powerful people in the pharmaceutical industry. Top donors included the pharma giant Gilead’s CEO, Daniel O’Day, who gave $5,000 this past quarter. Another $2,900 came in from Eli Lilly CEO David Ricks. The executive chair of Merck’s board, Kenneth C. Frazier, also gave $2,900, as did the chair and CEO of Bristol Myers Squibb, Giovanni Caforio.

Sinema is not up for reelection until 2024. But her campaign account has been a landing spot for donors nonetheless. Sinema never raised more than $700,000 in a quarter during the last Congress, but she has now topped $1 million twice in the last two quarters of 2021.

The Winklevoss twins, the American investors who battled with Mark Zuckerberg over the founding of Facebook and gained wider fame from the movie “The Social Network,” both maxed out to Sinema this quarter. The brothers are involved in cryptocurrency, a field that falls under the jurisdiction of the Senate Banking Financial Institutions and Consumer Protection Subcommittee, on which Sinema sits.

Those with interest in the battle over potential tobacco and nicotine taxes from Congress were generous, too. John Hoel, an in-house lobbyist for Altria Client Services, a major tobacco company, gave $500. The Cigar Association of America’s PAC donated $1,000. Additionally, a PAC for the National Association of Truckstop Operators, a group with ties to big tobacco companies which has fought the potential taxes, gave Sinema $5,000.

A cursory read could give an inexperienced reader the impression that these statistics prove that Sinema has been singled out by companies and their executives as a target for "effective contributions" and without saying so explicitly, could promote the idea that Sinema's voting in both in committee and in the full Senate is perceived by those donors as being more influenceable than average.

In general politicians receive donations from companies and executives regularly. That this Politico article has singled out Sinema suggest there's something anomalous here.

But is there, really?

Question: Politico's "Sinema rakes in Pharma and finance cash..." Does this article raise a salient issue and highlight an exceptional pattern of donations, or is it just just cherry picking statistics to try to show a pattern that really isn't there?

From The Mercury News' October 21, 2021 5 veterans quit advising Sinema, calling her an obstruction is this statement from the resigning advisors, which seems to echo the same sentiment (without supporting it) that Sinema's actions are "for sale":

“You have become one of the principal obstacles to progress, answering to big donors rather than your own people,” the veterans wrote. “We shouldn’t have to buy representation from you, and your failure to stand by your people and see their urgent needs is alarming.”

“We do not know who has your ear, but it clearly isn’t us or your constituents,” they added.

The 90% proportion from out of state, if it holds all the way to the election, would be in the tail of the distribution, but not an outlier looking this data: 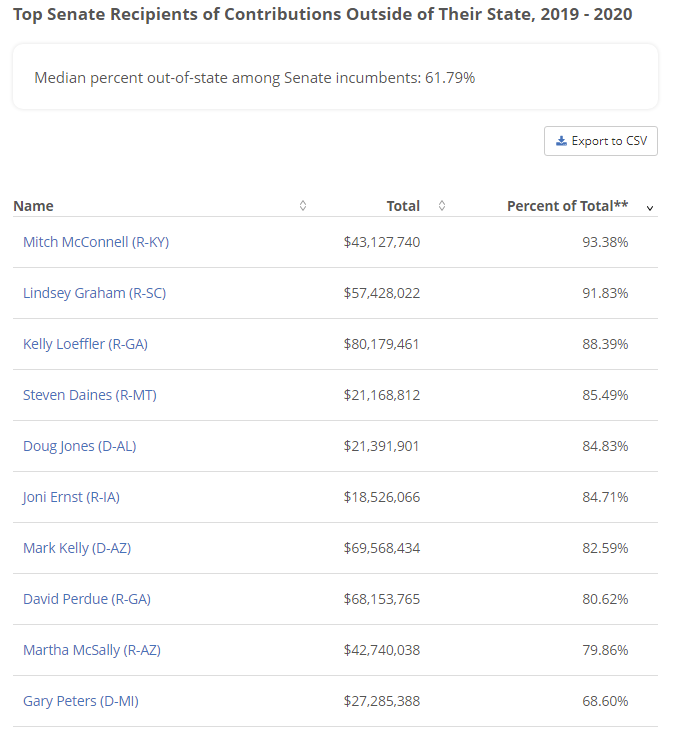 As you can tell, these totals are in the $20-$70 million range, so it's hard to say how unbalancing $1.1 million is going to be in that regard, unless you know how much she usually rakes.

Likewise, it's not hard to find top individual recipients for Pharma money, but such statistics I could find involve an even longer time frame (than one election cycle).

There is one KHN article (from end of May) which seems to be more or less what inspired the rest of the coverage on Sinema; this piece does have a comparison on shorter frame and it concludes Sinema is an outlier:

Sinema is a first-term Democrat from Arizona but has nonetheless emerged as a pharma favorite in Congress [...]

For the 2019-20 election cycle through March, political action committees run by employees of drug companies and their trade groups gave her $98,500 in campaign funds, Kaiser Health News’ Pharma Cash to Congress database shows.

That stands out in a Congress in which a third of the members got no pharma cash for the period and half of those who did got $10,000 or less. The contributions give companies a chance to cultivate Sinema as she restocks from a brutal 2018 election victory that cost nearly $25 million.

That's not a lot in relation to her total campaign expenditure though.

KHN also gives a bit of insight in her legislative history while she was in the House or Representatives, as clue why Sinema may be subject of such hopes/funds from pharma:

In 2017 Sinema introduced a House bill, strongly supported by the Biotechnology Innovation Organization trade group, that would have eased financial regulation on publicly traded biotech firms with little revenue. The measure has not become law, but two weeks later BIO named Sinema “Legislator of the Year,” calling her a “stalwart advocate” for life sciences jobs.

Not the answer you're looking for? Browse other questions tagged united-states senate campaign-finance .

87
Why is Elizabeth Warren's Native American ancestry a political issue?