Why are Spaniards disproportionately very dissatisfied with Spain's political system?

The trends discussed in Pew Research's recent study Citizens in Advanced Economies Want Significant Changes to Their Political Systems was of no surprise to me, except Spain stands out in an interesting way. The data suggests those in Spain who are dissatisfied with Spain's political system are really dissatisfied, even when compared to those who are dissatisfied in other countries.

I find this interesting because I hear little about Spain in the news. Even as far as Europe is concerned, I hear much about dissent, division, dissatisfaction, or turmoil in the United Kingdom, Greece, France, and Italy. I even hear more about Poland, Hungary, and Germany than I do about Spain. Yet, when it comes to extreme dissatisfaction (dark green bar in the illustration), Spain leads every other country by a significant percentage, including the U.S., which has reached a record-high level of political division. 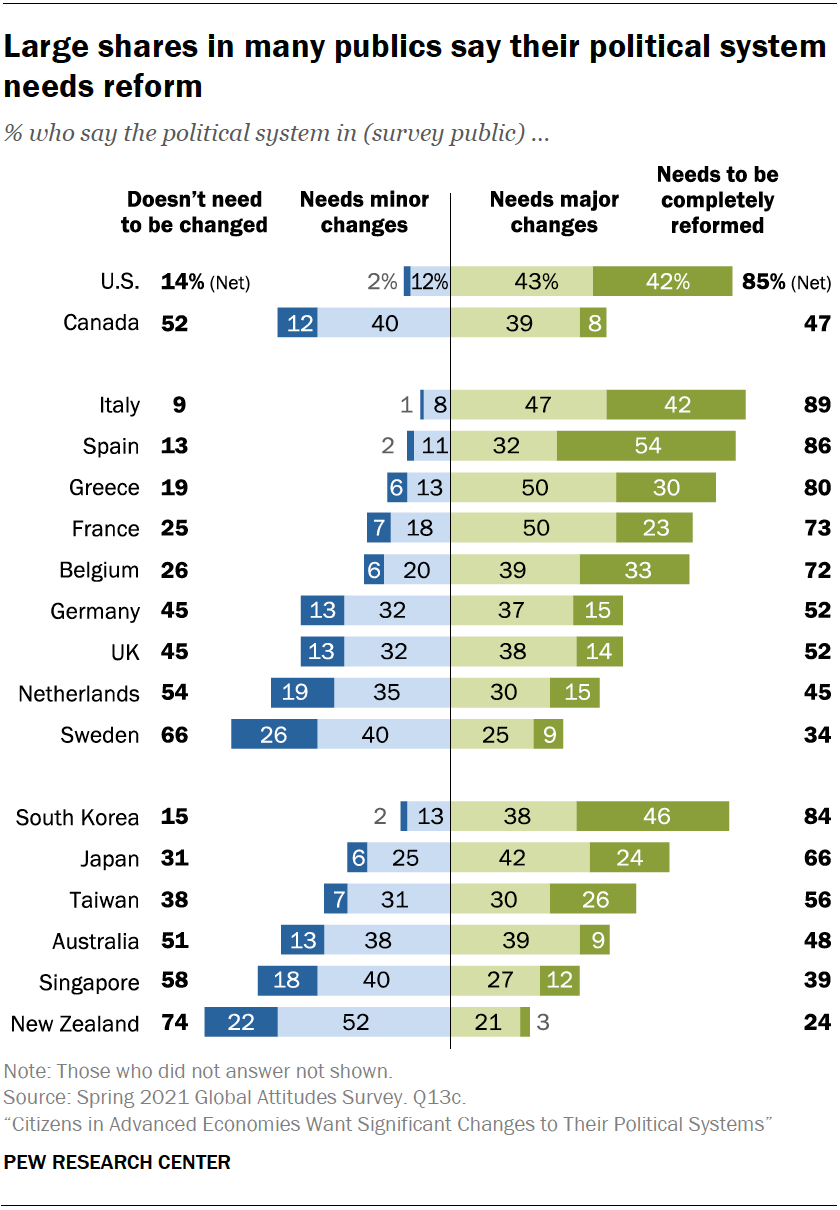 José Manuel Villarejo has been the most mysterious and vilified person in Spain. Now he is due to have his day in court.

The 70-year-old former policeman is widely believed to have been at the center of a deep-state apparatus stretching back decades whose tentacles reached into the media, judiciary, big business and politics. His activities are believed to have tarnished the reputations of an array of ministers, business leaders, senior figures in the judiciary, and even the monarchy.

Prosecutors have probed 30 separate lines of investigation related to his activities and he is accused of a barrage of crimes ranging from bribery and extortion to forgery and influence peddling. The court will try him over the next few months for a handful of the cases in which he has been implicated, along with 32 other defendants. If found guilty, he could face a prison term of over 50 years.

As a Spaniard, and one quite into political and economical issues, Spain's political system is broken from the bone. It was created in 1978 with our Constitution after the death of Francisco Franco, and people call it a democracy although it is far from it.

Why? In a representative democracy, you have to elect and vote for your local representatives AND the president. Here, until recently, we only had two main political parties, like in the US, but there was a key difference. Those two parties were ruled from Madrid, and your local representatives are selected by the central committee of the party. That means you can only vote for one party or the other one. Then, the president is elected by Congress, so when you vote, you are actually also voting for your president. Then, the party with the most Congressmen (which all obey the parties wishes, they don't vote independently because if they do they won't be able to be elected next term) also has the ability to choose the government body of the judicial system, including the judges that are suppose to judge the politicians themselves. So it is pretty corrupt altogether.

This doesn't result in a democracy, but in a system where the parties divide the pie and the government has absolute and total power (like Franco had) and then the next party has it. Real opposition to the government is impossible, because the president controls the military, the judges (he also elects the Attorney General, our actual president elected his ex-secretary of justice as AG and when asked about it said "Who elects the AG... Yeah, so that's that"), the senate and parliament, and total control over his party, meaning he can also manage local regional governments and townhalls with impunity. Then, the next party comes and has absolutely the same powers, it is called a partitocracy; but not a democracy.

And that is just talking about the structure of the central government, then we have another local 16 parliaments, townhalls, something we called "Diputaciones" which we have 52 of... It is just a big mess.

Lastly, we have a pretty divided and radical society, we Spaniards are generally the most passionate people on the planet about every issue. America looks like child's play compared to us. So, everyone is usually not happy about anything because they always feel like they are being ripped off in some way in their lives.

You can add political instability. There have been 4 general elections in 6 years. The two main traditional parties have lost significant shares compared to the new (more or less populist) parties that have arisen in the past decade, but alliances insofar have been pretty short lived. The current government, although it's a coalition, it's a minority coalition and its dialogue (or perhaps unofficial support) from the regional parties esp. the Catalan open it to accusations of treason from the right-wing parties (which themselves are more fragmented than the left).

So I suspect that if you ask those 89% who want specific changes to the political system they actually want, you'd probably not see much consensus, besides the usual stuff like less corruption etc. Speaking of which, the monarchy itself has been involved in such scandals (and not just politicians/parties), which probably didn't do much good to public confidence; in a 2017 Special Eurobarometer 94% of Spaniards said that corruption is widespread in their country (only Greece was higher with 96%).

Also, the justice system is somewhat more politicized in Spain than in other EU countries; this is actually reflected in the public perception, ranking it 19 of the EU's 27 in 2020 on that angle. Reforms of the judiciary have been mired in the general political deadlock.

ohwilleke's answer does a good job of touching on a lot of the various issues that come into play here, but I think it's worth expanding more on the economic issues in particular.

Spain has been suffering from major economic issues continuously since 2008. The unemployment rates in Spain have been particularly exceptional for more than a decade now. Even before Covid hit, Spain's unemployment rate was around 14%. And that was the best it had been since 2008. To demonstrate just how exceptional that is, here's a graph showing all of the OECD countries. The blue line is Spain, the red one is the Euro area as a whole, the black one is the OECD as a whole, and the purple one is the United States. The line that is above Spain is Greece. 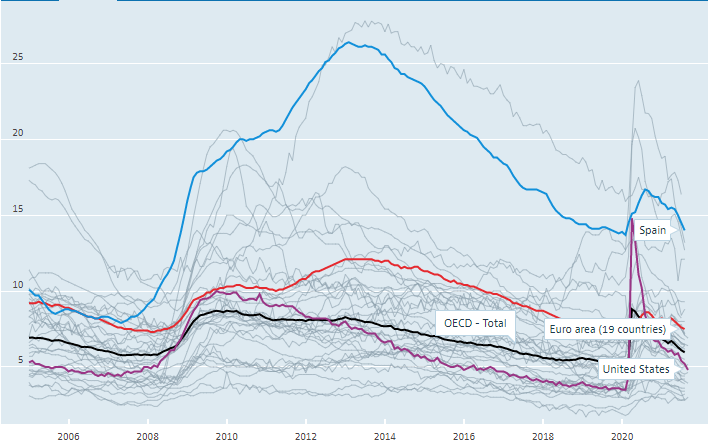 As you can see from the graph, the best time in Spain since 2008 was similar to what the U.S. had for a couple of months during the height of the Covid shutdowns last year when a large percentage of the population was literally ordered to not work.

It's unsurprising that with such high unemployment, productivity per capita and household disposable income would also lag well behind other European countries. 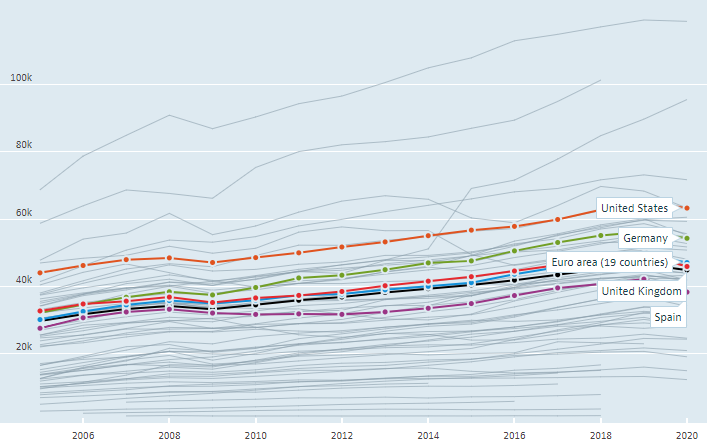 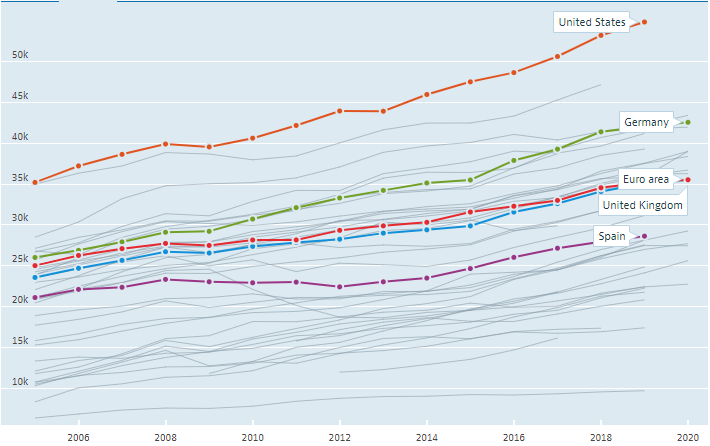 It's not at all surprising that unemployment levels that have been between 14% and 27% for 13 years running and the associated economic lag behind its neighbors would lead to very high levels of general dissatisfaction with the status quo. As such, it's quite understandable why Spain would have quite high levels of dissatisfaction with their current political system.

Well, I am Spanish so I have an insider opinion, but I live in Germany, have lived in Norway and my wife is Belarusian so I can compare.

Satisfaction and (dissatisfaction) come from the cross of your expectations with the reality.

Expectations of Spaniard are high. They may assume a bad economic situation but they (or us) consider Spain a historic, old, "important" country in the general aspect. Is not a question of patriotism but your expectations are higher when in the past you have been higher in culture, political power or so on. Also we are placed in Europe, surrounded by "rich" countries and we assume we want to have the same lifestyle, the same statal covers... (This is obviously subjective, but the matter of satisfaction is also subjective so is impossible to answer in other way)

Here you can notice how bad is Spanish situation. Very high debt and deficit combined with a very high unemployement leave you in a lethal combo. You can not spend more to incentive the economy. The lack of opportunities in Spain is tremendous, it is a very hard country to leave in if you want to develop a career in any aspect. Research, engineering, management... hard.

There is more, but with these is enough to get a picture.

Now we come to the responsible of this situation. You see that the government and the political of Spain have not done a great job. Of course is arguably that they were elected by their ideas, so Spanish people have what they voted but apart from this the corruption scandals are uncountable, and affect most of the parties. As a fast overview:

Ah, don't forget the previous king. I think he probably was a good king in general, but his last years were horrendous. It was kind of unofficially demonstrated that he also got millions from traffic of influences (what is bad but maybe not a crime because it was international) but he didn't pay taxes for this money, what is indeed a crime. He paid his delayed taxes but in anyway... His son in law directly again traffic with influence to have a crazy big high level of life, he was having a pretty good salary as a member of Royal Family but he wanted more.

So here we have a overview picture of problems of Spain, bad government, and corruption of politics during the bad government. So, all western societies are generally divided between lefties and righties, millennials against boomers, coast vs inside and so on and so forth. Spain has all of this. But none of the other "develop" countries has such a critical situation as Spain in "objective" metrics. People is aware of this, and therefore they are not satisfied even if any of them have a different view (communism or liberalism or centralism or separatism...) of how to solve.

Actually, when you take into account that the unemployment rate in Spain in 2021 was 14.0%, nearly twice the rate for the Euro-zone at 7.6%, and, per the chart posted on this financial website is second only to South Africa, Spain's government has/is obviously suffering from fiscal irresponsibility.

In America, the Federal Reserve System monitors the economic health of the nation with market tools to control inflation and unemployment. There appears to be a major structural failure with Spain's government, hence those seeking significant/fundamental reforms are clearly correct.

[EDIT] I would add, interestingly, that the combined number for major and total change is the 2nd highest on the survey (Italy being 1st) at 86. As such, one could argue that this is a concern crossing party lines (as in a pocketbook issue) supporting my position, and not a largely partisan matter.

Not the answer you're looking for? Browse other questions tagged government public-opinion spain .

27
Are political alignments of African or Caribbean black immigrants in line with African-Americans?
2
What are general benefits and disadvantages for political leaders to be honest with their people?
8
Why are there so few democratic governments with multiple rulers?