What does the police to civilian ratio depend on?

Here is a list in Wikipedia that tells us the ratios of police vs civilians in various countries around the world.

What does the police to civilian ratio depend on?

How do the countries decide how many police they would put into service?

A few comments from a German perspective:

The lowest rates (Tunisia and below) to a significant extent reflect poor governments (i.e. those with few economic resources per capita) with small budgets that can't afford to hire more police. The next lowest rates are associated with places that are affluent and low in crime (e.g. Finland). Indeed, one can imagine police staffing rates on a Bell Curve which is lowest in the most affluent/peaceful countries, and in the least affluent countries, and highest in the middle. 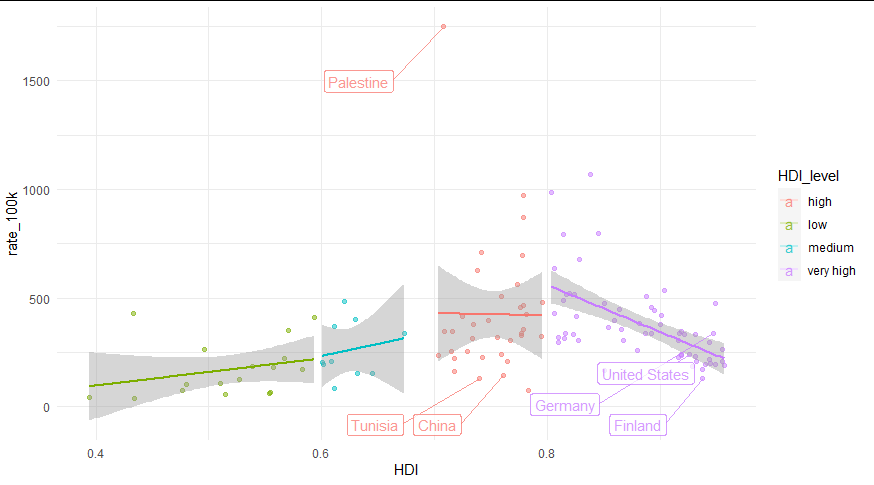 Added by Azor Ahai, called out some countries discussed on this page. n=121 countries I could quickly locate HDI for in that table

Economies of Scale And Urbanization

There are some economies of scale in policing, so very small population, small geographic area nations tend to have more police per capita. Many of the developed country high end outliers are such countries.

Not unrelated is that higher levels of urbanization, on average, are associated with more police per capita.

Other Outliers Mostly Due To Classification Issues

Palestine is an outlier and probably represents, to some extent, police forces being overstaffed in lieu of a military or paramilitary force which it is not permitted to maintain by Israel.

The low rate for China is also probably, in part, a classification issue with less of a clear divide between authority figures who constitute law enforcement and authority figures who do not. Likewise, China makes less of a clear division substantively between crimes and non-criminal anti-social conduct, treating these two things as more of a continuum.

I suspect that there are a few other outliers lurking which are driven by classification issues that defy the attempt at apples to apples comparisons that the list is trying to make.

There is not a hard rule about how many police officers a state should employ. Its governed by individual financial, political and strategic circumstances.

First, the state assigns a budget for law enforcement. The size of that budget depends on how much money the state has available and how much they consider law enforcement to be a priority compared to the many other line-items in the states budget. This is a political decision. Perhaps the current representatives were elected on a "tough on crime" platform, so increasing law enforcement budget is important. Or perhaps they were elected on a "fiscal responsibility" platform, which means they need to use every opportunity they can get to reduce budgets. Or perhaps the state faces problems very different from law enforcement right now, so they need to put the budget somewhere else.

Then the branch of the government which is responsible for law enforcement decides how they want to spend that money. They could decide to spend it on more police officers, or they could decide to spend it on better police officers (more training, better equipment, higher hiring standards which mean they need to pay higher salaries). How they make that decision should be a strategic decision depending on the specific challenges they face in the field. But political pressure also plays a role here. For example, every person hired by the public sector is one less person who takes a job in the private sector, so the size of the police force can be used as a tool to increase or decrease the unemployment rate. So increasing or decreasing their staff might be a political demand the police needs to fulfill. Or they might have to invest money or people into equipment or activities which do not help much with their mission but are politically desired to change the image of the police.

So bottom line is, if one wants to make an argument that a certain state has too many or too few police officers, then it's not useful to look at statistics to compare it to other countries. It is important to take the specific political circumstances into account.

Not the answer you're looking for? Browse other questions tagged police .

3
Does radical pacifism reject police violence?
31
Who are the police in Hong Kong?
3
What are the pros and cons of having police unions?
50
Why is the amount of training for police officers in the United States so low compared to other developed countries?
3
Is the "Defund the police"-argument anti-police or not?