Have cross-border terrorist attacks in Pakistan declined or stayed the same after the Taliban takeover of Afghanistan?

According to the Pakistani security agencies and the government, various terror outfits were hiding in Afghanistan and they perpetrated terror attacks across the border inside Pakistan on a routine basis.

I am curious if cross-border terror attacks have been declined in Pakistan since the Taliban takeover. Because, if that is so, then Pakistan's position would be vindicated.

Have cross-border terrorist attacks in Pakistan declined or stayed the same after the Taliban takeover of Afghanistan?

There is a border barrier being built by Pakistan along with this Durand Line.

The cross-border attacks in Pakistan are carried out mainly by TTP (Tehrik-i-Taliban Pakistan ) , which is said to be the "ideological twin" of the Afghan Taliban who wants to establish their interpretation of Sharia - a hardline form of Islamic governance - in Pakistan.

The Aljazeera news article writes that

So there were just 11 cross border attacks in 2020 , which were fallen in numbers mainly due to the border fence.

After the Taliban takeover:

The TTP has claimed responsibility for over 70 terrorist attacks in Pakistan since the US withdrawal, raising security fears that led to both the New Zealand and England cricket teams cancelling matches.

There is also a BBC article published on 13 October which gives us some numbers. There has been a surge in violence this year, according to data compiled by the Pakistan Institute for Peace Studies (PIPS), an Islamabad-based research organisation.

According to PIPS data, the TTP carried out 95 attacks last year, killing 140 people, and 44 attacks in the first six months of this year.

As the Afghan Taliban made rapid progress in Afghanistan and started gaining control of various provinces from July onwards, the TTP increased their activity. From July until September, the group carried out another 44 attacks, claiming 73 lives. Those killed were mostly members of Pakistan's law enforcement agencies.

So from July to September there were 44 cross border attacks in Pakistan since the Taliban takeover which is more than the numbers given by Aljazeera of 2020 which are just 11 and 82 in 2019. The TTP claimed 70 attacks since US withdrawal. 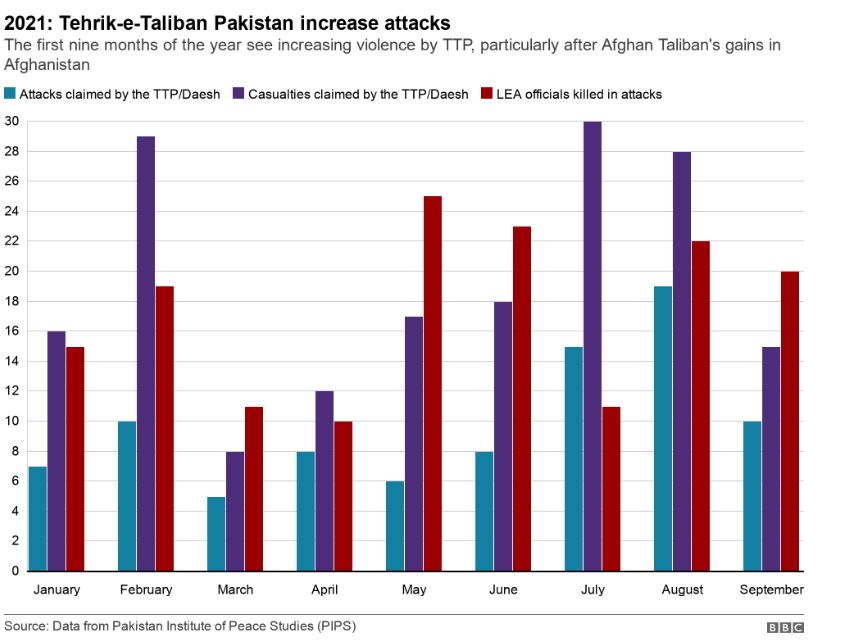 Judging from the numbers and the above graph we can say that cross-border terrorist attacks in Pakistan are increasing in numbers after the Taliban takeover of Afghanistan.

Not the answer you're looking for? Browse other questions tagged terrorism pakistan afghanistan taliban .

5
Does the new Taliban government in Afghanistan still not recognize the Duran line? Do they propose any other well-defined border with Pakistan?

24
Which countries have welcomed the Taliban takeover/victory in Kabul?
40
Does the Taliban government of Afghanistan have a written legal code?
6
What do Republicans criticizing the withdrawal from Afghanistan say they would have done differently, given Trump's agreement w Taliban?