Has any society ever successfully reduced obesity?

Weight loss can be achieved through a variety of modalities, but long-term maintenance of lost weight is much more challenging. Obesity interventions typically result in early rapid weight loss followed by a weight plateau and progressive regain. This review describes our current understanding of the biological, behavioral, and environmental factors driving this near-ubiquitous body weight trajectory and the implications for long-term weight management. Treatment of obesity requires ongoing clinical attention and weight maintenance-specific counseling to support sustainable healthful behaviors and positive weight regulation.

In other words, remaining a healthy weight is very, very hard if you were previously obese - and most people will not do it successfully.

Since the pandemic began there have been renewed attempts by governments to reduce obesity . I wonder, given the difficulty of making it happen, has any society actually achieved it, and how did they do it? These articles talk about obesity, but I'm also interested in whether a society has achieved the same for overweight people who are not obese.

Of course famines have happened which led to people, presumably including obese people, either dying of starvation or having a significantly reduced weight. But that's not what I'm talking about.

I'm asking whether any society has ever seen a large percentage of obese people achieve a healthy weight and maintain it for the rest of their lives. And if so, how?

Below is a bird-eye view on the obesity issue in the developed world. Collectively, the developed world hasn't successfully reduced or curbed the rate of increase, as pointed out by this study: "Today, obesity affects more than 300 million adults, the majority of whom live in the developed world. In the past two decades, the average level of obesity in the Organization for Economic Cooperation and Development (OECD) countries has risen by 8%. Unlike previous centuries, where increased weight was a sign of improved health, the rapid increase in body mass index (BMI) over the past few decades indicates that a growing share of the population in developed countries is becoming obese.

There are many reasons behind the rapid increase, however, two have caught my interest:

The second reason has somehow been reflected in a study of obesity in the US by race gender, and economic class. In the chart below, pay attention to the differences between men and women in each category. 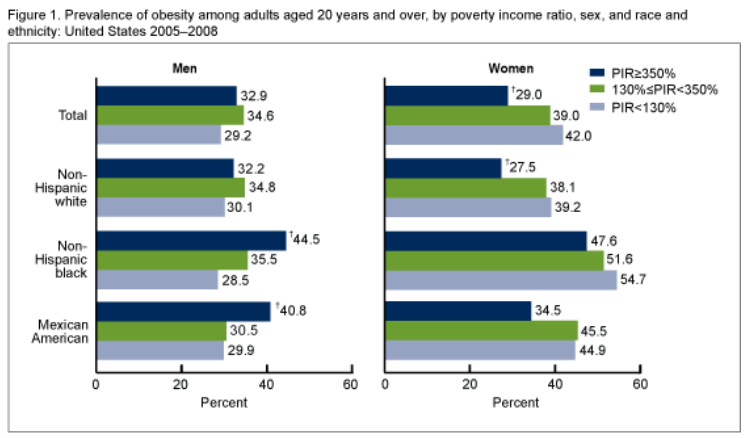 Combining the forces/trends of both the technology innovation (automation), though disputed by the author, and the rapid increase in women labor force participation, the obesity problem will persist in human society for a long while, despite maybe some small, short-lived, success in combating it.

The US has put up many efforts to educate people about the risk of obesity-over weight, and measures to curb high-fat diet and sugar consumption, however, success is rare as the country still has more than 30% (actually 36.2% according to this this source) of its population considered obsessed. Let's assume 30% is the median, then, on the CDC map below, any state that has an obesity rate less than that can be considered a success. Hope this makes sense. 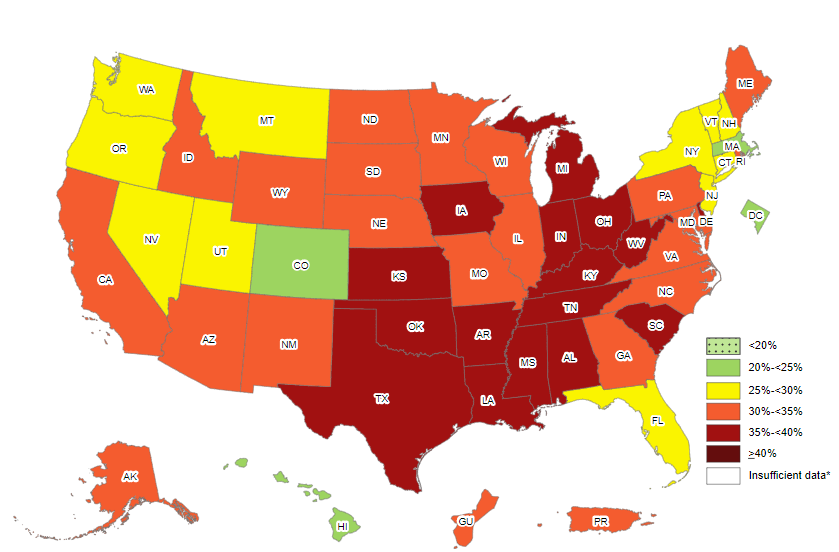 Not the answer you're looking for? Browse other questions tagged public-health society .

27
Has any country's government concluded they need more decentralization to fight Covid-19 or future pandemics?
1
Has any high official promoted reaching herd immunity through getting sick for a disease other than COVID-19?