How is Iran sustaining its economy?

Iran has been under US sanctions for a long time now.

How is Iran sustaining its economy?

Iran has worked around US sanctions by exporting stuff that's not subject to them or hard to trace. They switched from crude to refined oil products, for instance:

The United States imposed sanctions on Iran's oil and gas industry in 2018 to choke off the Islamic Republic's main source of revenues in a dispute with Tehran over its nuclear work.

The steps crippled crude exports but not sales of fuel and petrochemicals, which are more difficult to trace. Crude can be identified as Iranian by its grade and other features, while big oil tankers are more easily tracked via satellite.

Iran exported petrochemicals and petroleum products worth almost $20 billion in 2020, twice the value of its crude exports, oil ministry and central bank figures show. The government said in April they were its main source of revenues. [...]

In addition, Iran exports some fuel by trucks to its neighbours, which involve small transactions that are tough for the U.S. Treasury to detect. [...] Gasoline was delivered by truck to Afghanistan and Pakistan and shipped to the United Arab Emirates (UAE) across the Gulf, a source close to Iran's Oil Ministry said, declining to be named. [...] Iran resumed fuel exports to Afghanistan in August at the request of the Taliban [...] The government of Iraq, which has for years imported gas and electricity from its neighbour under U.S. waivers, did not respond to requests for comment about the gasoline trade. [...]

Iranian oil production is now about 2 million to 2.5 million bpd, with around 2 million bpd allocated to domestic refineries and roughly 500,000 bpd to exports, a source close to the oil ministry said, adding that Iran could boost crude output by 2 million bpd in two to three months if sanctions were lifted.

Basically, Iran still exports' only a quarter of their crude now compared to 2018, but a combination of diversification and some sanction busting through intermediaries has helped mitigate.

It's also incorrect to say Iran is not feeling any pressure. Inflation is almost 45% this year alone. And the exchange rate to the dollar is up almost 740% since 2015.

The Iranian rial is now about 270,000 to the dollar — compared with 32,000 rials for $1 at the time of Tehran’s 2015 nuclear deal with world powers. That has decimated people’s salaries and savings.

Inflation has soared to 45%, the highest level since 1994, while food prices have skyrocketed by nearly 60%. 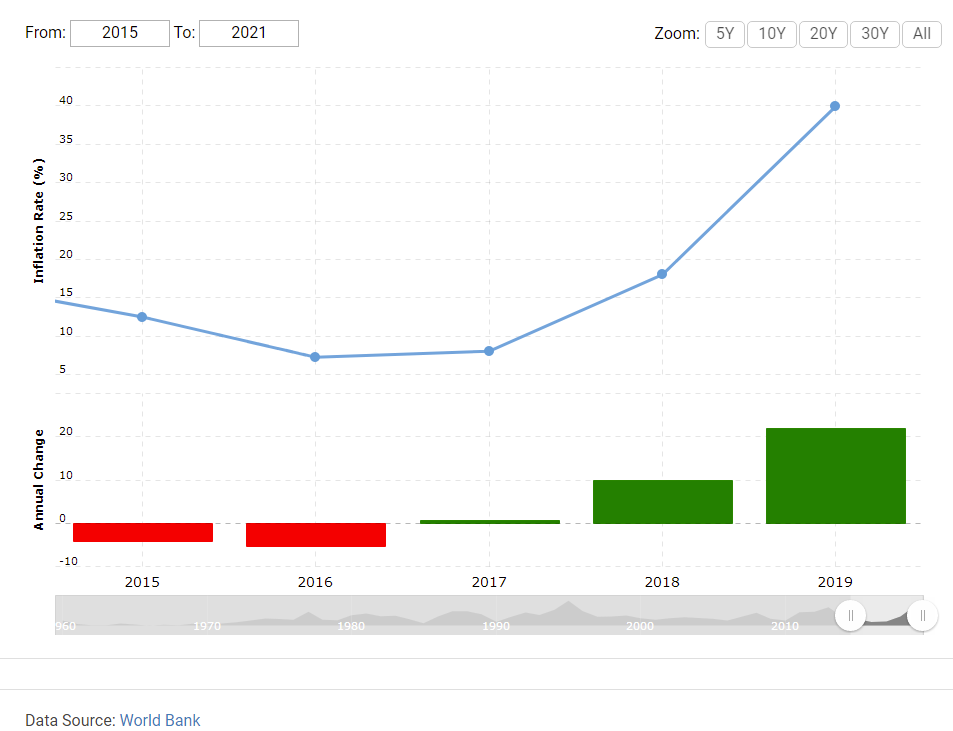 Those numbers a much higher than Cuba's by the way... although the official figures in Cuba are a bit more iffy because of the large[r] internal black market. Cuba has taken a much more severe hit from the pandemic due to their dependence on tourism.

Interestingly Gallup can actually run some polls in Iran, and according to one of these, the locals' view on economic prospects isn't that good. 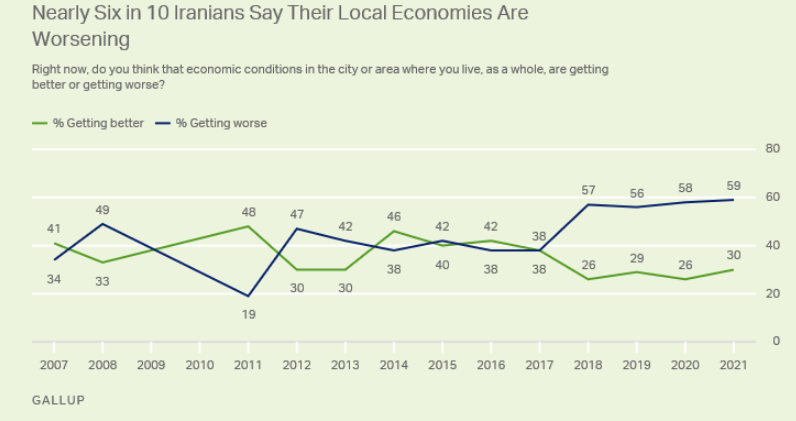 At first, Iran still exports oil, mainly to China and the amount of Iranian export has increased in the last year, but there is a major problem there: Iran cannot get dollar and it receives chinese goods instead.

But the major source of Islamic Republic's income in the last 3-4 years does not come from outside but from inside Iran mainly by increasing taxes and above all the sharp increase of the fuel price. In fact last year the fuel price has increased three times and it led to perhaps the biggest protests in the history of the Islamic Republic.

About Why the economy is not collapsing, I think it has already collapsed and Iran suffers from hyperinflation for many years, yes it's lower than Venezuela's inflation but we should consider that Venezuela's problem started sooner and it's possible that Iran has the same situation after some years.

By selling oil to countries that don't care about US sanctions.

The USA is not the entire World market. It's only a little bit of it.

Not the answer you're looking for? Browse other questions tagged united-states iran sanctions .

16
Why has North Korea been assigned IP addresses?
5
How is Iran able to project its power?
25
Why haven't the sanctions relief improved Iranians living conditions?
4
Why US wants India and other countries to stop oil imports from Iran?
4
Can the EU maintain financial channels and Oil trade with Iran like they claim in their statement on reimposition of US sanctions on the country?
10
Why are all Iran-German/Iran-European trades made in Dollar instead of Euro?
3
Does Iran have any trade deals with China and if it does, can they protect Iran's economy from economic sanctions?
3
Why did the US dispossess an Iranian ship carrying natural gas to Venezuela?
26
Why has Pakistan never faced the wrath of the USA similar to other countries in the region, especially Iran?
6
Has the Biden administration communicated its reasoning for maintaining the embargo against Cuba?