Why does the EU commission want to classify methane as green?

The EU commission has been discussing for several months a proposal to classify Methane as a green energy source, so something that is a little bit less dirty than the worst options available would legally become "clean". As far as I know until now those who publicly spoke in favour of the proposal are Mairead McGuinness and Frans Timmermans on the side of the Commission and speaking for Bulgaria Rumen Radev.

Rumen Radev did not explain the reason for his support. Mairead McGuinness only made vague statements and Frans Timmermans told that such classification was needed by Poland to move out of coal. But Poland is only one out 27 member states and actually they are not planning to invest so much on methane.

Did anybody else speak about the proposal? Are there more detailed explanations and justifications for the proposal?

Note: there are similar discussions about Nuclear power. But I think that the two things are different and should be discussed separately, this question is only about methane gas.

Note 2: Please ignore the related question about nuclear. (link posted by @LShaver). I suspect that the mix up between two extremely different technologies was made on purpose for political reasons.

Brussels delayed a decision on whether power plants fuelled by natural gas will be labelled as green, after months of lobbying from industry and EU governments.

This quote links to the article "BP's lobbying for gas shows rifts over path to net-zero emissions" where we read (emphasis added):

In a December 2020 response to the Commission's public consultation on the issue, [BP] said the new rules could threaten financing of gas projects, and obstruct a shift away from more polluting coal.

BP called for an increase in the emission limits that gas plants would have to meet to allow them to be labelled green without requiring the immediate installation of carbon capture and storage (CCS) technology, which is still deemed too expensive for wide-scale use.

BP is far from alone in its support of gas.

At least nine EU countries, including Poland, Hungary and the Czech Republic, lobbied the Commission to label gas plants as sustainable[...]

European oil and gas producer Eni criticised the 100 g/kWH threshold as too low in December, while a group including Total and Repsol signed an open letter from several energy firms in support of gas as a means to replace coal in the energy mix.

Energy companies are not on some high-minded campaign to slay the beast that is coal with their shining knight of natural gas -- coal is a dying industry, and natural gas is burgeoning. It is merely a happy accident that natural gas plants emit less CO2 per unit of energy produced than coal plants. 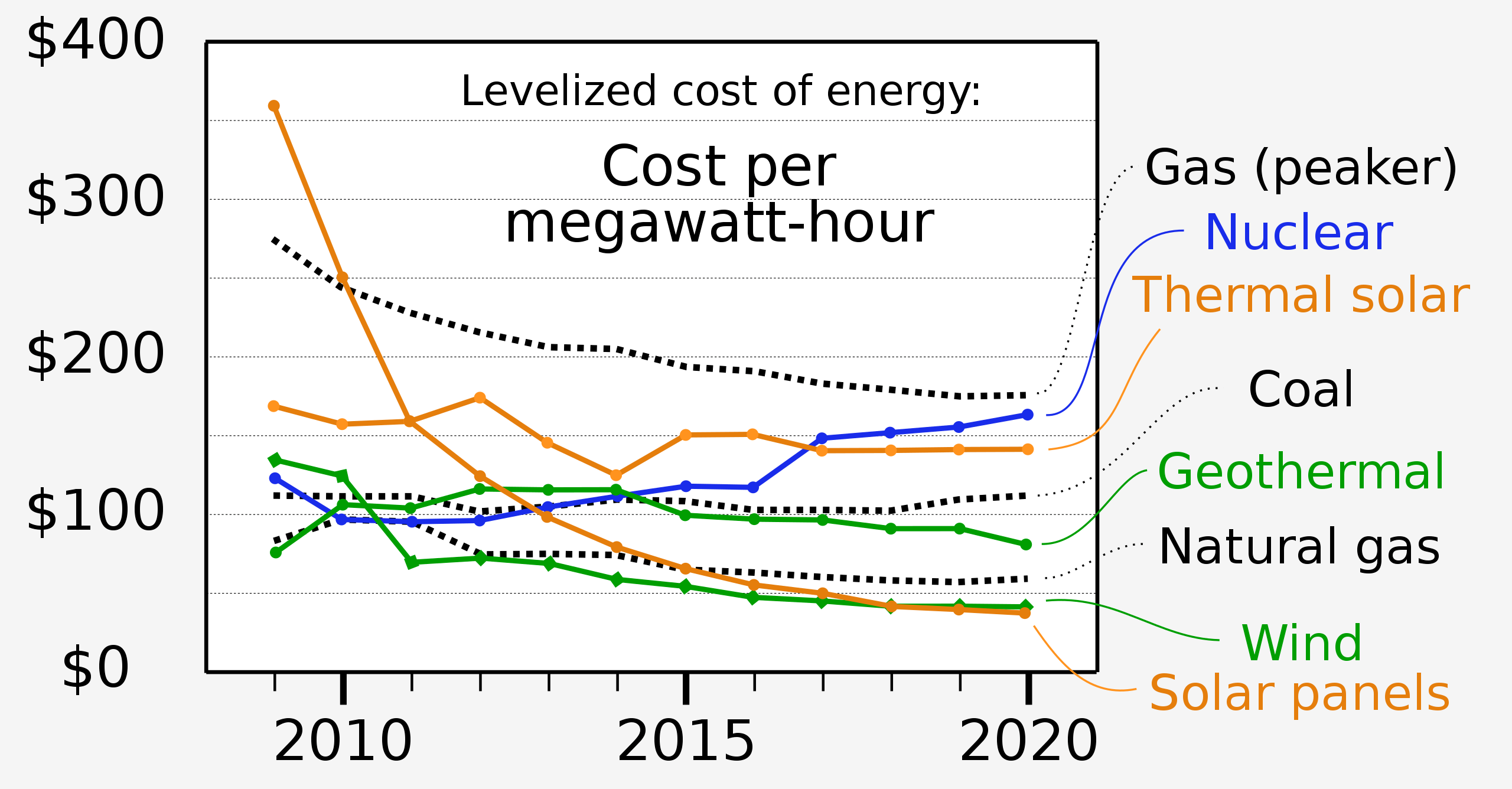 We don't need natural gas to transition the energy system

The chart above indicates that solar and wind generation is already cheaper than fossil fuels. The extensive work of Mark Jacobson et al has shown just what the transition to a completely carbon free energy system would look like, taking advantage of technology that exists today. This transition could by accomplished by as early as 2050 -- less than 30 years from now.

BP has been producing oil and gas for over 100 years, and has annual revenues of close to $200 billion. That's a big ship to steer. Like other oil and gas companies, in recent years they've been investing in renewables and selling fossil fuel assets. But they want to make a profit along the way, so if they can convince the world that natural gas is a "transition fuel," then they can smoothly transition their revenue from what's profitable today, to whatever is profitable in the future.

I wanted to add another technical aspect to the answers (that at least some experts in the EU commision should be aware of).

Renewable electricty producers like wind and solar fluctuate heavily in their electricity output due to weather and the day/night cycle. So if one wants to have a significant proportion of electricity production from these sources one also needs a lot of capacity to jump in temporarily to balance out windless nights. Coal and nuclear power plants are very bad at this because it takes days to turn them on and off. Gas power plants are very good for this purpose because they can be turned on and off within minutes.

The EU commission has been discussing for several months a proposal to classify Methane as a green energy source, so something that is a little bit less dirty than the worst options available would legally become "clean".

It's more than a little bit less dirty. The European Commission (EC) is focused on reducing greenhouse gas emissions specifically. From that perspective, the step from coal to natural gas is about a 50% reduction in CO2 emissions. According to euractiv.com:

Natural gas is the cleanest of fossil fuels, emitting on average 50% less carbon dioxide than coal when burnt in power plants.

Of course methane itself is also a greenhouse gas. That is the subject of a different EU strategy aimed at reducing methane emissions. There's a clear difference between the two though. Natural gas, though mainly consisting of methane, is used as a fuel. When using it as an energy source, the combustion products (mainly CO2) rather than the actual gas are released into the atmosphere. And from that perspective it's relatively clean, especially compared to coal.

But Poland is only one out 27 member states and actually they are not planning to invest so much on methane.

That's not what other reports are saying. For example, that same euractiv.com article also mentions Poland's investing in natural gas:

Poland, which relies on coal for close to 80% of its electricity, is planning to invest in gas turbines as a stepping stone towards reaching its climate goals, alongside an aggressive plan to develop offshore wind in the Baltic.

A pipeline designed to connect the gas grids of Lithuania, Estonia, Latvia and Finland to continental Europe will begin operating in the second half of 2022 after a delay of almost a year, the Lithuanian energy minister told Reuters.

Construction of the pipeline linking Lithuania and Poland will be completed by the end of 2021 as previously forecast, but licensing it will take several more months, Dainius Kreivys said in an interview.

“Deeper market integration will help us make full use of the infrastructure”, Kreivys said, pointing to interest from Polish companies in using underground gas storage in Latvia and the prospect of Klaipeda’s LNG import terminal selling to Poland.

Another gas link between Poland and Slovakia will also come online in 2022, giving Poland a direct connection to Ukraine.

There's a 2020 paper authored by Bulgaria, Czechia, Greece, Hungary, Lithuania, Poland, Romania, Slovakia entitled [the] Role of natural gas in climate-neutral Europe. In it, these countries emphasise the need for an intermediate energy source in moving from coal to more renewable sources. They write:

When replacing solid fossil fuels, natural gas and other gaseous fuels such as bio-methane and decarbonized gases can reduce emissions significantly with well-known and proven technologies and costs not hampering the EU competitiveness. Natural gas can curtail greenhouse gas emissions (60% less CO2 than coal) but also of dusts and other pollutants such as NOx and SOx (up to 99% less than coal). Bio-methane has a neutral greenhouse gas emission impact, it provides the fastest and the most affordable intermediate path to a less carbon-intensive economy, an improvement of air quality (reducing premature deaths due to air pollution) and allows for gradual and effective contribution to EU’s climate neutrality by 2050. Emission reductions due to increased use of gaseous fuels a result of coal/oil to gas switch (strengthened by combined gas/wind generation) also have a positive cross-border impact on improving air quality in adjacent countries.

And later on in the paper they argue in bold:

Gas infrastructure should be therefore considered as one of enablers of sustainable and swift transition towards cleaner heat and electricity generation, transport, industrial processes and residential heating and cooling.

Therefore, the principle of technological neutrality and flexible policies allowing for country-specific solutions must be acknowledged.

The discontinuation of support for further development of gas infrastructure contributing and enhancing the energy transition will make it very difficult for many Member States to mobilise enough investment to cover massive needs for key energy infrastructure projects.

it is of crucial importance to maintain EU support and financial assistance for the development of gas infrastructure through enabling framework, structural funds and investment loans.

The way I read the paper, it is asking the EU to help these countries (including Poland) by featuring natural gas as a transition energy source. I'd say the EC's response described in your question answers the call set out in this paper.

Furthermore, the strategy of moving away from coal and using natural gas as an intermediary step in the transition to cleaner energy sources does not just apply to Poland. As you can see in the quotes above, other countries are in the same transition (though perhaps at different stages).

So why label natural gas green?

It may seem like they're just adding that label for show, but it has broader implications. As the Reuters article in your question mentions, labelling natural gas as a green energy source means projects surrounding natural gas can be green investments:

The Commission last month published its "sustainable finance taxonomy", a list of economic activities that can be marketed as green investments that is central to the EU plan to steer private capital into activities that will help meet climate targets.

Not the answer you're looking for? Browse other questions tagged energy-policy european-commission .

17
Has anyone besides the EU classified nuclear as a "green investment"?
-1
Could Russia be bluffing on an invasion of Ukraine in order to keep profiting from the high price of liquified natural gas?