Why were the Liberal Democrats successful in the North Shropshire by-election instead of Labour?

In the 2019 general election, the Labour Party came in second in North Shropshire.

When the results were declared, not only did the Liberal Democrats overturn the Conservative majority, the Labour party also performed significantly worse compared to the General Election two years previously.

Are there specific reasons why Labour is not running stronger in a seat where it traditionally places second?

The demographics of the area are such that there are a large number of voters who are strongly opposed to Labour party policies (or perhaps to the Labour party brand), and would not vote for Labour under any circumstances.

However these voters might vote LD to register their disapproval of a particular Conservative candidate, or to protest particular events.

In FPTP, tactical voting is important. There is a sense that "This time round, the LD are likely to be competitive", and so much of the anti-Paterson vote has gone to them. This then becomes self-fulfilling: As support for a party grows, more people may vote tactically for them.

I think James K has hit the nail on the head regarding traditional Conservative voters being willing to cast a Lib Dem protest vote while still regarding Labour as toxic. There are a couple of other factors, though, which I think are worth bearing in mind:

Firstly, the Labour candidate who ran in 2015, 2017 & 2019; Graeme Currie, was excluded from the local shortlist by the National Executive Committee because of concerns about historic social media posts. He released a statement where he described the NEC as a 'kangaroo court' using 'Stalinist tactics'. The relatively inexperienced 26-year-old Ben Wood was instead selected at the local hustings, but it's conceivable that the exclusion of a locally well-known and seemingly well-liked candidate could have contributed to voter apathy or a willingness to vote Lib Dem for Currie's supporters.

Secondly, there have been murmurings that Labour made a strategic choice to not prioritise the seat, perhaps understanding that the LD candidate had more of a chance of flipping the seat. Former Lib Dem leader, Tim Farron, tweeted:

Starmer made a wise strategic choice not to prioritise a rural / market town seat where their ceiling was always going to be lower than ours. Almost as wise as @EdwardJDavey choosing to chuck the kitchen sink at it!

In the FT on December 2nd, there was also a suggestion that there was a sort of unofficial quid-pro-quo deal between Labour and the Lib Dems, for the LDs to not campaign hard in the Old Bexley and Sidcup in exchange for Labour running a skeleton campaign in North Shropshire:

Although both opposition parties insist there is no formal deal, the Lib Dems have fought a minimal campaign ahead of Thursday’s Old Bexley and Sidcup contest in south-east London, giving Labour a clear run in a solidly Tory seat.

Meanwhile, Labour has decided not to campaign heavily in the Shropshire North by-election on December 16, even though the party finished second there in the 2019 general election, allowing the Lib Dems to be the focus for anti-Tory protest.

Labour strategists have said the rural Shropshire seat — left vacant after the resignation of former minister Owen Paterson in the sleaze row — is inhospitable terrain for the party and not worth spending scarce resources on.

One said: “We can see the Lib Dems have focused on Shropshire North and they’ll probably end up a good second there. They came second in the recent local elections — from their perspective it makes sense for them to concentrate their resources there.”

Furthermore, Shadow Business Secretary Jonathan Reynolds told BBC Breakfast on the morning of the election result that the party "put the effort into it that was proportionate to our chances of winning".

The Liberal Democrats positioned themselves in their leaflets as the 2nd party in the Shropshire area based on the May 2021 local council elections. 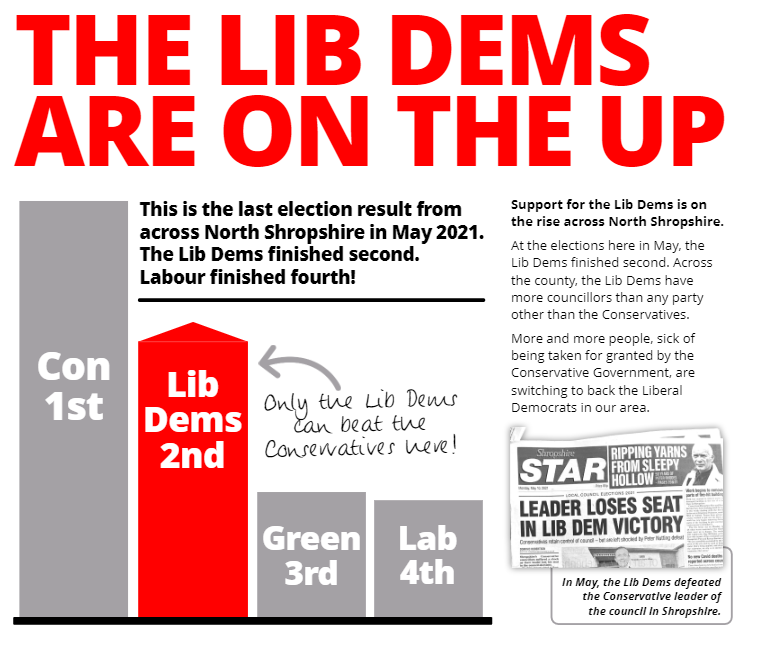 Though the relevance of local council elections to a constituency seat is controversial, not least because you can see from the gains the same council situation (LD's in 2nd) would have been in place during the 2019 GE (Lab came 2nd), these results are a big part of the reason the LibDems were seen as the favourites to overtake the Conservatives in North Shropshire.

Not the answer you're looking for? Browse other questions tagged united-kingdom election labour-party liberal-democrats .

5
What are the practicalities of having a non-MP as your party leader?
5
Why did the Scottish National Party supplant Scottish Labour?
11
How could an alliance between the Green Party, Liberal-Democrats and Labour Party be formed?
13
Are UK party leaders typically from safe seats?
5
Why do the leaders of UK political parties need a seat in parliament?
40
Why does the BBC claim that there is 'no clear winner' in England's 2018 local elections?
2
Any survey-based analyses of "why you voted that way" for the 2017 UK election results?
2
Can a Prime Minister be appointed if they do not have a seat in the Parliament?
5
Have any UK party leaders other than Sir Ed Davey been elected after previously losing a leadership contest?
31
Why doesn't the UK Labour Party push for proportional representation?