In the past I have heard people assert that racism is caused by capitalism, and this has never really made sense to me.

However, this answer references a theory by Immanuel Wallerstein that explains how capitalism leads to racism. In a nutshell, capitalism causes inequality, and inequality causes cognitive dissonance (the wealthy like the existing system but also feel guilty about it). To relieve the dissonance, the wealthy shift poverty onto an easily identifiable group (such as a specific race) so they can believe that it is the group's fault that they are poor, not the system's fault.

This makes a lot of sense to me, but it is not obvious to me whether it is true. Is there a way to empirically verify whether this theory holds water? I can imagine a psychological study could verify that inequality causes guilt and cognitive dissonance, but how would one verify that people repsond to the cognitive dissonance by shifting poverty onto people who are "other"?

T HummusT Hummus
11911 bronze badge
New contributor
T Hummus is a new contributor to this site. Take care in asking for clarification, commenting, and answering. Check out our Code of Conduct.
2
Add a comment  |

While it would be hard to claim that no instance of capitalism has ever caused racism, it doesn't seem all that hard to find cases of racism that had little to do with it.

OK, what if it just a question of "wealth", rather than "capitalism"?

Then consider that you might confusing correlation with causation: if you can suppress/confiscate the wealth of minorities you oppress then you will be richer than them.

Naming capitalism as "the cause" seems far-fetched (but quite likely to correlate with increased book sales).

Yes it can be easily disproved. One of the more drastic disproofs is The Most Important Graph in the World. For thousands of years there was no meaningful increase in wealth in the entire world. Every means and method of societal arrangement was tried. People bounced around on the ragged edge of starvation, often below that edge.

Then, near the end of the 18th century, capitalism was invented. The result was an explosion of wealth. It is an exponential increase such that it is quite possible that within 20 years we could see the near eradication of absolute poverty. No other arrangement of society has ever done anything to lift people out of poverty. Only capitalism has done so, and it has done so world wide for 2 centuries. 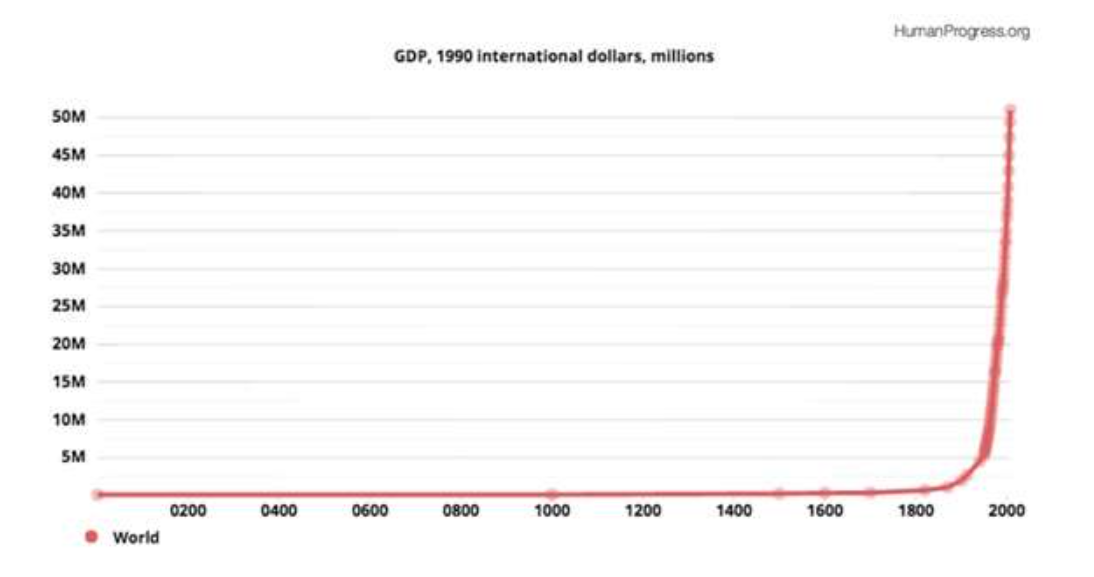 The notion that capitalism can only enrich people at other's expense is wrong. Massively and clearly wrong. One might almost call it culpably wrong. Capitalism enriches the people who engage in voluntary trade. The well-known win-win trade arises only in voluntary free exchange. If it isn't win-win then people won't voluntarily engage in it. If they are not voluntarily engaging in it, then it is only going to be win-win by sheerest accident.

Correlation does not equal causality. Yes. But at no point did I claim that.

Put not your faith in princes becaue princes produce stagnation. Then global substitute for "princes" every other form of government or society organization and note that 2000 years of history clearly show they don't raise people out of poverty. Then note that people who have been raised out of poverty were so done by capitalism. Not by some unknown mechanism but explitly and openly by capitalism. Win-win trades openely arrived at with force banned. People doing what their own self interest dictates. People free to choose their own path. The rising tide raises all boats.

At the same link is the next graph. The interesting thing here is not that world per-capita GDP is increasing exponentially. Which it is. It is that it is increasing fastest where there is more freedom.

We do not have to guess how this happened. We can go ask the people involved in it. Freedom means they can choose to participate in trades that are good for them. Lack of freedom pushes them off these choices. It is entirely open and clear. Capitalism produces these things as predicted. In the manner predicted. 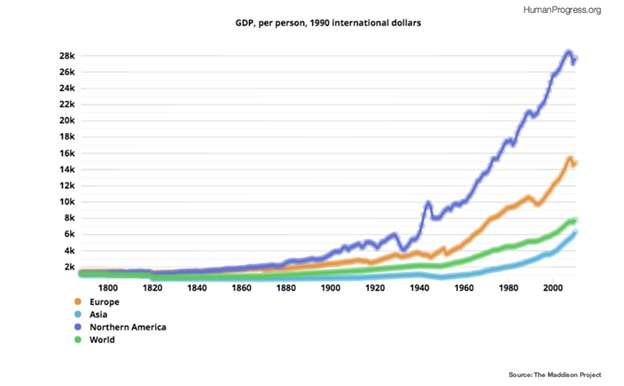 Not the answer you're looking for? Browse other questions tagged political-theory racism capitalism empirical-studies .

4
Can racial profiling (by police) in the United States be explained simply by the socioeconomic status of the suspect?

3
Is there an equivalent of the horseshoe theory for economic systems stating that monopolized capitalism = communism?
1
Who formulated the theory that states actively promoted capitalism?
0
Capitalism and Democracy
34
Why do few/no countries claim capitalism as their ideology?
2
What exactly is "Human Capitalism" and does it conflict with the function of capitalism?
24
Can socialism and capitalism coexist in the same country?