No. Obligations are listed under Article 5 of NATO.

The Parties agree that an armed attack against one or more of them in Europe or North America shall be considered an attack against them all and consequently they agree that, if such an armed attack occurs, each of them, in exercise of the right of individual or collective self-defence recognised by Article 51 of the Charter of the United Nations, will assist the Party or Parties so attacked by taking forthwith, individually and in concert with the other Parties, such action as it deems necessary, including the use of armed force, to restore and maintain the security of the North Atlantic area.

Ukraine is not currently a member, as the UK defense minister has pointed out:

In an interview with the Spectator, Mr Wallace said Ukraine was "not a member of Nato, so it is highly unlikely that anyone is going to send troops into Ukraine to challenge Russia".

NATO is a mutual defense pact between its members, who have perhaps not coincidentally, demurred in granting Ukraine NATO membership to date.

The idea of eventual Ukrainian membership has been floating around since 2008, pushed by then POTUS Bush. Perhaps related to Russia's invasion of Georgia in August 2008.

Now, going on, past direct obligations to wider considerations about ethics, maintaining peace and being firm to deter future wars, there could be different viewpoints depending on your opinions:

(this is addressing to defend against tyrannical leaders) 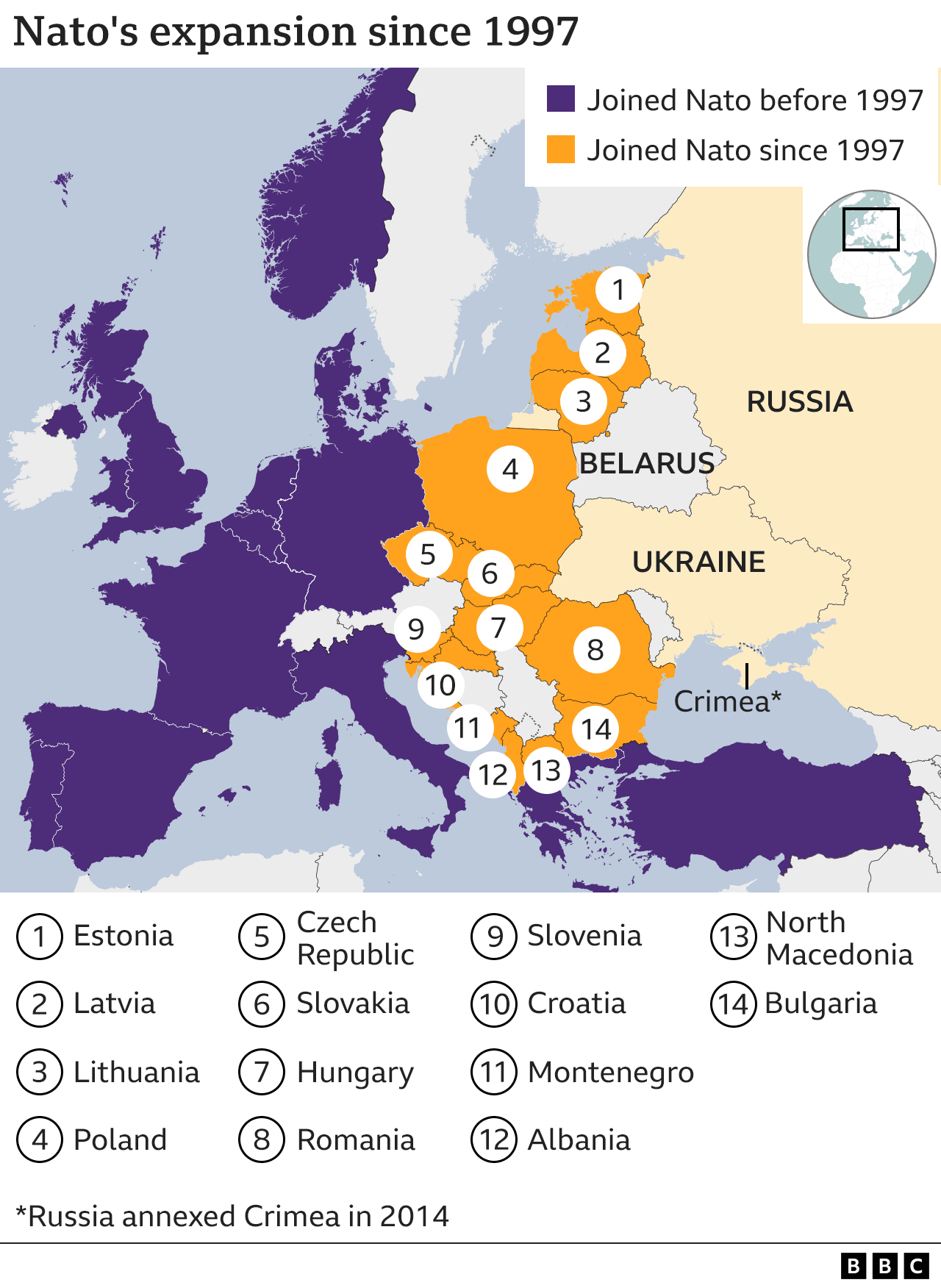 Possible NATO responses to an invasion:

I am sure I missed some. But a firm enough signal to Russia that actual attacks would be heavily penalized, somehow, may very well suffice to deter Putin from a real invasion of Ukrainian-held territory (that's my guess at this point).

Complicating this is no one really knowing what Putin wants or what he would need to call off his threats: he has a domestic political audience to play tough guy to and it may very well be that a successful and prosperous neighboring Ukraine, run on Western principles, would be an unacceptable indictment of his domestic failures, whether or not Ukraine was threatening Russia militarily (note: this last is predicated on a explicitly neutral military role for Ukraine, like Finland in the 70-90s, not on a partial NATO association).

Last his demands on withdrawal of NATO presence in existing NATO members are so off-the-top maximalist that it is hard to see them as genuine negotiation points: they don't allow for any partial concessions that would allow both parties to meet halfway.

It should be noted in context that NATO is not the only body that may protect European states from invasion. With specific regards to Ukraine, the Budapest Memorandum assures that the United States, the United Kingdom, France, Russia, and China will help defend Ukraine in the face of threats to the territorial integrity or political independence of Ukraine (and Kazakhstan and Belarussia as well).

Of course, one of the "protectors" of Ukraine is Russia itself. Furthermore, the remaining NATO states that pledged to defend Ukraine (US, UK, France) did not do so during the invasion of Crimea.

No, NATO is not obliged to defend Ukraine, since Ukraine is not a NATO member.

Why is it not sending NATO troops on the Ukraine border to defend against Russia?

Some NATO members did send their troops or equipment. However, it is worth noting that Russia, as well as three NATO members — USA, Great Britain and France — are nuclear states, and a direct conflict between Russian and NATO troops, even a minor border skirmish, may easily escalate into a full-blown nuclear war. So, even if some of these troops sent to Ukraine do enter conflict with Russian troops, it is not likely to be interpreted as an agression against a NATO member state (automaticlaly triggering NATO response), but as an internal affair of those states.

I thought the point of NATO is to defend against tyrannical leaders in Europe attacking other European sovereign states.

NATO was created during the Cold War, as a counter-balance to the Soviet Block (although, technically, the Warsaw Pact was concluded after the creation of NATO). NATO's role since the collapse of the USSR is rather vaguely defined. In any case, if NATO declared itself as an authority in deciding which regime is tyrannical and what aggression is justified, it would be pure vigilantism. Officially, this role belongs to the UN, of which all the NATO members are members (including three aforementioned nuclear powers having permanent seat and veto power in the UN Security Council, alongside Russia and China).

Germany did this in the 1930s attacking smaller countries such as Poland first. What is the purpose of the organization at this time?

NATO did not exist at the time of the German aggression that you are referring to. Moreover, comparison of Russia to Nazi Germany is highly objectionable — in terms of historical facts, in terms of current realities, as well as from the point of view of the basic respect for Russians.

As far as history goes, in the 1930s, the world powers (mostly Britain and France, with USA idly standing by) repeatedly conceded to Germany demands and didn't honor their obligations to their allies — notably during the Munich agreements (Czechoslovakia), and during the Phoney War (Poland). Moreover, the US entered the War only after the attack on the Pearl Harbor — when all of Europe was subjugated and the Soviets have already beaten off the Germans' first attempt to take Moscow. Moreover, technically, it was Germany who declared war on the United States (the US reciprocated the same day, and was likely planning to declare war).

NATO members can only defend NATO members. Ukraine is not a member of NATO, therefore, NATO will not protect it. Moreover, Jens Stoltenberg constantly tells that NATO will not send troops to help Ukraine against Russia.

Why is it not sending NATO troops on the Ukraine border to defend against Russia?

There are several reasons, one of them is that all the hysteria about the possible invasion is primarily whipped up by the West itself.

Moreover, recently there has been a campaign of disinformation. For example, satellite images were thrown in, which were accompanied by phrases about a possible attack. A month or two ago, Russia was conducting military exercises, and the Western press whipped up hysteria and said that Russia was about to attack Ukraine.

At the same time, "We don’t see any great danger on our borders at the moment", said Secretary of the National Security and Defense Council Alexei Danilov (December 30).

Also, it is important for the US to delay the launch of Nord Stream 2. This is another reason why the US actively wants to make Europe believe in a possible Russian invasion. Also, recently, the President of Ukraine issued a public appeal to his citizens with the words that they calm down and do not believe the reports about the Russian invasion. Also, in Ukraine, there is no mass preparation for a war with Russia, absolutely nothing is happening there, except for the pulling of troops to the Donbas to prepare a military operation in the Donbas.

These are just a few reasons. There are others, but the main point is that no one from NATO was ever going to seriously stand up for Ukraine. Ukraine is just a bargaining chip in the new round of the Cold War between the US and Russia. If there is a war between Ukraine and Russia, then NATO and the US will benefit from this, since they will not have to fight with Russia - Ukraine will do it for them. And it does not matter that Ukraine loses, in any case it will harm Russia.

And Russia does not want a war with Ukraine, since a lot of Russians and Russian-speakers live in Ukraine. Trying to convince the public that Russia needs a war with Ukraine is part of a big campaign in the press.

I thought the point of NATO is to defend against tyrannical leaders in Europe attacking other European sovereign states.

As for the "tyrannical leaders" - who will decide who is a tyrant and who is not? USA and NATO countries? On what basis will they decide? Will there be some kind of court or will it just be a joint decision, with no possibility to appeal? No one cares which country has which leader, this whole story is only about spheres of influence, money and underground resources.

If the United States considers the Russian authorities to be tyrants and wants to fight them, then obviously Russia will perceive NATO as a threat. If NATO wants to fight Russia simply because they don't like Putin, then it's not surprising that Russia will retaliate and fight back. This is exactly what we are seeing today.

Russia knows very well how NATO dropped bombs on Yugoslavia in 1999. Bombed the city and it was mostly civilians who suffered, including many children. Moreover, NATO dropped 15 tons of depleted uranium as bombs. Also, in Russia, they know how NATO invaded Libya on March 17, 2011 in order to help kill Muammar Gaddafi and replace him with a pro-Western politician. Etc.

It would be interesting to ask the opinion of Guantanamo prison inmates or Syrians, Libyans, Iraqis, Palestinians, Iranians and so on, about who is a tyrant.

In modern times, the one who screams louder is right, so propaganda is working at full strength. Soon we will know much more about Russia than about our own countries.

36
Why doesn't Russia join NATO and what would happen if it tried?
17
Why did NATO not extend to include Ukraine along with the Baltic States back in 2004?
5
Can the US and EU sanction the oligarchs supporting Putin in order to deter him from starting a war in Ukraine?

12
Why hasn’t Ukraine joined the North Atlantic Treaty Organization (NATO)?
22
Has any Western leader articulated how NATO would benefit from admitting Ukraine?
32
What is the motivation for the expansion of NATO in Eastern Europe, including Ukraine, at the risk of starting a hot war with Russia?
36
How would Ukraine joining NATO affect Russian security?
14
Did the Minsk Agreements somehow give Russia the right to move troops into Ukraine?
14
Why are European countries increasing their defense budgets if they are members of a nuclear-armed NATO?