Can the aggressions of Russia against Ukrainian territory be understood in a politico-historical light? [closed]

Ask Question
Asked 4 months ago
Modified 2 months ago
Viewed 896 times
-4
Closed. This question is off-topic. It is not currently accepting answers.

The primary purpose of this question appears to be to promote or discredit a specific political cause, group or politician. It does not appear to be a good-faith effort to learn more about governments, policies and political processes as defined in the help center.

With the Crimea occupation and the further rather aggressive steps it seems as if Russia tries to annex parts of Ukraine, and it is unclear whether the Crimea is already an annexation of the Ukraine in a fully political view since there are some points that make the Crimea Russian heritage - at least from the viewpoint of the Russians, which is politically quite important of course.

Is there a political reason why Russia might be less expansionist regarding Ukraine than it is said to be, and that inspite of the occupation / annexation of the Crimea? So that Russia is shown worse than it politically is?

Is there a way to show Russia's standing in such a light that everything is still understandable, or is Russia "just wrong" in its aggressions?

Or just to make it a one-liner: does Russia not want to annex parts of the Ukraine? Which would not be on-topic, it seems. Therefore:

Can the aggressions of Russia against Ukrainian territory be understood in a politico-historical light?

The idea of this question arose when in Germany, vice admiral and chief of the German Navy Schönbach had to leave his position. Among other things, he had said that the Crimea will not come back (which accepts the annexation of Ukrainian territory) and after this, he said that it was nonsense to say that Russia wanted to annex parts of Ukrainian territory (link to the talk).

This question is not about judging upon this logically or about the internal motivations of this vice admiral.

Some points to ponder

The reasons in favor of Russia or Ukraine could be politico-historical, for example:

From searching for a map of "Moscow Russian expansion", you find out quickly that it all started from tiny Moscow area, taken from here but you will find many more of course.

There was a longer text here on cossacks, it is now an answer at What exactly does Putin mean by 'genocide' in Ukraine? - though likely not fitting there either. (btw, this link to the question about genocide seems to be on-topic. Therefore, a question about an opinion of Mr. Putin is allowed in this community, while this question here was closed in the first place since it was only about understanding the opinion and internal motivation of a person. or something like that. I do not see why the other question is different from that.) 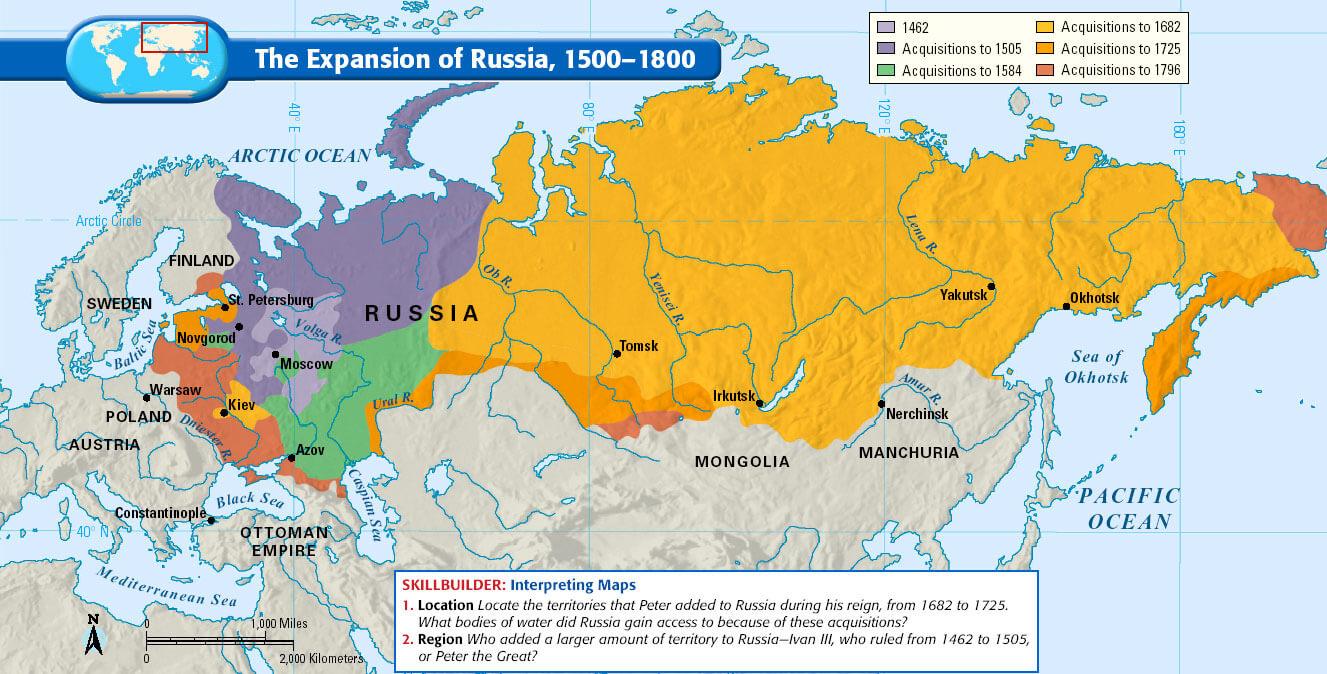 In my opinion, this research on Ukrainian(-Cossackian) history has not been done enough. What is obvious is that Russia is expansionist and was it all over the history with war and cruel methods, but it also had to be like that perhaps: the perhaps most important outweighing point is that Russia defeated the even more expansionist Ottomans (who had conquered even the new "homeland" in nowadays Turkey and tried expanding till Austria), making the Crimea a possible gift for Russia for the efforts in the Russo-Turkish wars.

A short search for similarities in history: 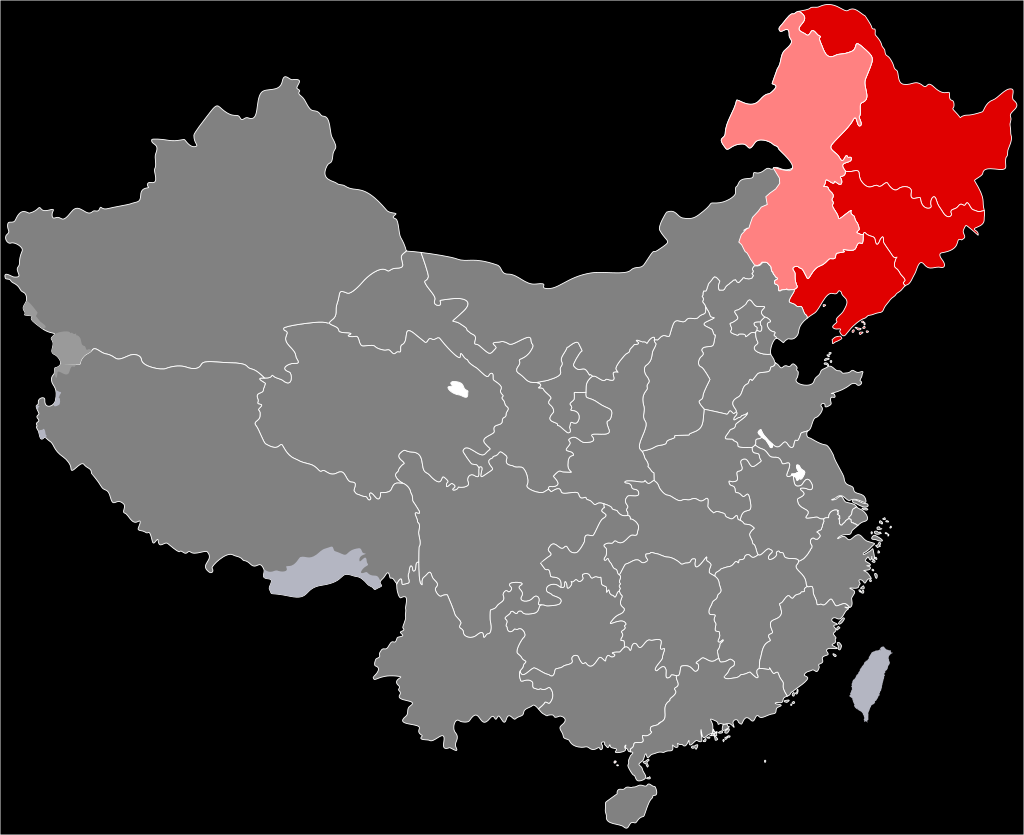 The two slight similarities are of course not the copy of what is happening. One just sees that homogenous migration, as mass migration, by military act, forced bad conditions on the local people or as long-term event of economic migration, can take land, the methods can end up all the same.

On the other hand, Russia has used the help of the cossacks to get this far at all and win. It is unfair against the Ukrainian cossacks who were forcefully and often cruelly replaced with Russians in the nowadays conflict areas of Ukraine in Stalinist time. There were also Russian cossacks in the Soviet union, but the nowadays Russian speakers in the Ukraine are likely ethnical Russians, not Russian cossacks. On the Crimea, there few cossacks in Stalinist time (those who had fled from the Bolsheviks), but that does not mean that the cossacks would not have a share in trying to get it back from the Ottomans. Cossacks had at least tried to conquer the Crimea in mid 16th century and just could not hold their positions and later helped in the Russo-Turkish wars.
That is why Ukraine should find out itself how they see their own Russian speaking population (which is not the original population) and take the next steps:

This conflict shows how any expansionist state can trigger many more bad things, and in my opinion, any expansionist state starts already with being 50 % on the wrong side when claiming conquered land as historically its own unless the weak points are openly discussed. Especially the Stalin time when the Russian corridor through eastern Ukraine until the Crimea was made by organised settlements was a totally new point to me, never heard of before, hope I have not misunderstood it. But if I understood it right, this would mean that making the nowadays mainly Russian speaking Ukrainian areas autonomous and getting a fully Russian-speaking area from Moscow till the Crimea would just be another win of the cruel Stalinistic settlement policy. Wrapping it up, having Ukraine with the Crimea and a share of Russian speaking population was historically right. Losing the full corridor and the Crimea to Russia is historically wrong since it was not Russian speaking until organised settlement took place that replaced Ukrainians. If that is true, Russia must invade to reach the Stalinist aim, and that explains also why they directly occupied the Crimea: since Ukraine will not accept the Russian suppression for historical reasons. Any longer digging in history would lead Ukraine to decide to hold the Crimea and the eastern lands, regardless of whether there are so many Russians nowadays. That would mean that green men were likely the only chance for Russia to catch the Crimea, and that Russia's actions are thus politically understandable, but prove Russia once again as a long-term aggressor which Ukraine should not trust for historical reasons.

The question is problematic because could is a very weak standard. One could survive a free fall from several kilometers up, it just isn't very likely.

Also, Russia has occupied and tried to annex part of Ukraine, as much of the international community understands the borders. This annexation has not been formally acknowledged by the rest of Europe and the US, and Russia certainly wants to get it accepted.

One can make a good case that the Crimea was historically Russian. If there had been a treaty on a transfer of territory, freely negotiated between the two countries, I predict that it would have been accepted by the international community without any fuss. However, Russia had several times affirmed that borders in Europe should not be changed by force, and a referendum under the guns of the little green men was widely seen as illegitimate.

So one could make the case that the Crimea is a different case from the rest of Ukraine and that the Russian conquest of that part of Ukraine is no indication of any Russian desire to conquer the other parts of Ukraine. One could also realistically estimate that the Crimea is not going to be returned, barring more significant upheaval in the post-Soviet states or a military defeat of Russia -- and defeating a nuclear power is extremely dangerous. But Ukraine would be wise to reserve the cessation of any part of their territory as a powerful bargaining chip for the final settlement of the conflict, and that is nowhere in sight. Compare how West Germany held out on formally accepting the Oder-Neisse line until the final settlement.

Russia might be satisfied with taking Crimea and enforcing a privileged zone of interest in some or all of the Near Abroad, restricting the sovereignty of Ukraine.

Russia might be trying to re-incorporate all of Ukraine into Russia.

Historically right is usually what is written in the history books - which again depends on who wrote the history books (it is usually the winners writing what is politically suitable at the current moment - e.g., one can go to Barnes&Noble and easily convince oneself that the American history books about WW1 written before the NATO bombing of Yugoslavia are usually sympathetic to this state, describing it as a victim, whereas the books written after the event describe it as an aggressive and subversive state, instigator of terrorism. There are historical facts to support both points of view.)

As an example rather similar to Crimea (Krim is a German and Russian word), one could mentioned the American military base in Cuba - Guantanamo Bay Naval Base. After the Cuban revolution, and installation of a regime hostile to the United States, the US refused to evacuate the base. Some military action has ensued - both local, as well as in a form of an attempted invasion of the whole island. However by now all these have been largely forgotten - for decades the base served as a proud front line in defending "freedom and democracy" (see its depiction in A few good men), until becoming a focal point of the infamous scandal about prisoner treatment. (To qualify the comparison, it is worth pointing out that, one the one hand, Guantanamo had never been a US territory; on the other hand, the Cuban government has behaved itself inconsistently by cashing the US checks for the lease of the base, while claiming that it wanted the US out.)

Northern Cyprus could serve as another example, which became nearly respectable with time. The situation with Taiwan, which officially does not exist as a country, is yet another one.

Not the answer you're looking for? Browse other questions tagged russian-federation ukraine territory territorial-dispute .

36
What makes the war in Ukraine exceptional?
31
What exactly does Putin mean by 'genocide' in Ukraine?
26
To what does US Army Lt. General H. R. McMaster refer saying that Germany's Social Democratic Party has a 'deep and unnatural affinity' for Russia?
16
Why is the Crimean peninsula so important for Russian trade?
3
Why didn't Russia annex Abkhazia and South Ossetia?

18
How could it happen that Ukrainian soldiers did not try to defend against the invasion?
18
Why don't Russia and Ukraine enter an official state of war?
15
How can Germany increase investments in Russia while EU economic sanctions against Russia are still in place?
12
Why hasn’t Ukraine joined the North Atlantic Treaty Organization (NATO)?
10
Why do Crimeans think so differently of Russia compared to the people of Donetsk/Luhansk?
14
Have any politicians in Ukraine considered ejecting Luhansk and Donetsk?
0
What is known about NATO's plan for the safety of Poland?
33
Has Russia explained why Ukraine can trust them, given the Budapest memorandum?