Is China's view in line with Russia's view on Ukraine?

Blinken reported the American position on Ukraine. Wang Yi pointed out that solving the Ukraine problem lies in the New Minsk Agreement [Minsk II] . Minsk II gained the approval of the UNSC, and all sides have recognized it as a foundational political document, and ought to effectuate it concretely. China will support any efforts that conform with Minsk II's direction and spirit. At the same time, we call on all sides to remain calm, and refrain from stoking tensions or sensationalizing crises. Wang Yi emphasized that the security of one country cannot be at the cost of another country's security. Regional security cannot be guaranteed by strengthening or expanding military groupings. In today's 21st Century, all sides should abandon Cold War thinking, reach a balanced, effective, and sustainable European security mechanism through dialogue, and Russia's legitimate security concerns should be respected and resolved.

The quote is phased in a politely ambiguous diplomatic language.

Superficially, China is staying above the fray. But the Chinese position is identical to the official Russian diplomatic position, in that the Minsk II agreement is the framework for the situation.

The Russian position is further predicated on the claim that Ukraine did not make a good faith effort to fulfill its obligations under the agreement. China does not specifically repeat this in the quote above.

References to Russia and US are left out entirely, which is not unusual for diplomacy surrounding proxy conflicts.

The line about fulfilling the direction and spirit of Minsk II can be interpreted to refer to:

As of 2021-ish, essentially none of the terms were complied with. Including:

So to answer the question more directly, if the fighting of 2014-2015 were to repeat in the same sequence -- i.e. with Ukraine attempting to assert control over the breakaway republic's territory, then it is most likely that China would interpret it as a gross violation, by Ukraine, of Minsk II and the accompanying UNSC resolution. I'd expect China to diplomatically support efforts to restore the status quo as of the agreements.

This is a very good question. There are multiple key factors that influence China's actions in Eastern Europe in general but due to the narrow scope of this question let's focus on solely China's position in Ukraine-Russia talks.

China has a major interest in conducting business in Ukraine as indicated by China being the largest import trade partner, with 2021 setting a new record of $15,76 billion and Ukraine being the largest sunflower oil and corn seller to China. Not only that, but China is encouraging the adoption of the infamous "One Belt One Road" initiative as indicated by China-Ukraine infrastructure partnership. (Source: an interview with the Chinese ambassador in Ukraine).

Politics wise, the current Ukrainian government as well as some of Ukraine's political elites seem to be favourable towards China, as indicated by the presence of high-ranking officials on China-related official events, Ukraine withdrawing their support of Canada's UN Human Rights statement regarding the treatment of Uyghurs in China and many other political "favours" done by both sides. This, topped with a borderline insane statement of David Arakhamiya (who is the leader of current largest political party in Ukraine "Sluga Narodu" which hold the majority in Ukraine's Parliament and is also the party of Ukraine's current President Volodymyr Zelensky) that the CCP and "Sluga Narodu" principles align (despite "Sluga Narodu" previously claiming to be libertarian Source) presents a clear pattern of being quite warm towards China (More elaborate recount of current Ukrainian governments China favoritism).

This behaviour is very odd and raises a lot of eyebrows, considering that China has a history of voting against Ukraine on matters that are important to Ukraine. 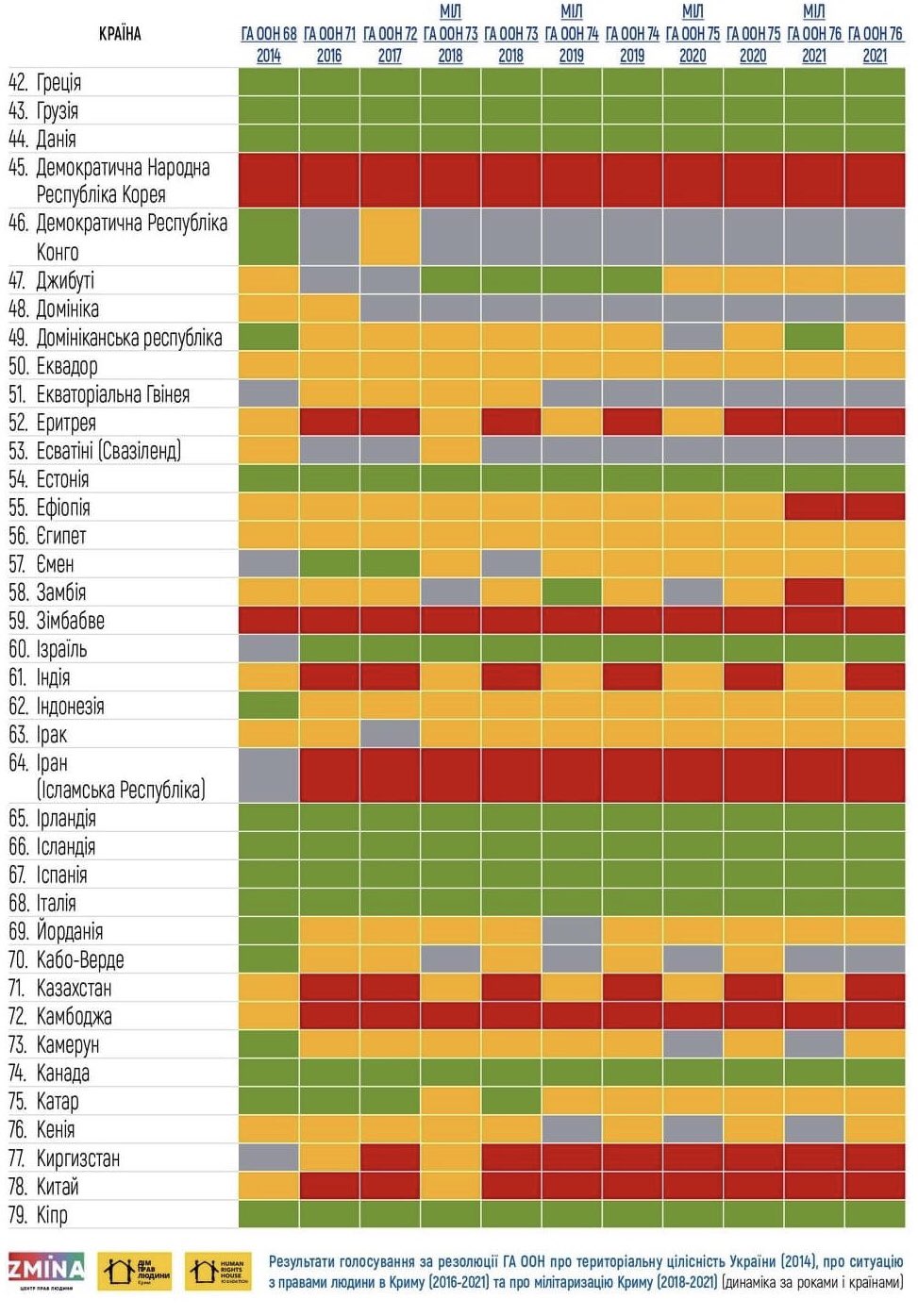 The image above indicates Chinas UN voting pattern regarding Crimea, which is another issue that involves both Ukraine and Russia. (China is under the number 78 on that list).

Now let's take a look at China-Russia relationships. The trade turnover between both countries in 2021 was $146.88 bln. Just like current Ukrainian government, politics wise, Russia seems to be favorable towards China, so much that they "leased" some parts of Russia to the Chinese (Source). Not only that, but China seems to be interested in having Russia as a gas supplier via the "Sila Sibiri" gas line (Source).

So where does this bring us? China has economical interests in both countries, which is clearly illustrated by the everincreasing trade volume. China also has political interests in both countries so what China does in this situation is attempting to stay "neutral": not breaking their relationship with Russia but also ensuring that their political and economical developments in Ukraine remain. As if to whether they are siding with anyone...well, it's no secret that China is the largest trading partner for the U.S. so make of that what you will. Rhetorics and claims wise on this issue, China is most likely going won't change the hostile stance towards the US that they have developed over the years (among with the constantly rising trade turnover with the US...), but will mostly likely try to find a middleground between Ukraine and Russia (their relatively new economical/political development and the existing one).

The answer to the title question is 'yes'.

China has thrown its political weight behind Russia as fears of it potentially invading Ukraine grows, pointing to Moscow’s “legitimate security concerns” in a call to US officials.

“All parties should completely abandon the Cold War mentality and form a balanced, effective and sustainable European security mechanism through negotiation,” China’s top diplomat said on Thursday, according to a foreign ministry statement.

In a nod to Moscow’s concerns about the expansion of the NATO alliance in Europe, Wang added that “regional security cannot be guaranteed by strengthening or even expanding military blocs”.

China is on Russia's side. There are mainly two reasons. First, China is happy to take any opportunity to get back at the US for the tariffs on imports from China, on our words and actions regarding China's treatment of Uighur's Muslims, our not wanting to recognize China's sovereignty on the South China Sea, and much more. Second, China has itself a problem with what it considers a renegade province (Taiwan), and may consider using military action someday where they might need Russia's support.

Not the answer you're looking for? Browse other questions tagged united-states russian-federation china international ukraine .

3
In what ways will the Russian-Ukraine war benefit/harm the United States?

4
Has Ukraine implemented section 11 of the Minsk II agreement?
0
Why does the US state interest clash with Russia's and China's but not with other big guns in its alliances?
4
Will Russia's naval exercise prevent civilian sea traffic to and from Ukraine?
3
How do Russia's military options in Ukraine in 2014 compare to the present day?
5
What would China gain by confronting Russia for what it's doing in Ukraine?
4
How does China square its doctrine of "non-interference in internal affairs" with tacit support for Russia's invasion of Ukraine?