What are the potential strategic/economic gains of China for taking over Taiwan (with military invasion or not)?

My question is not about the net gain that China could have for occupying Taiwan. I understand with military invasion, China has to undertake huge financial and human resources cost, suffering from high inflations and very hash sanctions from Western countries. Such cost may be likely much bigger than its gains.

To many people from China, taking over Taiwan is believed to bring a great glory to the country. But what about the benefits from the perspective of utilitarian? What the potential strategic/economic gains China could have after taking over Taiwan (with military force or not).

One possible benefit I am sure of is that if there is indeed a military invasion, PLA will gain real battlefield experiences, which may be helpful for building up its confidence in confronting U.S and Japan. P.R.China hasn't engaged seriously in a war for decades.

(1) Taking control of Taiwan Semiconductor Manufacturing Company and put China into a huge advantage in high-end chip making. But I guess if there is a threat of war, Taiwanese chip makers will flee to other countries with their technicians and money?

(2) Breaking through the First Island Chain? Does taking over Taiwan change the military balance between China and U.S.?

The major advantage is not the occupation of the island, but the tension, the cold war like situation that allows restrictive measures and controlling the local population. So, for the solidity of the position of the current leaders of the communist party, it is the threat of an invasion that has a strategic advantage, not an invasion itself. To change the status quo is not in their interest.

Taiwan is located very strategically in the middle of the island chain that restricts China's sea access. The ships can pass between the islands, but they make for a good place to fire missiles from, the passages can be mined, and so on - a navy in blue water is a lot less vulnerable. 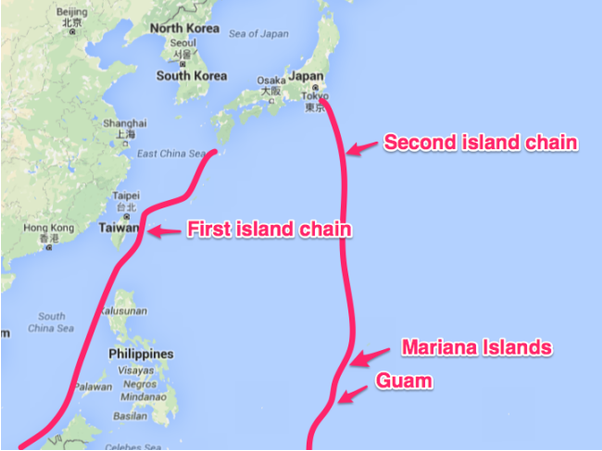 By subduing and integrating Taiwan, China can gain:

The main difficulty for China in taking over the ROC is the risk of US involvement. Taiwan explicitly advertises itself as "A sea fortress against China", implicitly a fortress for the US. Should the West be distracted with another major war, however, China might take the plunge.

Currently, the US is bound by treaty to help Taiwan in such an event. This is the main barrier keeping the PRC at bay. In case the balance of power changes, such that the US won't risk a war with China, the ROC still maintains one of the strongest navies in Asia.

Should it be defeated, Taiwan's island status still makes a direct military invasion difficult. The PRC's main option would be a blockade.

If blockaded, Taiwan doesn't have the natural resources to be self-sufficient. Once they establish the blockade, the PRC would just have to cut the power and oil supplies, then wait for the peace treaty - preserving the semiconductor infrastructure and the population.

One strategic advantage that to my knowledge China is claiming to desire is better open sea access. They fear that in a hypothetical conflict with the US the Chinese navy could easily be blocked from accessing any oceans that are not close to the Chinese coast. I don't know how relevant that is both from a point of realism of the scenario and from current military strategy but if you look at a map one can construct the following argument.

Starting from the north of the Chinese coast there is only a small straight between South Korea and Japan. There is an entire chain of Japanese islands down to Okinawa which has a major US military base. Starting from the south the Indonesian archipelago is full of small islands up to Luzon, the northernmost major island of the Philippines, followed by a chain of smaller islands.

Now if in this scenario you count Taiwan as hostile to China you get an essentially continous chain of islands between China and the Pacific ocean. If on the hand Taiwan were part of mainland China then it would be the main access point to the Pacific ocean and from there to the rest of the world.

10
Why is Taiwan strategically important to United States (besides being dominant in the semiconductor manufacturing)?
3
What is the role of Taiwanese semiconductor industry in Chinese and American policy regarding Taiwan?

7
If Taiwan declares independence, would that mean they are relinquishing their claim over mainland China?
3
What are the intrinsic consequences of not officially recognising China?
26
What is the rationale of Lithuania allowing a diplomatic mission under the name of Taiwan, thus deteriorating the diplomatic relation with China?
11
Why would China not invade Taiwan given that the US did not send troops to Ukraine? What is different in these two geopolitical situations?
10
What are Taiwanese required to do and sign to travel to China? Can active, reserve or retired military do so?
28
What has China gained by doing military drills after Nancy Pelosi's visit to Taiwan?
5
Under the confrontation with China, can Taiwan strike first but still obtain the military support from U.S. (base on whatever agreement between them)?
4
What do Taiwan independence supporters want to do with the areas controlled by the ROC that aren't part of Taiwan?