Why did EU fail to reduce their dependence on Russian natural gas?

The conflict in Ukraine is escalating and new sanctions are being announced. Some of the news are arguing about the EU's significant dependence on Russian gas.

The following graphic indicates that the EU did not manage to significantly reduce the dependence on Russian gas (source, page 13): 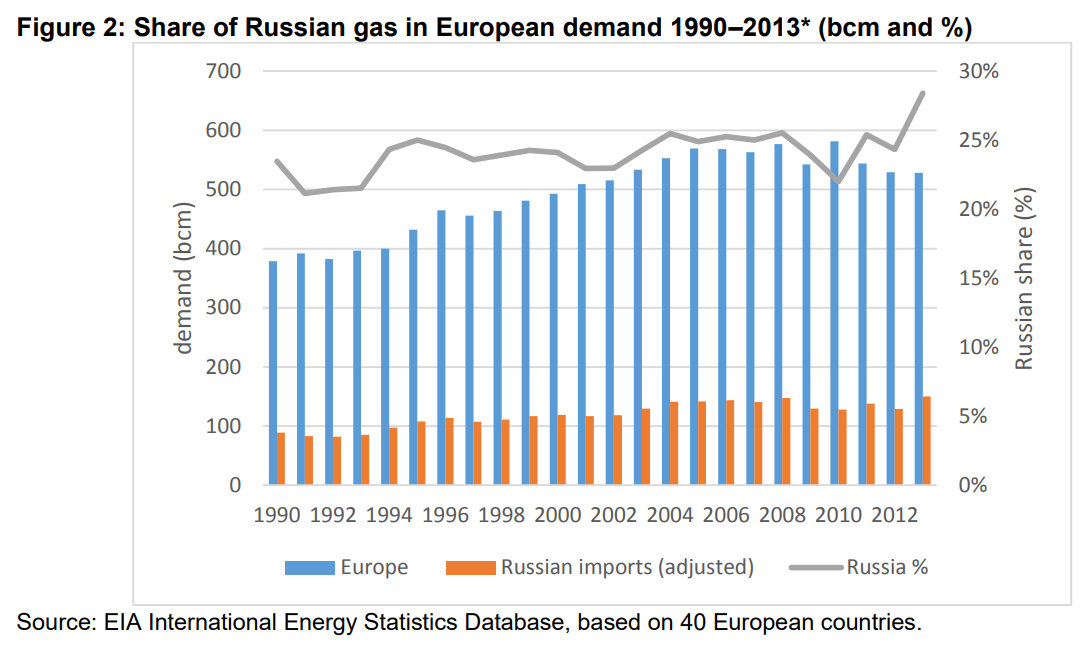 The graphic does not indicate recent values, but this article indicates that Russia continues to supply around 40% of EU gas consumption.

Despite the fact that Russia became more and more aggressive (clearly visible in 2014, when it annexed Crimea).

Why did EU fail to reduce the Russian natural gas dependence?

There have been attempts. For example, consider the Trans-Adriatic Pipeline, constructed from 2016 and completed in 2020 to transport natural gas from Azerbaijani fields into Europe without touching Russia. These attempts have not even been new, as is exemplified by the Nabucco Pipeline, the agreement to which was signed in 2009, well ahead of the current timeline of Ukraine-Russia skirmishes. (Nabucco was ultimately ditched in favour of the TAP.)

There are a few problems though:

If you take a look at the blue bars, gas demand as a whole has stabilised since about 2005 and is tipping downwards, so it looks like the long-term strategy is slowly starting to bear blossoms that might become fruit one day. But this isn't a switch that can be done in a day and the share Russia supplies is simply too large for quick action.

Basically Europe depends on Russian supplies because there are no other options. The choice Europe made to transition to gas is also a choice to depend on Russia.

A lot of comments to this post claim that the ongoing transition is from coal power to gas power. That is not correct, coal is only part of the picture. In Germany the transition is from coal AND nuclear to Gas. In France the Nuclear power plants are aging and too few new ones are being built, part of the gap will be covered by Gas. In Italy the transition is from Oil fired to Gas fired power plants. The ongoing transition is officially confirmed by the EU commission decision to include gas in the climate mitigation plans and it will impact also the other countries replacing Nuclear, Coal, and Oil. So the demand is bound to increase while the production from alternative countries is declining. New Gas fields have been found in the Mediterranean sea, but it is not enough. The real problem is not the current dependence from Russia, but the future dependence from Russia.

Europe was balancing different priorities. Those apply to different degrees in different countries. The goal is to be climate-neutral by 2050.

So where would the gas come from? One option is to import LNG, but liquefaction increases the climate impact. Another option is to buy from Russia.

Even during the Cold War and in the run-up to the Ukraine crisis, Russia had fulfilled their long-term contracts with the West. Russian energy blackmail came into play with countries which used to get discount prices, and could not pay the full market price.

Note: I readily admit that cannot provide sources for my claim — I simply don't have time today. But I don't see this important reason in the other answers, and it is, as I believe, central.

Economic cooperation and interdependence between Russia and Western Europe was considered one important puzzle piece and condition for peaceful coexistence.

This concept informed especially West German policies long before the fall of the USSR. The "Entspannungspolitik", the specific Détente between the two Germanies and the western and eastern block generally, was not only political. The economic cooperation that had developed during the Cold War period gained steam afterwards, as the economic charts show.

The idea was to make war prohibitively expensive. As a side effect, misled rulers would have a hard time to spin reasons for a war with a factual ally and collaborator with whom many citizens have economic and touristic direct relations. The European Union is a good example that this strategy can work, even if the current Russian war against Ukraine is a clear failure: Never in thousands of years, I think, have Germany and France lived as peacefully and prosperous side by side as during the post-war European economic and political integration. The current state of affairs would have been plainly unthinkable in most of the modern times.1 For centuries, France was considered Germany's arch enemy, the "hereditary enemy", and vice versa. Who would have thought, generally, that the imperialistic Germany, since its modern inception plagued by delusions of national grandeur and outright paranoid conspiracy theories, could be an central part of a united Europe, a peaceful hub in a tightly integrated web of peaceful and fruitful interdependence.

The post WW II European integration strategy was uniquely successful and beneficial to all involved.

It took Germany only 20 years after WW II to become a peaceful keystone of the European integration.

It's obvious that delusions and paranoia are what's plaguing Russia today. Equally obvious is the central role Russia with its huge natural and human resources and rich culture, science and technology could play in an economically and politically integrated Eurasia. Chances are I live to see that.

If anything, Russia's economic ties to Europe were not strong enough, a failure of epic proportions.

1 And I side with Steven Pinker that we tend to underestimate the enormous progress we have made. The current peaceful integration of Europe is a historical miracle to behold, a unique achievement of monumental importance. We must cherish and nurture it. We must under no circumstance squander it. Previously, integration on this scale was always achieved by violent imperialism of different flavors, from Rome to Napoleon. Disintegration was the typical state of affairs though, with frequent catastrophic war events as conflict solving strategies.

According to Jonathan Stern, head of the Natural Gas Research Programme at the Oxford Institute for Energy Studies in the UK, there is no alternative to Russian gas, especially after the Netherlands stopped producing gas because of the economic losses inflicted to a large swath of its population living close to the Dutch gas fields.

Switching from natural gas to an existing and equally convenient energy source is not possible, as such an energy source does not exist. Switching to a much less efficient energy source is equally not possible with the current boundary conditions, because in the last 15 years the EU decided to go back to the Middle Ages, by promoting austerity economic programs, while major changes in the way the economic system works necessarily require huge public investments.

It was expected that by earning lots of money from Europe, Russia will value good relations, successful trading contracts, and will see no reason of engaging into conflicts that would cost money. Hence the approach was considered safe enough (source)

It is a restatement of Norman Angell’s pre-WWI theory that the new interdependence of economies makes war unprofitable and thus irrational. This somehow did not work as expected.

The Poland was entrapped behind the iron curtain and has a deep resentment of Russian power, but they still had Russian oil infrastructure, that is changing:

It's Saudi vs Russian oil, out of the pot into the frying pan.

Continental European powers have been a natural allies to avert mutual local threats and against major powers like France was, and have complex ties with Britain and the English-speaking world. Allegiance against the French and in NATO/EU, and total war in WW1 and WW2 due to complex issues like the naval race of the late 1800's, which Prussia contested against Britain.

For example, The Russo-Prussian alliance signed by the Kingdom of Prussia and the Russian Empire on 11 April 1764.

The Reinsurance Treaty, (June 18, 1887) was a secret agreement between Germany and Russia arranged by the German chancellor Otto von Bismarck.

Dreikaiserbund, English Three Emperors’ League was an alliance in the latter part of the 19th century of Germany, Austria-Hungary, and Russia.

Also the toll of 19 million lives in WW2 perhaps makes Germany feel like it has a debt to Russia.

The annual trade between Russia and Germany is 25 to 45 billion. 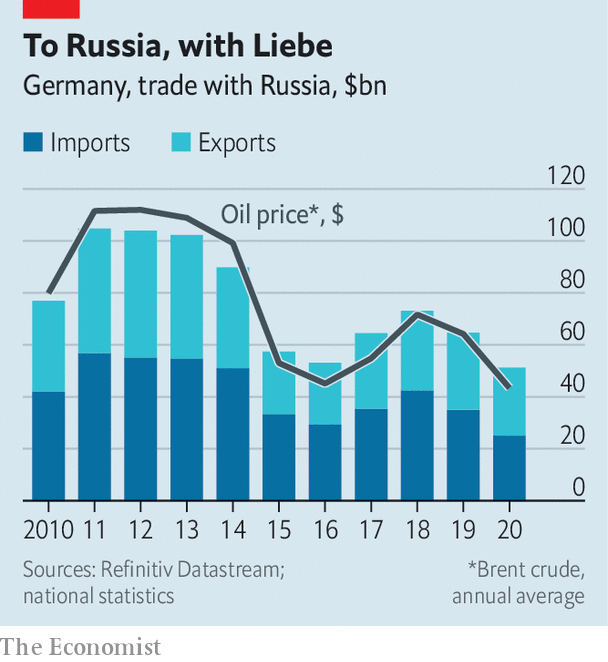 Honestly, Putin is acting like a paranoid, isolated and belittled mad dog leader intent to show his strength... Lest there be the question: who coerced him to act paranoid, belittled and isolated?

Perhaps a simple friendly series of pacifist statements by Biden would have saved many lives, in the last 12 months of alarmist enmities on both sides.

Recall that Britain led a war with Russia over Crimea in the 1850's, which cost 250,000 lives. The continental/maritime natural power alliances haven't changed very much.

Cooperation with Russia is facilitated by the ruling elite that has considerable ties with Putin's regime. The larger countries include Germany and France, plus smaller players such as Hungary and Croatia.

REFERENCE: Who are the allies of Vladimir Putin and Russia in Germany?

30
What plans do European countries have if Russia closed gas pipelines to them?
12
Why does Germany seem to not favor EU energy independence (from Russia)?
44
Why did Germany hurry to phase out nuclear energy usage increasing the risk of fossil power use and Russian gas dependency?
3
Why was Gas Interconnector Greece-Bulgaria delayed so much?
6
Why is Ukraine not stopping the transit of Russian gas in the context of its demand to boycott Russian gas?
3
How much natural gas does France import from Russia?
9
How is Ukraine getting their gas since the Russian invasion?
23
Russian gas delivery stop — difference between Poland/Bulgaria and other EU customers?
35
Why is Russia limiting its gas supply to the EU instead of stopping it altogether?