Has any nuclear-protected country been under any significant attack by another country's military forces?

Countries can have nuclear weapons of their own (e.g. Russia, US) or be protected by them through alliances (e.g. Baltic states via NATO, Belarus via Collective Security Treaty Organization, Warsaw pact countries under USSR).

India most likely completed weaponized nuclear warheads around 1994 and tested them in 1998. Pakistan also tested their first nuclear weapons in 1998.

Both had a war in 1999, the Kargil War that lasted almost three months and resulted in a few hundred (official figures) to a 1000-2000 (claims) casualties on each side.

So, for your question they both would count unless you think that is not significant enough.

As another potential case: Israel is widely believed to have nuclear weapons since ~1960-63 and was since then involved in the Six-Day War, the War of Attrition , the Yom Kippur War, Lebanon Wars, Intifadas, Gaza Wars and some smaller stuff like being bombarded by missiles from Iraq. For a list of all involved countries see this table.

So if you believe that Israel really has nuclear weapons and is a nuclear-"protected" country, then Israel would definitely be such a country.

The Falklands War ("a ten-week undeclared war between Argentina and the United Kingdom in 1982 over two British dependent territories in the South Atlantic: the Falkland Islands and its territorial dependency, South Georgia and the South Sandwich Islands"), would probably qualify.

While this war was undeclared, it was without a doubt significant. This war from 40 years ago, is the most notable episode of active naval warfare that has taken place in the world in the time period after the Vietnam War. Wikipedia sums up the casualties and losses of the parties to the war (the left column is the U.K., the right column is Argentina): 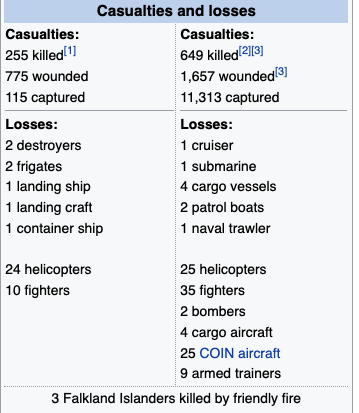 Perhaps Israel... or perhaps not, as it adheres to the policy of nuclear ambiguity, neither confirming, nor denying that it has nuclear weapons.

If Israel did have nuclear weapons, then the first nuclear tests would have been carried out somewhere in early 60s - that is before some major military engagements: in 1967 (Six Days War) and 1973 (Yom Kippour War), as well as a slow-burning War of Attrition in between.

1973 was certainly a significant attack, whereas the war of 1967, although technically started by Israel, is widely considered as a pre-emptive action against an imminent attack.

The Sino-Soviet border conflict was a seven-month undeclared military conflict between the Soviet Union and China in 1969, following the Sino-Soviet split. The most serious border clash, which brought the world's two largest communist states to the brink of war, occurred in March 1969 near Zhenbao (Damansky) Island on the Ussuri (Wusuli) River, near Manchuria. The conflict resulted in a ceasefire, which led to a return to the status quo.

I think the 9/11 attacks on New York City and Washington DC qualify here as well. Yes it was not an attack by an other country, but is was an attack, it did result in war and most, if not all, NATO allies supported the US during the attacks on Afghanistan, the Taliban and Al Qaeda that followed these attacks.

Not the answer you're looking for? Browse other questions tagged armed-conflict history nuclear-weapons .

12
Has the US President ever been denied entry to a foreign country?
9
Do any treaties include punitive damages from a nuclear attack?
17
Why would North Korea attack the United States or a neighboring country with nuclear weapons?
18
Does nuclear propulsion applied to military ships fall under civil or military nuclear power?
9
Is there any international convention/treaty/protocol that regulates how a country should behave if a nuclear incident happens on its territory?
35
Will a nuclear country use nuclear weapons if attacked by conventional means by another nuclear country?
2
Why doesn't any nuclear power country which is supporting Ukraine hand them a Nuclear Bomb?