What determines whether Western countries (and NATO) recognize separatist movements? (especially when comparing Kosovo and the Donbass)

Now, the Western countries in general and NATO in particular, could either recognize the separatist region, or refuse to do so and support the government. In case of Kosovo they did the former, in case of Donbass they did the latter.

What is the cause for these cases to be handled so differently? Yes, in the latter case one might argue that they are in a rivalry with Russia and refusing to recognize those regions opposes Russian interests, but are there other reasons?

(please note that I'm not asking whether the decisions in case of Kosovo and in the case of Donbass are right or wrong, ethical or unethical. I'm only asking for the reasons these decisions were made the way they were made, regardless whether we agree or disagree with them. The question is aimed to further a better understanding of this decision making process)

See, for instance, the split of Czechia and Slovakia. Czechs and Slovaks were distinct, a reasonable border could be drawn between them, and they agreed to split. Accepting that was obvious.

Next, take Kosovo. A previously autonomous province of Serbia within Yugoslavia. After the fall of Communism, many constituent parts wanted out, like Croatia and Slovenia, and the perception was that the Serb nationalists were hijacking the Yugoslav state. After bloody wars, those constituent parts got away, and many people in the autonomous provice felt persecuted by the Serbian authorities. So the West supported their independence movement, but much more reluctantly than for Croatia or Slovenia.

Finally, take Donetsk. It is not clear that there is a "Donetskian People" distinct from either Ukrainians or Russians, it is unclear where their desired borders start and end, and they are perceived as acting under Russian control. The short-lived Autonomous Republic of Crimea is on Western minds.

I've heard that, while definitely not recognizing them, France smuggles a lot of help to Basque separatists in Spain (France also has some Basque territories in it, but no separatism for some reason).

So if we are cynical, support of separatists is almost always a proxy war. Countries do whatever will strengthen their position as they see it.

I can say only about Kosovo, since I don't have enough knowledge about Donbass.

The thing is, Milosevic, who was the president of Serbia at the moment, already had wars in his resume, which nobody liked. Not the population of his country, not the West.

Then, we come the the period of 1998/9, which was full of really bad doings, both from the Albanians, and from Serbians. NATO, or to be precise KFOR, was established as a peace-support operation and derives its mandate from the UN Security Council Resolution 1244 and international agreements. This was a perfect moment to show up, and set their bases, as well as political and military influence in Balkans, which they really needed, since at that moment, there was not much countries that were in NATO, in the Eastern Europe. Albanian people in Kosovo cheered this move, because they really needed help in the war against Serbs.

Another thing is that, Kosovo is extremely important in terms of trafficking drugs and weapons, as well as in money laundering. So basically, West would give Kosovo "freedom", and Albanians would give money and influence back.

One could say that this was mutual benefit relationship.

It's worth noting that Putin has made it very clear he's recognizing the claim of the LPR and DPR to the entire Ukrainian oblasts LPR/DPR claim belong to them, even though they (LPR/DPR) control less than half of the territory they claim!

Speaking to reporters on Tuesday, Putin said Moscow had recognised the independence of Ukraine’s separatist regions within their administrative borders, including territory controlled by Kyiv.

Along with many other concerns, Russian President Vladimir Putin's quickly implemented decision to recognize the separatist entities Moscow supports in eastern Ukraine as independent states on February 21 immediately raised this question: What, exactly, has Moscow recognized?

When the Russia-backed separatists seized swaths of land in the region known as the Donbas in 2014, they drafted unrecognized "constitutions" that claimed dominion over the entire territory of Ukraine's Luhansk and Donetsk provinces, or oblasts, a total of more than 53,200 square kilometers.

Following months of intense fighting and a February 2015 cease-fire deal that failed to end the war between Kyiv and the Russia-backed forces, the two sides were separated by a line of contact that left the Ukrainian military in control of about two-thirds of that territory, including the important Azov Sea port of Mariupol. The separatists hold the other third, including the two provincial capitals, Donetsk and Luhansk. [...] 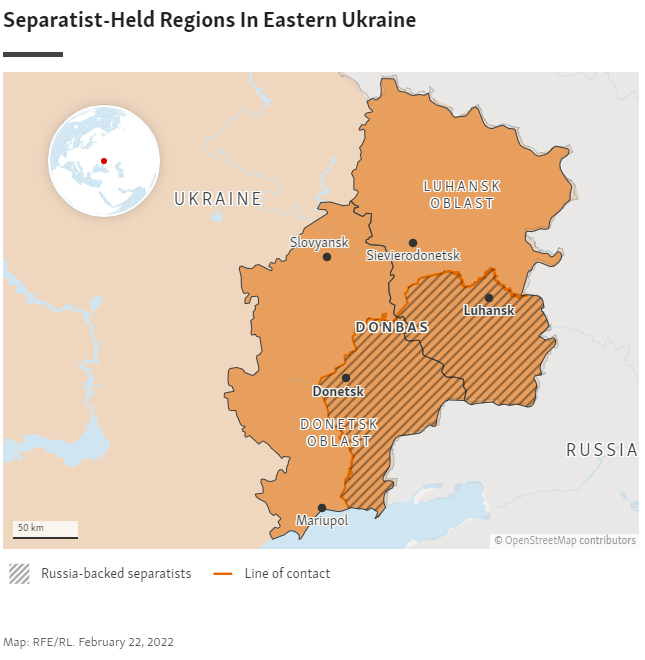 Late on February 22, however, Putin clarified that his recognition of the separatists did, in fact, include their territorial claims, potentially throwing open the door to further military conflict with Ukraine.

Which only took a few more day to erupt, although there's every indication that Putin had already made its mind to invade as e.g. the meta-data of his later-broadcast "special military operations" speech actually coincides with the date of the recognition speech.

So it's a bit like the US recognizing Taiwan's claim over mainland China and launching an invasion of mainland China to back that up with US boots, or something like that (scale issues aside).

The EU & NATO countries that did recognize Kosovo (which is most but not all of them) had the sanity to not recognize Greater Albania or similar pan-nationalist aspirations.

Not the answer you're looking for? Browse other questions tagged nato secession western-world donbass kosovo .

13
Why did the LPR and DPR in Donbas not form one People's Republic?
9
Legal basis for self-determination vs. territorial integrity

51
Why and since when did Russia stop integrating itself into the Western community?
18
Why did the former SSR countries like Lithuania, Estonia, and Latvia face no trouble joining NATO and EU?
5
What is the defense spending obligation for NATO countries this year?
58
What have the US and NATO done in Afghanistan for 20+ years?