At the beginning of the war in Ukraine, which U.S. forces were immediately ordered to pull back, and from where?

When the Russian invasion began in earnest last week, U.S. forces in the region were immediately ordered to pull back from the war zone.

“As soon as the Russians did what they did, we had to get out of the way,” said one of the U.S. military officials in Europe directly involved in the planning.

That included redirecting a “pretty robust” operation of spy planes and drones flying over Ukrainian airspace, the official said.

Now, the U.S. Air Force is relying on high-flying aircraft over Ukraine such as the U-2 spy plane that can avoid most anti-aircraft missiles and drones because there is “a little bit more risk tolerance for that.”

“One of the things we don’t want to do,” the official said, “is provoke a conflict with the Russians directly.”

I understand that having a US aircraft shot down by the Russian military is something that could lead to escalation, but were there other potential targets that needed to be "pulled back" as well?

It may have been:

160 members of which deployed in November last year.

training and advising and mentoring Ukrainian armed forces. The troops, assigned to the 53rd Infantry Brigade Combat Team, are part of the Joint Multinational Training Group-Ukraine. 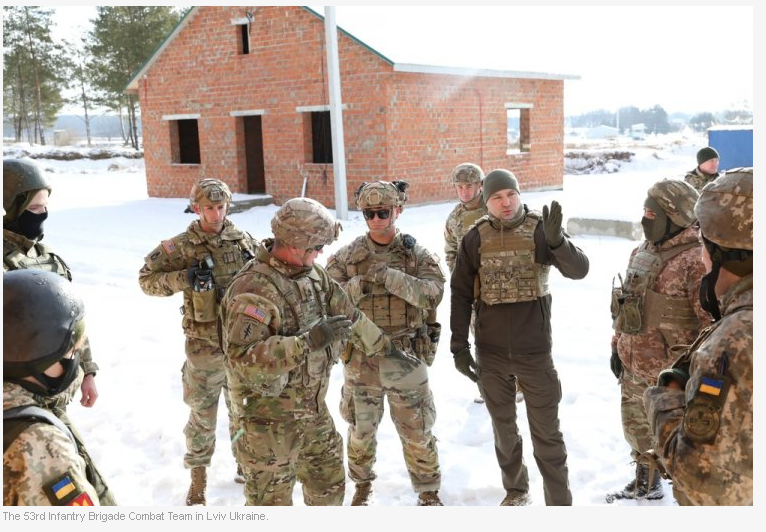 “currently serving there in an advisory or ‘train-the-trainer’ role with the Ukrainian Armed Forces at the Combat Training Center-Yavoriv,”

He declined to say how many American troops are currently deployed to Ukraine, citing security concerns.

And Ukraine’s defense intelligence chief has said its ground forces have been firing U.S.-provided Javelin anti-tank missiles at Russian or Russian-backed forces.”

That also fits in with the drones info:

the unit is comprised of two teams, the launch recovery section and the operations section. The unmanned aerial vehicles are the Shadows, which combined with the launching system, its operators and maintainers, make up the complete unmanned aerial system.

The Shadow’s types of missions include military reconnaissance, forward observation and using them as a first responder.

Soldiers from Company B, Special Troops Battalion, 53rd Infantry Brigade Combat Team are spending weeks in the field .. flying, testing and maintaining a fleet of four aircraft which will provide commanders with valuable reconnaissance, surveillance and target acquisition capabilities.

“The Shadow Unmanned Aerial System will be a valuable asset for the Florida National Guard,” said Col. Perry Hagaman, the state aviation officer. “The ability for ground commanders to operate within their own three-dimensional battlespace will greatly assist units such as the 53rd Infantry Brigade Combat Team in conducting their federal mission.”

6
What is President Trump's first public reaction to Turkey's invasion into Northern Syria against his stark warning?
1
Has Pence essentially granted Kurdish Syrian territory to Turkey, subject to Russian approval?
6
When the US government activates a Civil Reserve Air Fleet (CRAF), can it activate the civilian crew as well, or are they always volunteers?
1
Size of Russian forces including the National Guard deployed (and lost) in Ukraine
5
Where are the weapons and ammunition used by Russia coming from?
8
When did the war between Russia and Ukraine start, and why?
4
What reasons were given for the region-based funding of Russian recruitment/mobilization drives?