Suppose an arms shipment is being delivered by country X, and just crosses the border of country X and Ukraine's border. If the Russian destroyed the shipment, and there were casualties, would that be an act of war against country X then?

First, weapons can be delivered through Poland:

Reznikov (Ukrainian Defense Minister), in his video, tried to provide an answer. “You may deliver it to Poland,” he told potential donors. “From there, we will transport them across the land.”

Delivery via Poland leaves Putin with 2 possibilities: attack Polish soil. And therefore NATO. Or extend his invasion to cover the Polish border areas, which is a lot more than most analyst expect him to have targeted at the beginning because it forces Russia to occupy all of Ukraine, more or less indefinitely.

Second, yes, it's an escalation. No doubt.

But an escalation in what?

With regards to Ukraine, Putin has already invaded. He's not going to "double-plus invade" because of those weapons. They are also, very deliberately, defensive weapons in nature. Anti-tank missiles, surface to air missiles, etc... The kind of gear that allows infantry to engages armored vehicles and ground support aircraft.

A country can't invade another with what's being delivered to Ukraine.

There's chance those weapons, and the courageous self-defense they are used for by Ukraine, will prod the Russian army to abandon its relative restraint in attacking cities and civilian areas. There's already a sign of that happening in Kharkiv today. That's on Russia though, just on Russia. They decided to invade, they decide if they want to be even more ruthless. They'll probably win, in the short term, with the numbers and gear they have. But every extra bit of violence makes it less likely that they will ever be accepted by Ukrainians.

It would be irresponsible and immoral for the West to use Ukrainians as "proxies" to weaken Russia. But it really, really, doesn't seem to be case here. Ukrainians genuinely do not want to be part of Russia's "near abroad" again and are only asking for weapons to defend themselves. In 2014, the West decided to cool things down and let Putin have his way in Crimea and Donbass. It seemed like a reasonable, if weak and timidly convenient, calculation at the time. It hasn't turned out that way, strictly due to Putin. Even now, analysts struggle to articulate an actual Russian-positive endgame to this, even if they win. No one really understands why Putin gave the invasion order on the 24th.

With regards to risking Russia-NATO conflict? Yes, there is a real risk there.

On the other hand, there is a real risk that not pushing back on Putin's Russia will embolden it to perform some other stupidity in the not too distant future. And, as others have remarked, the Cold War did see numerous events which involved supplying nations or groups fighting against one of the big powers.

Then, again, when even Switzerland doesn't like you, you know you're not the most popular guy around.

If Putin's dream is really to go back to the golden days of the Soviet Union, why the Warsaw Pact era map looks mighty uncomfortable doesn't it? Are these countries all part of the fellow Slav brotherhood so dear to Putin? 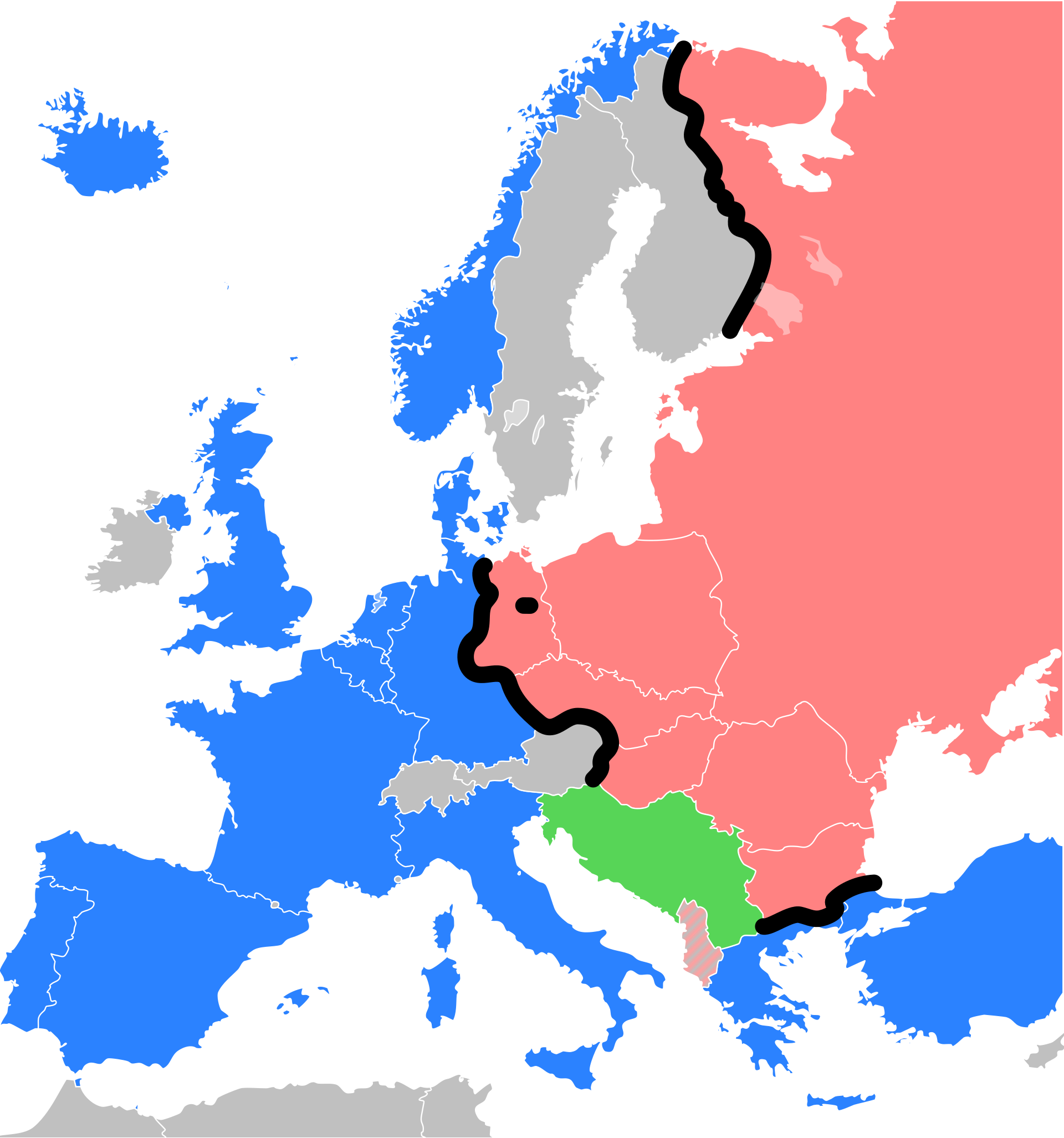 Also, looking beyond Russia, which, for all its bluster and ruthlessness, is pretty much a has-been Great Power, except for its nukes, the West is also playing to the audience of China, a potential future adversary with considerably more potential. Not taking risks in supporting Ukraine now will make it difficult to negotiate any kind of equitable agreement with China say 20 years down the line. They will expect weakness from us and will act accordingly.

At some point China will become stronger than the US. If Western countries do not want to be controlled by the likes of people who run concentration camps for Uyghurs, but instead want to have a stable world where countries have real independence, might be worth to show some spine now.

so sending weapons to Ukraine isn't breaking 'international law' (I know it's irrelevant, but can be used as an argument from the Russian side)

In general, sending weapons isn't prohibited under international law. Some exceptions are made under the recently adopted ATT, which prohibits certain transfers, like those proscribed under some UNSC embargo or if the weapons are known to the shipper to be intended for human rights violations etc. Worth noting that Russia is not a signatory to the ATT, so them complaining that other countries might be breaking this treaty in some imagined way would be pretty laughable.

That a country (like Russia) might consider it casus belli that some other country is helping their enemy with weapons is a different matter.

As you probably know, during the Cold War, the USSR openly armed Vietnamese and Soviet pilots even fought in Korea, albeit less openly. Likewise the USA armed the Mujahideen etc., also somewhat openly. Yet WW3 didn't erupt then.

In general what international law there is is made up of "norms" (i.e. the standards by which countries with enough hard or soft power expect other countries to behave by) and treaties (formal agreements between pairs or groups of countries). In neither case is there a clear enforcement mechanism (there are a few international courts, but none is universally recognised to have true unimpeded global jurisdiction. Trade, including trade in conventional weapons between sovereign states certainly doesn't hit the first category, and would only interact with the second if one of the parties involved had a treaty (possibly with a third party) not to sell weapons (and the most common treaty of that sort would just say they couldn't sell them below their market price, but could offer generous financing).

Regarding acts of war (An act by one nation intended to initiate or provoke a war with another nation; an act considered sufficient cause for war.), these are whatever the country declaring war says they are, and have historically ranged from the relatively trivial to the effectively unavoidable. In fact, formal declarations of war have somewhat gone out of fashion, so now what matters most is whether the actions of countries increase or decrease the likelihood of their potential allies acting in concert with them

Weapons trade is not considered an act of war. So, while providing weapons is an escalation, it's not a military one. It's a political escalation. A better way to describe it is as an increased deterioration in political relations. Supplying weapons does not generally (in itself) turn the supplier into a warring party.

As all rules, this has an exception. The exception is if the weapons are nuclear. If any country places its nuclear missiles on the territory of another willing country, it has been de facto (even if not de jure) considered that whoever is targeted by these weapons has been targeted by both countries (the host and the manufacturer). The implications of this has (obviously) not been tested because no nuclear missile has ever been used as an armament in a war.

The business is: You give us weapons, we sacrifice our lives, and the war is contained in Ukraine. This is it, as D.Kuleba said .

The weapons are sent with the goal of de-escalation, to contain the war within the boundaries of Ukraine. If Russia would be allowed to win, Ukraine alone for them may not be sufficient, and the war may expand first into the Baltic states, then likely into the states belonging to the former Warsaw Treaty and who knows if not beyond.

As Liz Truss says, inaction would be the greatest provocation.

From Russia's (and its allies') point of view, of course sending Ukraine weapons is an escalation. In fact Western support ("Western goading" according to Russia) is the entire reason why there's a war in the first place. That's why you get memes such as this one mocking the situation.

Edit: Surprised the claim that "Russia views the West sending Ukraine weapons is an escalation" isn't obvious, but here's a source. Note the year it was published (2017).

"By providing Kiev with weapons that are more than just defensive, they will only add more fuel to the current crisis. Instead of supplying weapons, Washington should convince Poroshenko and his government to start implementing the Minsk agreements. This is the only way to start resolving the crisis," [Andrei Krasov] told Sputnik.

"Of course, this is a violation. Any weapons supply would violate the Minsk agreements because the conflict is underway and it cannot be settled with weapons supplies," he said.

The allegation is that by providing weapons, Ukraine becomes less willing to implement the Minsk agreements, and since there is no other peace solution on the table, war becomes more likely.

If the disputed claim is "Russia's allies view the West sending Ukraine weapons as an escalation", then here's another source. The headline just about says it all:

Not the answer you're looking for? Browse other questions tagged international-law ukraine weapons rules-of-war .

26
Why are Stinger (surface to air missiles) and Javelin (anti-tank missiles) not considered escalatory in war theater of Ukraine?
-3
Is armament considered an aggression in international law?

4
Have arms manufacturers and dealers ever been accused of or convicted of a war crime in the U.S. or by and at an international tribunal?
15
Does the shipment of large amounts of a variety of sophisticated weapons to Ukraine carry a high risk of retaliation or misuse for the senders?
3
How do Russia's military options in Ukraine in 2014 compare to the present day?
43
Is it politically acceptable to incentivize soldiers of another country to desert?
6
Mechanism and legal status of arms transfers to Ukraine
2
Any adverse effects/repercussions due to Ukraine's "serious snub" of German president Frank-Walter Steinmeier lasting longer than a few news cycles?