Why doesn't Russia object to Norway's NATO membership like it does to that of Finland, Ukraine, and Georgia? Is it because the border with Norway is much shorter and basically in the middle of nowhere high up north?

Norway has been in NATO from day one.

Russia's communicated grievance about NATO's actual and potential expansion concerns states admitted since the collapse of the Soviet Union.

Also, Norway's membership, with its geography, small population and total lack of cultural affinity with Russia is much less of risk and snub to Russian security and self-view than "losing" Georgia or Ukraine.

As to Finland, it had been pushed into an effective neutrality, one that it did not always appreciate much, during the Cold War. But while the circumstances of that neutrality were not always pleasant to the Finns, neutrality itself seemed broadly popular. For them to consider joining NATO is a strong indication of the lack of trust that Russia in its current state engenders in its neighbors.

Finland, while small, is also much closer to the major city of St. Petersburg.

Who says they don't? Of course, it's not on the same terms as for countries that aren't yet NATO members, but Russia objects to pretty much every NATO-related event in Norway, e.g. (you'll want to access the original for the embedded/supporting links, which are numerous):

In Russian framings of military activity, Norway often figures as merely one part of the US military system, a launchpad for potential US ‘aggression’. By late 2018, Norway was routinely described as one of many European sites for the NATO/US ‘bases’ that were ‘surrounding Russia’. Whereas NATO presented its large-scale Trident Juncture exercise in Norway in 2018 as defensive, with the overarching aim of demonstrating ‘the credibility of its [NATO’s] military deterrent and the unity of its membership’, the Russian side declared: ‘Even if NATO says otherwise, Trident Juncture is really preparation for a large-scale armed conflict in regions bordering with the Russian Federation’. When in May 2021, Tromsø opened a port for US nuclear submarines, the view of Norway as an arena of aggressive NATO expansion was reiterated, with the submarine port being the ‘next NATO outpost on Norwegian territory’. Moreover, Norway is increasingly construed as a hostile agent in its own right. Previous accusations that Norway was intentionally destroying good-neighbourly relations by giving in to US demands have been reiterated. Norway is seen as pursuing a ‘politicized approach’, ‘undermining confidence and predictability in bilateral relations’ and acting as if Russia were a threat in the North.

Other military events in 2021 have further cemented Russia’s worldview of NATO as ‘encroaching upon’ Russian borders after Crimea. In February/March 2021, four US B-1B Lancer bombers were sent for first-time temporary deployment to Ørland Air Station in central Norway. In a Russian MFA briefing, ministry spokesperson Maria Zakharova explicitly stated that this ‘decision by Oslo’ was seen as one action in ‘a whole chain of actions intensifying military activity in the high north and in the immediate vicinity of Russian borders’. Zakharova employed even stronger rhetoric when Norway’s defence deal with the USA was made public in April 2021: it was taken as yet another proof of Oslo gradually abandoning the policy of ‘self-imposed restraints’, in a manner ‘fully in line with the policy of military build-up and an active involvement of NATO in the Arctic’.

Official Russian statements on Norway also reflect the deepening view that NATO always says one thing but in practice does something else. When, in September 2020, Norway joined British and US ships sailing into the Russian economic zone, the Russian Ministry of Foreign Affairs expressed ‘serious concerns’, contrasting the ‘supposed’ aims of NATO’s and Norway’s actions (‘to support freedom of navigation’) with what the ministry presented as reality: a ‘general build-up of NATO’s military presence in the high latitudes’.

Others already outlined the key differences between Norway and Finland, both geographically, historically and also from a Russian perspective. I want to add the following. A local newspaper published the following map (that appeared in Pravda back in 2009). 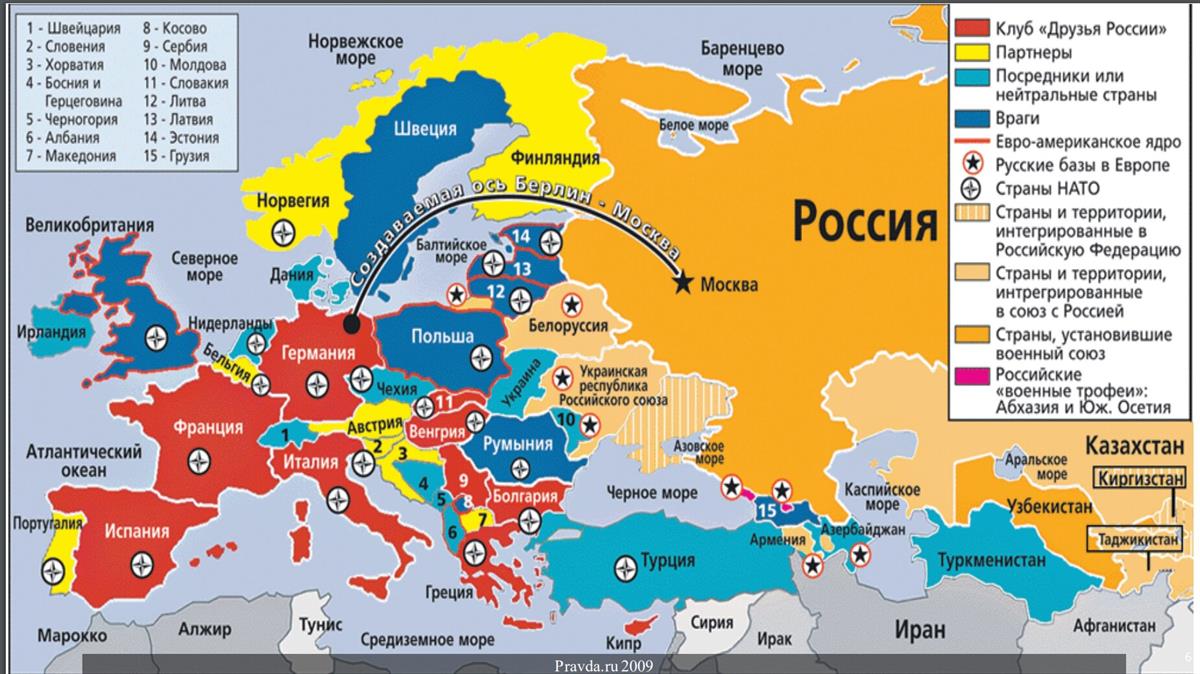 You see that it marks both Norway and Finland as "partners" (if I can at all read cyrillic alphabets).

Emil Jeřábek translated the other categories in the legend, see the comment (thanks). It is apparent that a Russian dream of future Europe is depicted in this map as opposed to the their view of the situation in 2009.

Interesting that Sweden, Poland, Rumania, Georgia and the Baltic States are listed as "enemies". The red category of "Club of friends of Russia?" feels like an optimistic way of looking at things. Possibly illuminating, nevertheless.

18
Why did the former SSR countries like Lithuania, Estonia, and Latvia face no trouble joining NATO and EU?

12
Was Russia really able to solve its 'Ukraine problem' by invasion?
19
Why would Russia care about NATO troops on its borders if it has nuclear weapons?
15
Does NATO have any obligation to defend Ukraine against Russia?
17
Why did NATO not extend to include Ukraine along with the Baltic States back in 2004?
37
Why doesn't Russia join NATO and what would happen if it tried?
36
How would Ukraine joining NATO affect Russian security?
3
How long did it take Warsaw pact countries until their NATO memberships were ratified?
20
Why can't Russia stop Ukraine from joining NATO by signing a treaty with a friendly NATO state?
20
Why did (most of) the European NATO members support Ukraine's aspirations to joining NATO?