Why is the Crimean peninsula so important for Russian trade?

One of the major reasons why Russia is stated to be so much in the need of controlling the Crimean peninsula, is that their economy is restricted due to having too few options for sea trade, having very limited access to the sea. The north is frozen for a big part of the year, and Vladivostok is too remote, therefore they need another sea trading option.

However, even if Crimea stayed in Ukrainian hands and they blockaded the Kerch Strait and cut off Mariupol and Rostov, Russia still has over 400 km of coastline on the NE part of the Black Sea. Is that coastline so unsuited for building a sea port (or expanding existing ones, like Sochi)? Why is control over Sevastopol (in terms of sea trade) so important for the Russians, so they risk a potentially very costly war over it?

Military importance
There are several reasons of the importance of Crimea to Russia, the primary of which is the Sevastopol naval base, which is the largest Russian naval base on the Black sea:

Economical importance
The OP suggest that Sevastopol is not indispensable for trade - this is correct, given that Russia still has a rather long Black sea coast line. Also, traditionally the trade in the Black sea was passing not through Sevastopol, but through Odessa (a Russian equivalent of Marseille), which is not in Crimea and still under Ukrainian control. However, any trade is largely dependent on presence of a military force, guaranteeing its protection, although this is arguably not the principal mission of the Russian Black Sea fleet.

Historical and cultural significance
Crimea was conquered by Russia from the Ottoman empire by Prince Potemkin (during the reign of Catherine II), in realizing the Peter I vision of Russian access to the warm Black sea.

Crimean war Several wars were fought in Crimea against Turkey and its allies, most notably the Crimean war, in which Britain and France militarily supported Turkey. This war is sometimes cited as the first mediatized war, as the war correspondents were present in place, and the photos were published in newspapers, and people were shocked by the explicit brutality of the war. Sevastopol is still a name of many landmarks, e.g., in France, in the memory of this war. Sevastopol sketches is a famous series of stories by Leo Tolstoy (the author of the War and Peace) about the war.

In less formal culture Sevastopol is well-known as a hot sea resort during the Soviet period (a kind of Russian Côte d'Azur), as well as for the wine making tradition - see Crimean wines. 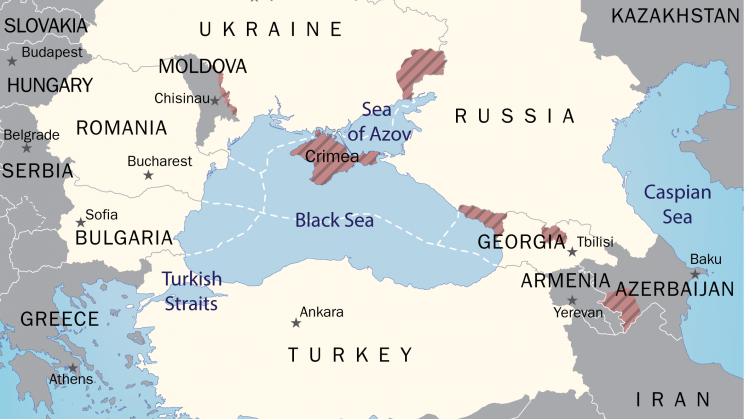 Some additional reading
Crimea's strategic value to Russia
What is Russia doing in the Black sea?
What makes the Black sea so strategically important?

Not the answer you're looking for? Browse other questions tagged russian-federation trade .

22
How many Russians say Alaska is rightfully theirs?
-4
Can the aggressions of Russia against Ukrainian territory be understood in a politico-historical light?

6
Sanctions for Russian military action in Ukraine stopping preparation for G8. Is it important for Russia?
17
Is the Crimean referendum legal?
5
Is popularity with the Russian public important for Putin?
9
Does the EU require preferential trade within itself?
10
Why is some Russian asbestos bound for the US stamped with Donald Trump's face?
2
Explanations for the large rebound in EU-Russia trade in 2017?
4
What's the shortest time a trade agreement has been put in place?