Is there any meaningful purpose in stopping selling consumer goods to Russia?

So, my newsfeed had an item about "H&M" stopping selling things to Russa, as well as a score of other random retailers (Nike? etc...).

I can sort of see the possible argument about efficacy of a (self) ban on Google or Apple's side, given their scale and impact in daily life of people.

But a random clothing retailer and such? Leaving aside pure posturing to generate good will with their Western customers, is there any meaningful purpose in stopping selling consumer goods to Russia? It seems counter-productive actually - if they sell to Russia, they hopefully syphon more hard currency out of Russia's financial ecosystem.

Both selling goods, consumer or otherwise, as well as buying Russian products, is an excellent way to make Russian citizens realize that a war is going on. You see, there is no independent media in Russia, none whatsoever. Over half of the population gets all the news from the state-controlled TV, which produces not news but propaganda.

I was born and raised in Ukraine and got my BS in Russia, and therefore have friends and relatives in both countries. As a child I lived in USSR, so I'm very familiar with how total propaganda works. Smarter people see the inconsistencies in the state propaganda, but too many people just believe whatever they were told.

This has been done many times, both by Nazi Germany and by Soviet Union to justify their wars in the eyes of its population. It's never "let's occupy Czechoslovakia and Poland", it's "let's protect our German brothers living there." It's never "let's occupy Eastern Europe", it's "let's help workers free themselves from capitalists." Or, as IMHO is likely to happen this or next year, "let's help Taiwan citizens in their unspoken desire to unify with China." If you completely control the media you control the perspective, no matter how made up it is.

And today many Russians don't believe that there is a war waged by Russia against Ukraine. They were told completely untrue propaganda stories of civil unrest in Ukraine that Russia allegedly has nothing to do with, and that Ukrainian Nazis are committing genocide of ethnic Russians, and that Russia has no option to protect its brethren other than a limited friendly peacekeeping action. All of it is completely 100% false, but many citizens of Russia has no access to media to contradict this bullshit, and so they believe it.

Ukrainians published a screen capture of text messages from a fallen Russian soldier's cellphone. A drafted soldier texting his mother that he's so scared that he wants to commit suicide; his mother reassures him that military exercises are not too dangerous and offers to send him a parcel from home; he replies that he's no longer in training, that there's a real war, that he is forced to shoot at both Ukrainian soldiers and peaceful citizens. As pointed out in comments, this story needs a reference, so here it is (as reported without the translation by vice.com): 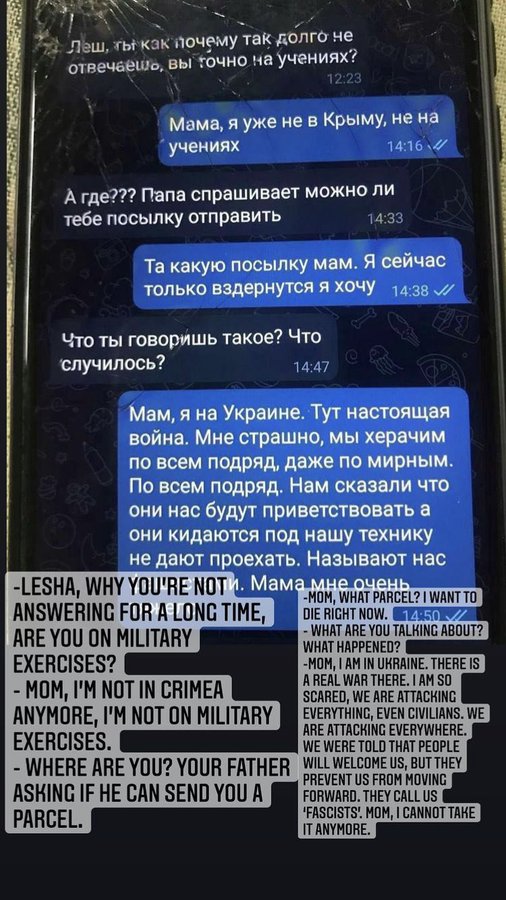 One way to get through propaganda is to his the shelves. No matter what TV says, if most goods have disappeared from the supermarkets you ought to know that something's amiss. If suddenly you cannot buy quality consumer products and have to settle for domestic (which is terrible in Russia most of the time) you take a notice. If, furthermore, you cannot buy even domestic because you business went belly up, you pay even more attention. The latter one is the reason why many American businesses halted imports from Russia.

Russians who have access to info are already fleeing Russia. Somebody traced paths of planes belonging to Russia's oligarchs. Most of them fled Russia within days of invasion, but not after loosing like half of their investments. Economic pressure is effective; halting business in both direction makes people reconsider their options. Per comment, here's the source about oligarchs fleeing Russia; these are tracks of oligarch's planes flight paths (from townandcountrymag.com): 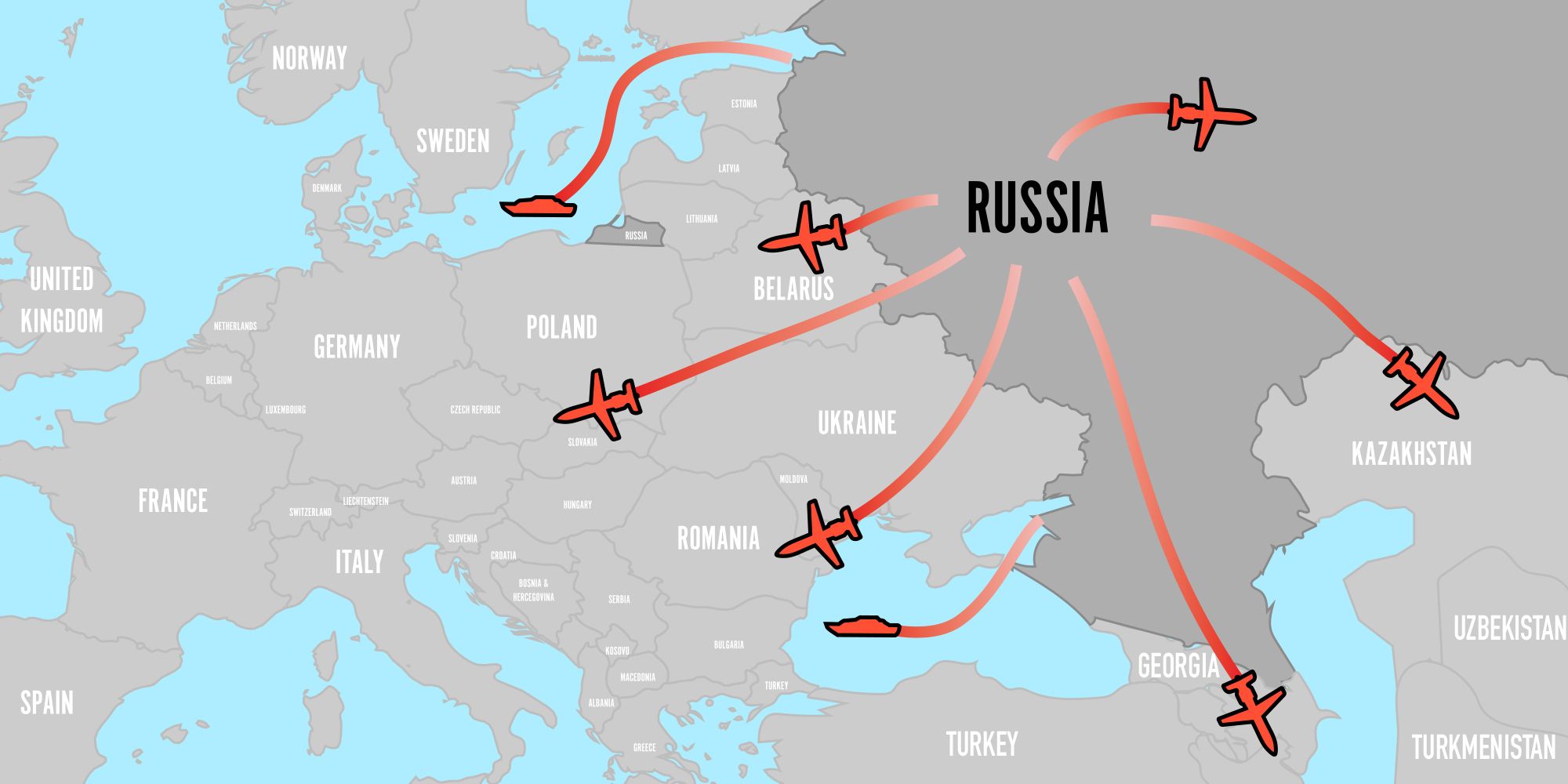 ADDED: it looks like the sanctions against average people started to work a little. Here's an interview with Baronova, a former head of a Russian state controlled news organization who just quit over this war. This is what she says, among other things:

I suspect it's a combination of being seen in a good light in the West and actual operational difficulties. Some companies have mentioned the latter too:

Burberry said it was putting all shipments to Russia on hold, due to 'operational challenges', adding that it was keeping a close eye on the situation.

Due to SWIFT restrictions combined with Visa/Mastercad boycott of Russia, and compounded with Bank of Russia's own FX and capital movement restriction that were imposed in response, international transactions are probably difficult or at least uncertain at the moment.

Also MAERSK essentially announced an embargo, so physically getting some products in may become a challenge.

Limiting losses, reputational damage in more important markets and avoiding extra costs are the key factors, but I suggest some slightly different ways of thinking about them to other answers.

Going one step further than some other answers, which euphemistically mention "operational difficulties", continuing trading put companies up against existing sanctions on the banking sector. It wouldn't look good in their core markets to appear to be breaking sanctions. It would also be costly to set up new payment arrangements.

With air sanctions in place and shipping sanctions increasing, getting goods to the market is going to cost more and take longer. By the time they've arrived, it's anyone's guess what the situation on the ground will be, but it's unlikely to be highly profitable.

On the other hand if trading conditions went back to normal soon, they could start selling/shipping again quite easily, there may even be some pent-up demand. This of course is far from likely, but it indicates that the losses from stopping trading now may not be so great in the long term.

The banking sanctions, transport sanctions, and economic conditions mean that profits would be hit pretty hard even if they carried on trading, so they may as well cut their losses.

Big Western brands in Russia will also be wary of retaliatory sanctions so won't want more physical property or money in Russia than they have to have. In other conflicts we've also seen businesses targeted both physically and electronically when they represent an ally of the enemy. This clearly threatens property and staff. Closing down operations reduces that risk in a way that staying open to sell existing (physical) stock doesn't. We're already seeing claims of hacker attacks on US brands from Russian groups. The US Cybersecurity and Infrastructure Security Agency is warning about threats from Russia-affiliated groups.

Anti-Putin researcher Sergey Utkin in Moscow interviewed on CBC said 6:35 here that the sanctions would mostly affect the upper middle class who will not be able to take a plane, but it is not much change for the bigger and poorer part of the population.
So it affects a particular class. I will not speculate what purpose that serves.
EDIT: I was assuming you were talking about government sanctions on exports to Russia. If it is just a business decision, then obviously there would be no point in giving up sales. Of course, there may be extralegal pressures from governments to stop selling.

Not the answer you're looking for? Browse other questions tagged economy russian-federation sanctions .

14
Can the current European sanctions against Russia have a significant effect?

6
Sanctions for Russian military action in Ukraine stopping preparation for G8. Is it important for Russia?
19
Why there was no Marshall plan for 1990s Russia?
3
Was there any change in perception of Militia/Police in Russia after the renaming?
4
Is there anything stopping countries negotiating trade agreements step-by-step?
1
What/Are there any boundaries to sanctions?
22
Why hasn't Russia or China come up with any system yet to bypass USD?
0
Is there anything the United States can do to stop the Taliban from selling American made military equipment to Iran?
2
Since the West will no longer allow Russia to raise money by selling sovereign debt, what alternatives does Russia have?
21
Are there any checks and balances against nuclear escalation in Russia?
9
Are there any official or stated end conditions for US/EU sanctions on Russia?