What is the public evidence about Russian claims concerning US promising non-expansion of NATO towards it borders?

During the recent 2022 conflict in Ukraine and the diplomatic talks preceding it, the Russian government kept saying that there were promises made by the US and the west that NATO would not expand eastward, although it was never written down.

Even this recent video at 3:58 mentions memos and meeting minutes from US archives that say that such an agreement did occur.

So is there any written proof from these archives which can be linked here (other than simply quotes from government officials from the time)?

This is highly controversial. You will find retired officials on both sides in support of both the 'yes' and 'no' positions.

At least acording to a document that was shortly published in german "Der Spiegel" such promis to not extend NATO was made. It can be read in this article. The document shows US, UK, French, and German officials discussing a pledge made to Moscow that NATO would not expand to Poland and beyond.

The picture of that document: 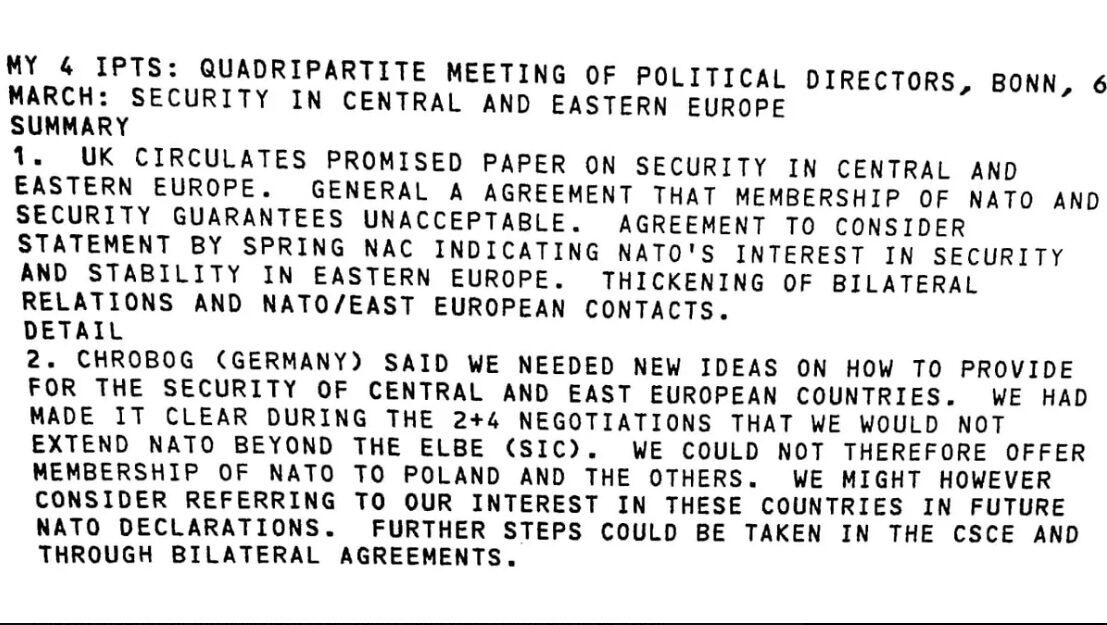 Some quotes of important statements which were made during that miting:

"We made it clear to the Soviet Union - in the 2+4 talks, as well as in other negotiations - that we do not intend to benefit from the withdrawal of Soviet troops from Eastern Europe," the document quotes US Assistant Secretary of State for Europe and Canada Raymond Seitz.

"NATO should not expand to the east, either officially or unofficially," Seitz added.

A British representative also mentions the existence of a "general agreement" that membership of NATO for eastern European countries is "unacceptable."

"We had made it clear during the 2+4 negotiations that we would not extend NATO beyond the Elbe [sic]," said West German diplomat Juergen Hrobog. "We could not therefore offer Poland and others membership in NATO."

20
What was the reason for extending NATO in the 1990s?
4
Did the United States break a promise to Russia when NATO moved eastward?

10
Russian government warned North Korea about the use of legal force against their nuclear threats. What is the general procedure in that case?
5
What is the Russian public's view on the US claims of interference in the 2016 US election?
31
What is the motivation for the expansion of NATO in Eastern Europe, including Ukraine, at the risk of starting a hot war with Russia?
11
What is the public perception in the USA and the UK about oil-rich gulf countries and their people?
8
What are some non-partisan sources about the relative balance of power in the Russia-Ukraine conflict?
51
Exit strategies for the Ukraine war