Why would Russian troops in Ukraine fly the flag of the USSR? And why would the Russian MoD advertise this?

From this video which appears genuine: 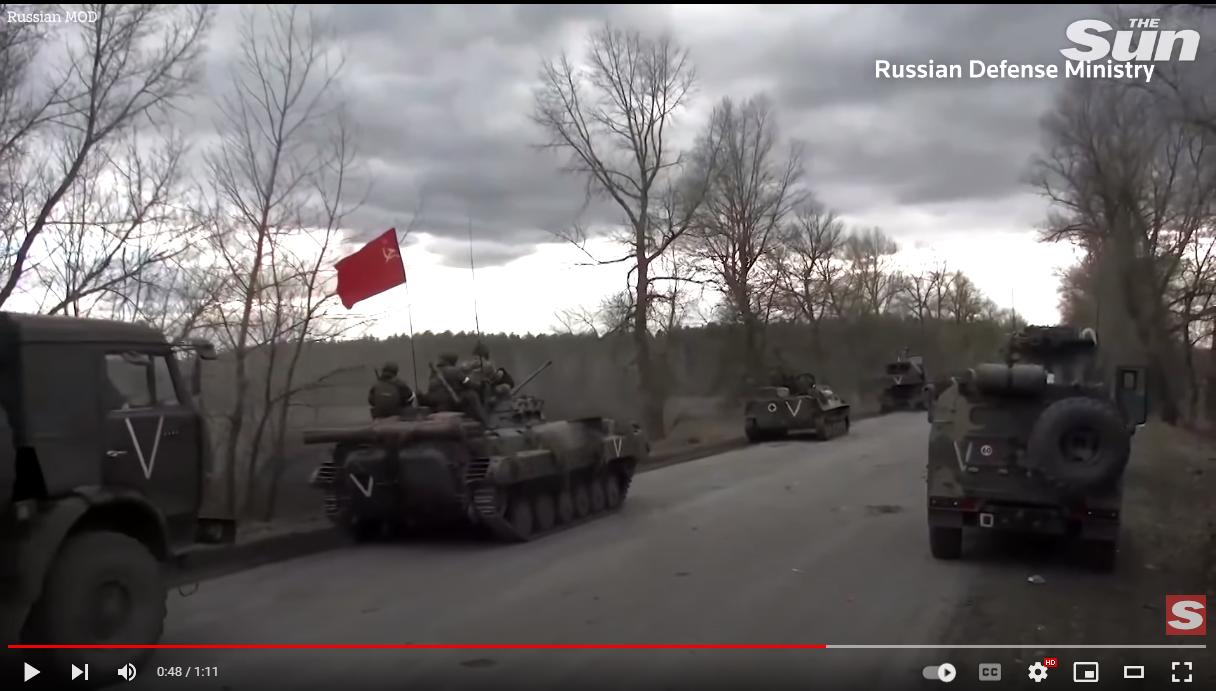 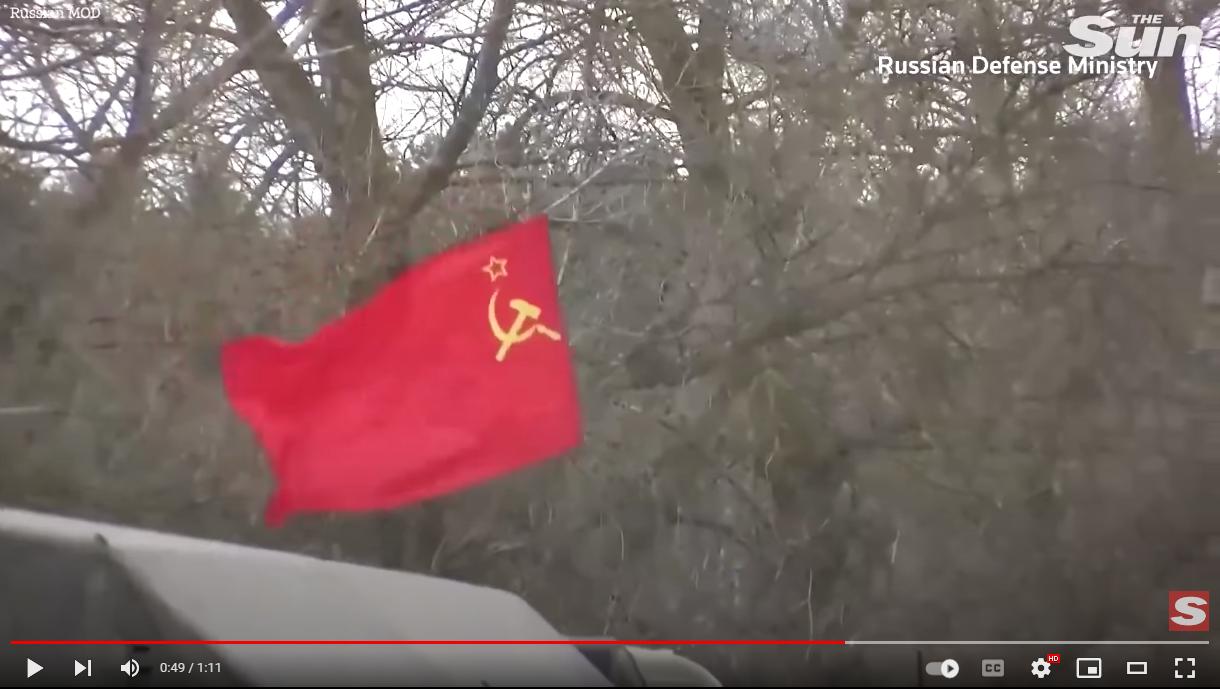 I'm miffed at why the Russian soldiers are flying the flag of the USSR. And why would the Russian Ministry of Defense advertise this?

A little more search finds additional images, from other sources 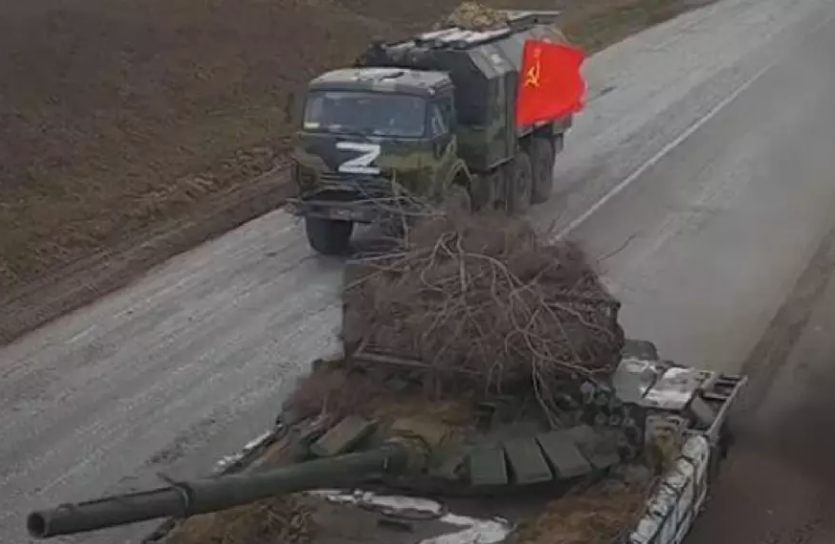 A Soviet flag was even spotted on an armoured vehicle in a video from the Russian Ministry of Defence and broadcast on their television channel Zvezda, identified by the red star logo in the top right of the video.

I see it as antagonistic by local vehicle crews, particularly those who look up to the myth of the old Soviet Empire.

Bit like you might see in other countries where they might fly the old flags of past era (Confederate flag comes to mind, but only because I can't think of others off the top of my head).

As other might say it is a morale booster.

Nothing more than that and given Russia's official voice (Russian Embassy on Twitter until very recently for example) I would think that they see it as not a negative to promote it.

The red flag on the tank was seen on February 25 in the push towards Kherson, and has been repeated many times.

And the other vehicles (APCs and trucks) flying it are from around 3-4 days ago.

Considering how hard the propaganda machine at home on Russian soil is working, a flying Soviet flag is like flipping the bird at the rest of the (sanction-flinging) world.

Also, ever since the Soviet Union collapse I see the old Soviet flag on a fairly frequent basis, usually with old timers who have good memories (or old Soviet patriots) and with new young Russians too. It reminds me of the campaign to bring back the old Soviet anthem, and the old flag was never far behind...

So, tbh, its nothing new and I was expecting it..

Additional side note, related to the above: 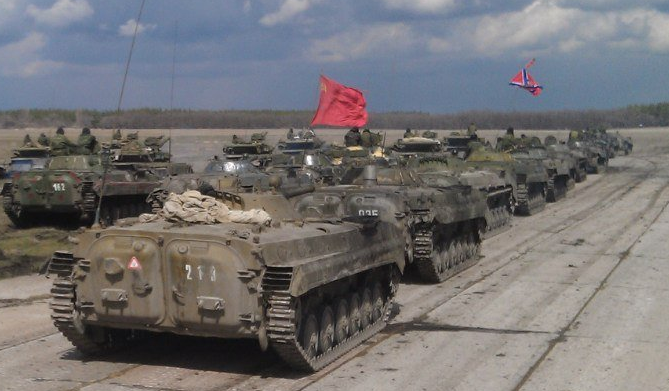 Following Putin's statement in an interview in 2014 that the territories of Kharkiv, Luhansk, Donetsk, Kherson, Mykolaiv and Odessa were part of what was called Novorossiya (New Russia), self-proclaimed DPR and LPR proclaimed the confederation of Novorossiya and their desire to enlarge this across southern Ukraine.

The above image appeared in 2015 during DPR and LPR exercises.

Maybe there needs to be more context given to the source of the Russian Defense video. What if they are not Russian troops but rather DPR/LPR troops instead. many would lump them together but I think the differences are important.

Given that it seems (without confirming) that much of the footage is of only a few vehicles and seems to be all from the south of Ukraine (for example the tank at Kherson dominates a lot of the reports) it is likely that the footage is of DPR / LPR forces or at least Russian sympathizers / supporters of them (more likely) - the Soviet flag has been seen most often in these parts: 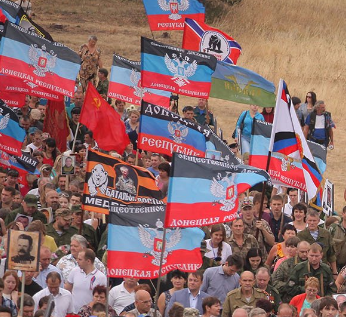 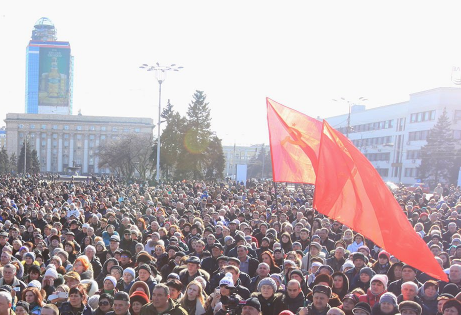 Not sure if this is a great source but should show the romanticism for past Soviet days in these southern regions:

For many of the people here the Berlin Wall never came down, or at least it shouldn’t have done. .. At pro-Russian demonstrations ... in different cities the modern day Russian flag, while popular, always takes a clear second place to the flags of the USSR and of the Russian Empire before it. The yearning for a vague idea of “glory” that will come with being part of a greater Russian “whole” runs through everything.

Brandishing a chest pin of Joseph Stalin, Eduard Basurin, deputy defence minister for the local pro-Russian militants, defends the former Soviet leader for raising the “USSR to a level when it was respected in the entire world”

I don't think this is a frequent occurrence, but I've seen it in the footage once or twice.

Psychologically, it should work in the following fashion:

So the display of the flag seems to be a small net morale booster.

They could also display the Imperial Standard flag (black/yellow/white) to roughly the same effect, which is paradoxal since its symbolic meaning in Russia is the opposite of that of Soviet flag.

While in the West this flag is only seen as a flag of USSR, in postsoviet countries, specially Russia this flag is more often called the flag of victory or Victory Banner.

And an other russian source tallking about the flag as Victory Banner. Here the translation of the article as it is:

The Banner of Victory was raised over the liberated Kherson

Residents of Kherson and the Kherson region of Ukraine waited for a peaceful life. Now this area is under the complete control of the Russian military, who are helping citizens return to their normal lives.

Head of News Front Konstantin Knyrik and a representative of Kherson raised the Banner of Victory over the liberated city.

“I am very proud that we managed to install the Banner of Victory today. Especially at a time when nationalists, fascist scum today in Kharkov demolished the monument to Marshal Georgy Zhukov, it is especially pleasant for me that we managed to do this on the banks of the Dnieper. My grandfather is a front-line soldier, and was buried in the Dnepropetrovsk region, and I really want to go to his grave, and I am sure that I will get there. It is especially symbolic, as for a Crimean, that this was done with a resident of Kherson,” Konstantin Knyrik said.

According to a resident of Kherson and the head of News Front, the Kherson region and Crimea remain one, and on May 9 there will be a Victory parade under the Banner of Victory with St. George ribbons.

From this article you can see how people from Russia or suporting Russia see this flag. Also it shows that Russian troops belive, they are liberating Ukraine from nazies the same way they were doing in Germany 1945.

And there is an official statement by Kremlin:

The Kremlin called the Victory Banner a sacred shrine for Russians

The Banner of Victory is a shrine for all generations of Russians, which has a sacred meaning. This was stated in an interview with reporters by the press secretary of the President of the Russian Federation Dmitry Peskov, commenting on the use of the red flag by Russian military personnel during a special operation in Ukraine.

“In our country, for all generations without exception, the Banner of Victory is a sacred thing. For many generations in many countries, especially the former Soviet Union, it is also a sacred thing that has a special meaning and literally sacred meaning,” the Kremlin spokesman said.

At the same time, Peskov noted that he had no information about the use of the imperial flag by the Russian military in Ukraine.

3
What flag is similar to the American flag but has 9 stars and 13 vertical stripes?
36
How would Ukraine joining NATO affect Russian security?
26
Why is it not an invasion if Russia sends troops into Ukraine?
21
Who is the Russian military commander in charge of the war on Ukraine?
1
Size of Russian forces including the National Guard deployed (and lost) in Ukraine
21
What are the flags being flown by this column of Russian tanks?
3
What does this black and white middle-part variation of the communist flag stand for?