Why is the South China Sea strategically important to the United States?

In June 2020, US Ambassador to the United Nations Kelly Craft sent a letter to the U.N. secretary general explaining the US position on China's "excessive maritime claims." On 14 July 2020, US Secretary of State Mike Pompeo declared China's claims and coercions of in parts of the South China Sea “completely unlawful”. On 26 August 2020, the US sanctioned individuals and 24 Chinese companies linked to construction and militarization of the artificial islands.

Why is the South China Sea so strategically important to the United States that it has to watch it so carefully and oppose the militarization of China there so strongly?

Please do note that I am asking from the point of view of the United States, not of China.

The United Nations Conference on Trade and Development (UNCTAD) estimates that roughly 80 percent of global trade by volume and 70 percent by value is transported by sea. Of that volume, 60 percent of maritime trade passes through Asia, with the South China Sea carrying an estimated one-third of global shipping. Its waters are particularly critical for China, Taiwan, Japan, and South Korea, all of which rely on the Strait of Malacca, which connects the South China Sea and, by extension, the Pacific Ocean with the Indian Ocean. As the second-largest economy in the world with over 60 percent of its trade in value traveling by sea, China’s economic security is closely tied to the South China Sea.

There's no getting away from global trade. Even if the US stopped trading with China, other Asian countries rely on those waterways to ship goods to places like Europe. Forcing transit further south would make products for expensive for everyone, including the US.

There's also lots of oil on the ocean floor

Developing the South China Sea’s energy reserves has proved problematic for decades, in part due to China’s sweeping territorial claims. China’s so-called “nine-dash line” encompasses much of the strategic waterway, conflicting with the various territorial claims of other Asian states, including the Philippines, Vietnam, Malaysia, Brunei and Taiwan. Reed Bank, like many other contested areas, falls within the nine-dash line. Under Duterte’s predecessor, the Philippines challenged China’s claim at the Permanent Court of Arbitration at the Hague, which ruled in July under UNCLOS that China’s claims are invalid. China has refused to accept the decision.

If China were to firm up its grasp, it could begin to exploit the oil resources and hamper global shipping.

US alliance in the South China Sea

The U.S. has no claim in the South China Sea, but has been highly critical of China’s assertiveness and insisted on free navigation of commercial vessels in the South China Sea is vital for regional and international trade. It conducted joint military patrols with the Philippines and Japan, Australia, and Indonesia. The alliance is growing due to the increased aggression and threads of China.

Several countries in the area, including China, the Philippines, Vietnam, Malaysia, Brunei and Indonesia, make overlapping sovereignty claims over the islands and maritime rights in the SCS. Figure 4 shows the overlapping sovereignty claims in the SCS, with China’s claims according to the 9 dash line doctrine in red. The area marked with a blue line is based on the UNCLOS 200 nautical mile Exclusive Economic Zone (EEZ) relating to each country’s claims and the islands marked in green are the ones over which sovereignty is disputed

China’s claims over the legal status and maritime rights of the 9 dash line remain ambiguous and outside of UN recognised EEZ claims. In particular China’s maritime law enforcement in the disputed islands and waters has disrupted regional stability; causing tensions between Vietnam after a clash between Chinese patrol boats and Vietnamese oil exploration vessels. In addition, tensions have been raised with the Philippines after assertive Chinese naval patrols which they described as ‘aggressive action’. 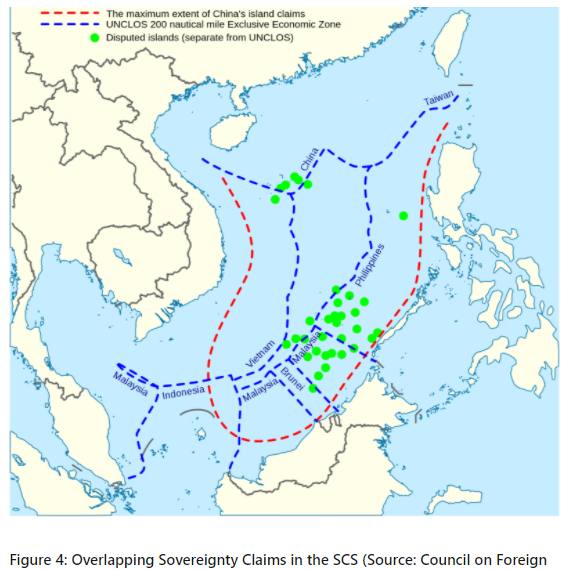 Strategic importance of the South China Sea (to the US)

The South China Sea (SCS) consists of over 200 tiny islands, reefs, shoals, atolls and sandbanks grouped in to 3 archipelagos – the Spratlys, the Paracels and the Pratas – Macclesfield Bank and Scarborough Shoal. The strategic importance of the SCS is mainly due to its geographical location, as the area is one of the world’s busiest and most strategic shipping lanes. More than 50% of world trade passes through the Strait of Malacca, the Sunda Strait and Lombok Strait over the islands and waters of the SCS amounting to around $5 trillion. More importantly, it also covers the most crucial energy routes for East Asian countries to transport oil and natural gas from the Persian Gulf. Therefore, the SCS has geopolitical and geostrategic importance for the energy and economic security of China and East Asian countries; but also for the USA as $1.2 trillion of its trade moves through the waters. In addition, it has proved oil and gas reserves, so the sovereignty of the disputed islands involves legal rights to exploit its resources. From a strategic perspective, the geographical significance of the SCS is that whoever has dominance over it, dominates the future of East Asia.

In 2010, the US declared its freedom of navigation in the SCS to be a national interest in response to China’s increasingly assertive posture. In 2012, Vietnam and the Philippinessought to consolidate their partnership and alliance with the US in order to enhance their strategic position over SCS disputes. Therefore, the US plays a key role in influencing the resolution of the SCS disputes. Vietnam and the Philippines have also attempted to form a ‘strategic alliance’ with Japan in their struggle with China in the SCS.

Not the answer you're looking for? Browse other questions tagged united-states international-relations china .

10
Why is Taiwan strategically important to United States (besides being dominant in the semiconductor manufacturing)?

9
What is the historical basis for China's claim on the South China Sea?
5
What are the US's major goals in the South China Sea?
10
Can US ban China from the islands?
11
Why is China annoyed at the installation of THAAD in South Korea?
64
Is Japan still bound by the terms of its surrender in WWII?
34
Why is the United States voluntarily funding the World Health Organization 60 times more than China?
2
Where to find a summary of US FONOPS in the year 2020?
8
What is China's objective in militarizing the South China Sea?
10
Why is Taiwan strategically important to United States (besides being dominant in the semiconductor manufacturing)?