Why is Ukraine not stopping the transit of Russian gas in the context of its demand to boycott Russian gas?

As can be seen in this article from Germany, Zelenskyj calls for a gas boycott from Russia. At the same time, there is the transit of Russian gas through Ukraine. So why is Ukraine not stopping that transit, if they don´t want Germany and other European countries to buy Russian gas?

A translation of the main part of the linked article:

KIEV. Ukrainian President Volodymyr Zelenskyy has called on the Germans to boycott Russian gas and other goods. "Without trade with you, without your companies and banks, Russia will not have the money for this war," the 44-year-old said in a video message shared on social media on Monday. Nobody has the right to destroy peoples and divide up Europe.

This question is completely different than this one, it is in context of the request made by Zelenskyj and described in the article. It is not about speculative possibility of Ukraine stopping the transit.

Apparently the question was reopened because

Nord Stream II is out of question now.

Well, maybe. If Ukraine does something dramatic and blows up the pipelines, NS II could be quickly opened. Its approval process was just suspended, as far as I can tell. The pipeline is fully built.

It's also worth noting that some countries like Hungary already seem to bypass Ukraine more than before by getting more of their Russia gas via the other fairly new pipeline from Turkey (through Bulgaria and Serbia--opened in Jan 2021).

Under the deal, Gazprom would ship 4.5 billion cubic meters of natural gas to Hungary annually, allowing the supply of around half of Hungary's annual gas consumption.

Some of these Eastern EU countries like Hungary and Bulgaria did give their half-hearted approval to the EU to send weapons to Ukraine, but they completely ruled out sending any weapons themselves. Hungary even blocks any weapons for Ukraine from even transiting Hungarian territory. If Ukraine does something to annoy these countries even more, Hungary could e.g. start blocking EU decisions on helping Ukraine, which by the way, they used to do with regard to Ukraine's NATO membership.

And probably even Poland, Slovakia, and Romania, which are sending weapons (or at least ammo in Romania's case) to Ukraine, would object to suffering a sudden energy crisis since they still get a sizeable fraction of their natural gas from Russia, via Ukraine.

By the way, according to one analyst, NS2 was supposed to be the "final nail in the coffin" of gas transit through Ukraine, given the other pipelines that Russia has built in the meantime:

the role of Ukraine is smaller today than it was in the late ’90s. There was a time when 90 percent of the gas that comes from Russia to Europe went through Ukraine. Now it’s less than a quarter. So all the stuff people say, like “Nord Stream 2 is going to kill Ukraine and [gas] transit,” like, yes, Nord Stream 2 is the final nail in the coffin of a Ukrainian transit story that has been in demise for 25 years.

According to the same source, cutting EU's gas imports from Russia would hurt the EU more than Russia, because the latter makes relatively little profit from natural gas relative to oil sales. (Although no figures are provided.) Somewhat simplified pipeline supply explanation map, from the Economist: 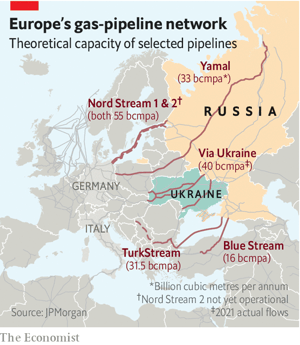 The EU itself is trying wean off the Russian gas, but...

One of the biggest hurdles to replacing so much gas this year is securing enough LNG.

The [EU] Commission says around 10 bcm of gas imports could come from alternative pipeline suppliers, while 50 bcm would be LNG. That is equivalent to around 10% of annual global LNG supply.

"Obtaining this volume will be difficult: 50 bcm would represent a major additional draw on an already-tight global LNG market and additional demand cannot be met by significant new capacity before the mid-2020s," Jesse Scott at German-based thinktank Agora Energiewende said. [...]

U.S. exporters have shipped record volumes of LNG to Europe for three consecutive months, at prices at least 10 times higher than a year ago.

The cost (for the EU) of entirely replacing the Russian supplies has been estimated at around one hunderd billion euros per year, given current prices.

The decision to purchase gas (or anything else, for that matter) from Russia is viewed typically as a decision that can only be made by each sovereign country that wants to buy the said gas. And, of course, Russia must agree to sell that gas, and the two parties must agree on the price and other specifics, etc.

It is not up to Ukraine or any other third party to break up a business contract such as this. In fact, insufficient energy supplies may create conditions conducive to internal unrest and regime change in the affected countries, and could be viewed as interference in the internal politics of these sovereign countries. Would Ukraine want to play kingmaker in, say, Germany, which supplies Ukraine with aid? Unlikely. Hence, the gas will continue to flow as long as there are gas buyers and gas sellers. All Ukraine can do is ask the German government to stop buying Russian gas (note that German population is mostly sympathetic to Ukraine).

Remember that allegedly or actually committing war crimes is not viewed uniformly as a reason to terminate business contracts with the offending country: Nazi Germany maintained excellent business relationships with many companies from the "civilized" countries, while committing war crimes, which were widely reported in the world mass media.

Germans approve of government U-turn on Ukraine: https://www.dw.com/en/germans-approve-of-government-u-turn-on-ukraine/a-61011528
To drive, or not to drive: Germans rethink love of cars: https://www.reuters.com/business/autos-transportation/drive-or-not-drive-germans-rethink-love-cars-2022-03-18/

Hitler's American Business Partners (2003) - A detailed, well-referenced, and chilling look at American multinational corporations who fuelled and profited from the Nazi movement before and during the US involvement in WWII. Including Standard Oil, Texaco, Ford, GM and IBM. [00:48:15]: https://www.reddit.com/r/Documentaries/comments/tk0k15/hitlers_american_business_partners_2003_a/

Not the answer you're looking for? Browse other questions tagged ukraine sanctions gas .

12
Why doesn't Ukraine use its control on Russian pipelines as negotiation leverage?

29
What plans do European countries have if Russia closed gas pipelines to them?
2
How does Nord Stream II project fit with Ukraine-EU relationship?
9
Communicating the Nord Stream 2 sanctions
26
Why is it not an invasion if Russia sends troops into Ukraine?
26
Why did EU fail to reduce their dependence on Russian natural gas?
15
Can the current European sanctions against Russia have a significant effect?
9
Why does Zelenskyy urge NATO to impose a no-fly zone?
8
How is Ukraine getting their gas since the Russian invasion?
2
Any adverse effects/repercussions due to Ukraine's "serious snub" of German president Frank-Walter Steinmeier lasting longer than a few news cycles?